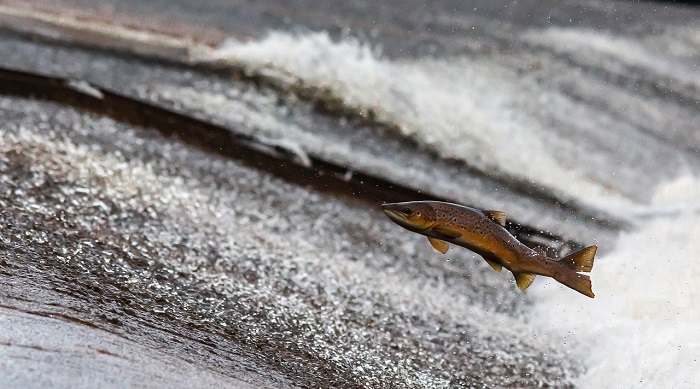 Fish symbolism is present in various human societies, traditions and cultures throughout the history.

While one the most common association with fish as a symbolic creature is its Christian interpretation, it is important to note that fish symbolism has developed many centuries before people even had an idea of something like religious system in form we know it today.

Fish mythology and symbolism is present in old civilizations of Asian continent, in Ancient Egypt, in Nordic societies, in Native American folklore and so on. Salmon fish families live in northern parts of the Atlantic Ocean and also northern areas of the Pacific.

Salmon symbolism is closely related to this specie natural habitat, so most of beliefs about this interesting fish originate from traditions native to these parts of the world. A part of salmon symbolism could be associated with that of overall fish symbolism.

Salmon fish are known to be extremely fertile specie with certain strange habits. Let us find out more.

One specific characteristic that differs salmons from other fish is that this specie could live in both salty ocean water and fresh river basins. Salmons are naturally predisposed to feel comfortable in both environments, because their natural behavior is also a bit unusual.

Salmon little ones first live in fresh river waters and they spend two years that way.

After two years, they swim down the river to the ocean. Once they are about to produce offspring themselves, they would return to rivers.

Salmons are known for that special ability to swim against the water, which as unusual characteristic for any living creature. Salmons’ ability to move upstream makes them inspiring and symbolically very interesting animals.

Not only we are fascinated by salmons’ behavior, but also many people enjoy eating its coral colored meat. It is characterized by delicious structure and taste and taste considered a delicacy.

In addition to being very tasteful, in old times, some societies have believed it has special powers.

Actually, people believed that qualities already ascribed to salmons, such as strength, fertility and others, could pass on those who eat salmons’ flesh. In modern times, it is still considered tasteful, very healthy and it is generally a pricey one. 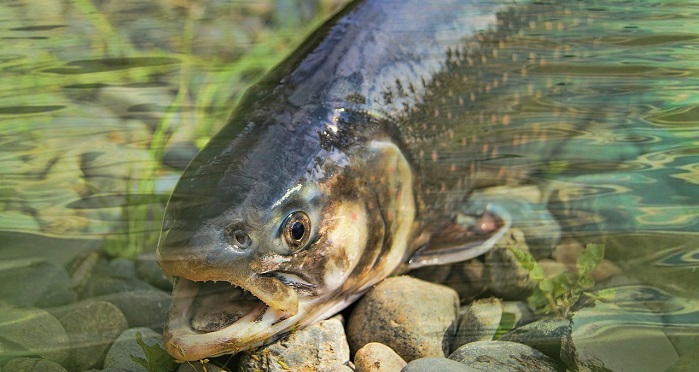 Salmon symbolism is tightly connected to traditions of peoples’ living in areas where salmons are native species.

Salmon beliefs are featured in Nordic myths, in Celtic folklore, in Native American traditions and certain stories are found in Scottish and Welsh sources.

In old Celtic tradition, salmons were believed to be magical animals with special powers.

Celts believed salmons are guardians of deeper knowledge and great wisdom that a mortal could not gain and comprehend on their own. There is an old legend telling about how the Celtic mythical hero Fionn gained the Salmon’s wisdom.

According to the legend, the one who was actually meant to gain this divine wisdom was Finegas, one of the most popular characters from Celtic myths. The way to gain that incredible power was to catch and eat a salmon.

However, it was not Finegas who caught the fish, but his companion Fionn. While Fionn was preparing the meat, roasting it, he accidentally burnt a finger.

He immediately sucked the painful spot to ease the discomfort and, since he has already touched the salmon flesh, all the wisdom passed to him, instead of Finegas.

The legend also explains why exactly the salmon possesses such divine knowledge and wisdom. The legend tells that there once was this salmon and that it ate some magical nuts, in which all that magical and mysterious knowledge was preserved, and thus gained all of it.

In Norse mythology, salmons are associated with the deceiver god Loki. Loki is one the dominant deities in Nordic pantheon, known for doing all sorts of tricks, in order to get something that he wants. Loki is also known for his shape-shifting activities.

According to the legend, he murdered Baldur, who was much loved by other gods.

Loki used the shape of a salmon fish, while trying to get away from Thor’s rage. However, Loki was not that successful in his trickery, so Thor caught his, while in a salmons’ body.

All salmons are recognizable by a specific line on their backside. This pattern was a consequence of Thor’s not that gently touch on mischievous Loki.

All Native American societies are known for nurturing special bonds with the Mother Nature and everything the Earth has given to people. They were feeding on salmons’ delicious nutritive flesh, so they were also grateful for such a precious food source.

Salmons’ flesh was known to give great energy, thus many symbolic meanings were ascribed to this fish.

Native Americans believed not only salmon flesh gives them strength and energy, but they have also associated this animal with higher existence, wisdom, knowledge, persistence and harmony with nature.

They thought of salmon as magical living creatures with great powers and worshipped them as good spirits and sacred totem animals.

Salmon symbolism is mainly positive, since concepts associated with these animals are some of the most appreciated by people all around the world.

Salmons represent knowledge and wisdom, just as we have seen from these legendary stories mentioned, but they also stand for fertility, abundance and fortune.

Salmons are associated with endurance, persistence and determination, as well.

Probably the most important symbolical value associated with salmons is wisdom. Magical properties of salmon flesh are mentioned in several different traditions and it is believed that a person who eats salmon meat could gain some of the special powers these fish are believed to possess.

Not only you could get deeper knowledge, but you could also become stronger and have more luck in life in general.

Salmons are associated with endurance, persistence, dedication and determination, because of their specific natural path of behavior. Salmons are steady in their natural instincts and they see to fulfill their natural tasks.

Symbolically, we see this behavior as being determined and focused on our goals. In symbolical sense, salmons live according their destiny and are capable of enduring and overcoming obstacles.

In addition, salmons represent transformation and adaptation. As we have learned, they change their environment and they successfully adapt to different living conditions.

Figuratively speaking, we could literally say that salmons feel like ‘fish in the sea’ everywhere they find themselves.

They are also associated with toughness, strength and flexibility.

Salmon totem offers you an amazing spiritual guidance. This spirit animal possesses qualities most of us would love to have and you have a spiritual guide that will teach you how to get them.

Spirit of the Salmon teaches us to be in harmony with the world around, not to resist its nature.

However, salmon totem does not teach you to be obedient and indifferent, but to embrace the life with your hands wide open.

Salmon totem wants you to believe you are capable of conquering obstacles you see impossible to overcome. Salmon spirit gives you strength first to accept difficulties that are in front of you and then helps you bravely to overcome them.

Spirit of the Salmon brings luck and fortune and teaches you always to be determined and positive. The life goes on, no matter what you do; sometimes you have to swim upstream, while other times, it is best to surrender to waves of destiny.

People guided by Salmon totem are cal by nature, peaceful and good hearted. They find it easy to adapt to any change and they are not afraid to make necessary changes themselves.

Although they are not known to act thoughtlessly or in rush, once an idea reaches its final shape, they do not hesitate of making a change that would turn their world upside down.

Salmon people are friendly and relaxed. They like to make friends and spend much time with their closest ones, such as family. Their approach to life is genuinely optimistic. They do not deny bad things and do not seek to avoid troubles.

On the contrary, they have courage to face them and they strongly believe life always brings rewards to those who dare.

Individuals born under this totem are very brave and loyal. They would never abandon others on behalf of their own needs. They do not seek glory or perfection, but believe that life is perfect exactly the way it is.

Salmon people know that you need both patience and speed and that the crucial thing you have to learn is to make balance between the two.

Finally, they are capable of making their lives well balanced and harmonious, because they are intelligent. They learn through experience and value every single step they have ever made, be it backwards or forward.

Salmon people know how to organize their lives and they do not like chaos.

They are thoughtful and confident and, in addition, they have a lot of understanding and appreciation for others.