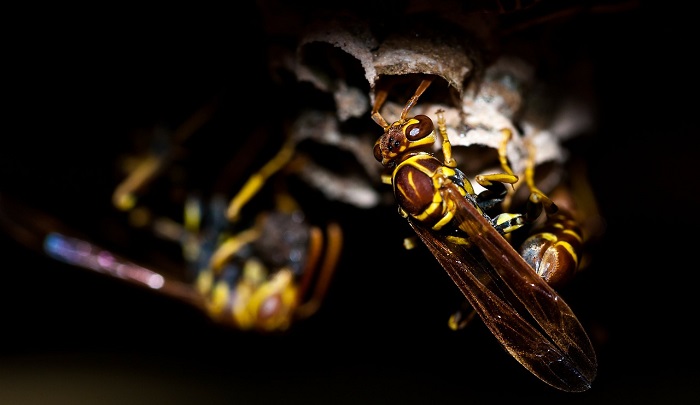 Bees are considered a sign of good luck and prosperity all over the world. They are cherished for their personal characteristics, as well as for the products of their diligent work, like honey and other related products, such as pollen.

Bees represented an important symbol in many cultures around the world since Antiquity.

They were also considered as messengers from the spirit world. It is believed that bees are keepers of secret knowledge, symbolizing immortality and wisdom.

Bees in Ancient Egypt were considered a symbol of death, birth and resurrection. In Ancient Greece, bees were connected to the nymphs because they shared the same places with them, such as hollow trees and empty caves. They were often symbols of goddesses and priestesses.

In Christianity, monastic communities were often compared with beehives, because of the virtues bees possess, such as courage, cleanliness, selflessness, chastity, sociability, wisdom and spirituality.

These insects have many virtues. They symbolize abundance and attracting fortune and wealth into one’s life. They also symbolize industry and productivity.

A bee landing on one’s hand is considered a great lucky omen. Don’t scare the bee away. Let it leave when it desires. Thank it for bringing you news of money and abundance coming into your life soon.

A bird landing on your hand is also a sign of success and good fortune you will soon experience. It is bad luck to scare the bee away.

The beekeepers have very strong bonds with their bees. It is believed that no harsh words should be spoken in the presence of bees, or that people shouldn’t quarrel next to beehives.

Such behavior is considered a bad omen, which can cause the bees leaving the beehive. It is also believed that the person using the bad language around bees could get stung by the bees. 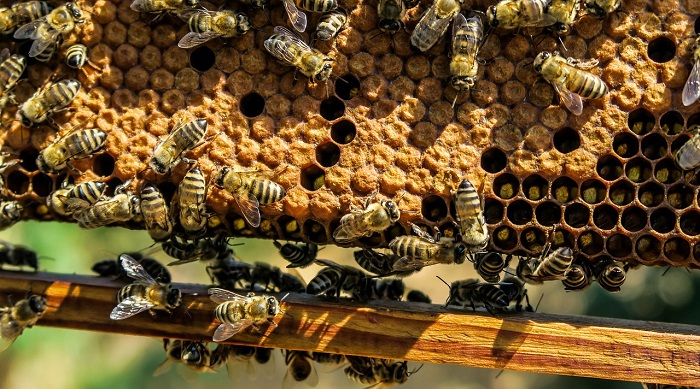 Is A Honey Bee Nest in the House A Good or A Bad Sign?

Because they have such a good symbolism, the question is whether a honey bee nest in the house should be considered a good omen or not?

The answer to this question is not simple. Bees are wonderful creatures, but the fact remains they can be dangerous because they can sting us, and for people who are allergic to their sting, they could cause grave health problems and possible death.

No wonder why people are not as thrilled to discover a honey bee nest in their garden, or some other place in our around their house.

The good thing is that bees rarely make their nests near people. So before asking this question, you better check whether the nest in your house is actually inhabited by bees or some other insects, like wasps, which is a more common occurrence.

Wasps’ nests are different from bees’ nests. Bees have nests with built in wood fibers. They don’t have protective covers over their nests like wasps do, and that is the reason they need to hide them well.

So, if the nest you found in our around your house is visible, that is a clear sign that it doesn’t belong to bees.

There isn’t a reason to panic and do anything if you discover a honey bee nest in your house or somewhere around it. You need to know the fact that bees avoid people and won’t intentionally harm you.

If they aren’t exactly in your way (which is most likely true), try not to disturb them and live in peaceful coexistence with them.

To make it easier and avoid potential accidents, it would be wise to protect the house windows with insect nets, to try not to put sweet drinks on outside tables, avoid making haste movements when the bees are around you, to try to avoid the space where the bees nest is; altogether, do your best to keep the honey bee nest intact.

If bee stings cause you an allergy, or you realize that despite of all, you cannot cohabitate along with bees, the wise thing to do is call a specialized service to remove the nest. That way you can prevent unnecessary risks of someone getting bitten and prevent harming of the bees.

The fact is that finding a honey bee nest in your home is a very good omen, symbolizing wealth and prosperity for your household. Because of that symbolism, it is believed that a honey bee nest shouldn’t be removed from your house.

Bees are creating liquid gold – honey, and that is why it is considered that through that analogy they will bring the abundance in your home as well. The nest is a sign of good fortune awaiting you in the near future.

Because of such a good symbolism that bees have, people often keep bee hives behind their houses to attract that positive and abundant energy into their homes. It is believed that they will bring progress to the house near which they live.

That is one of the reasons it is believed that is bad luck to remove their nests.

If you decide to remove the nest anyway, do it respecting their home and transferring them to another safe place. It is important not to destroy their nest while relocating it.

If a bee enters your home, it is also considered a bad omen to kill it. Avoid it if you can and let the bee out alive and well. Symbolically, the act of killing a bee would represent jeopardizing your wellbeing and prosperity in some way.

Bees are insects we should respect and protect.

They are a good sign to see, especially flying around our house or inside our house. Their appearance marks the end of difficulties we are currently experiencing. They could also indicate the abundance coming our way.

We could suddenly receive some prosperous opportunities which will make us wealthier. They also indicate satisfying relationships within your close community.

To conclude, a honey bee nest in house is a good sign, indicating success, wealth, prosperity and other good things.

Removing it is considered bad luck, but if you need to do it, call a professional or do it with extreme care, to avoid accidents and to avoid damaging the nest.

Bees are noble creatures whose products have the ability to heal us, humans. Because of that, and because of all of their other traits, we should respect them and protect them.

They are God’s gift to humanity.

People from all times recognized that fact and respected and honored bees in a proper manner. There is no reason we shouldn’t follow their example.