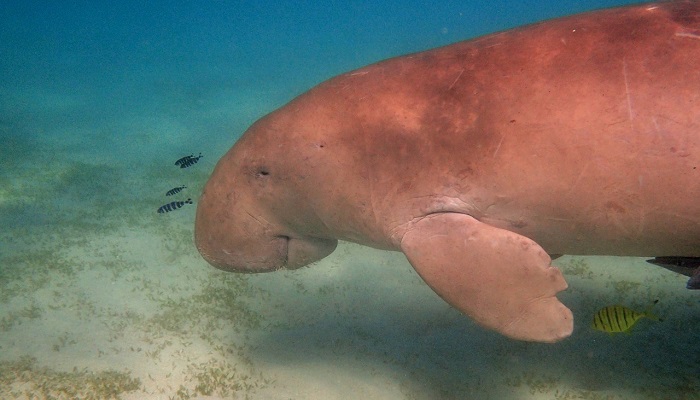 Manatees are large marine mammals belonging to the animal order Sirenia. It is believed that the animals in this order evolved from land mammals around 60 million years ago.

They are herbivorous animals, which can reach up to 3 meters in average length and around 600 kg in weight. Females are usually larger than males. Manatees are also known as sea cows.

The reason is their peaceful grazing on marine plants. They eat different freshwater or saltwater plants. They usually eat up to 15% of their body weight per day.

That is why they usually graze around 7 hours each day.

Manatees have flippers which resemble paddles. They have large and flexible upper lip, which they use to collect food and for communication. They replace their teeth many times during their lives.

They are mostly solitary animals. They spend around half of the day sleeping under water.

They go to the surface to breathe air in intervals of around 20 minutes.

When they are awake, they graze water plants in the shallow waters.

They are not fast swimmers, with an average speed of up to 8kmph. They are known to speed up to 30kmph on rare occasions.

Manatees are considered intelligent animals able to learn. They possess a long-term memory. They resemble dolphins with these abilities.

They usually breed once in two years and give birth to one calf. 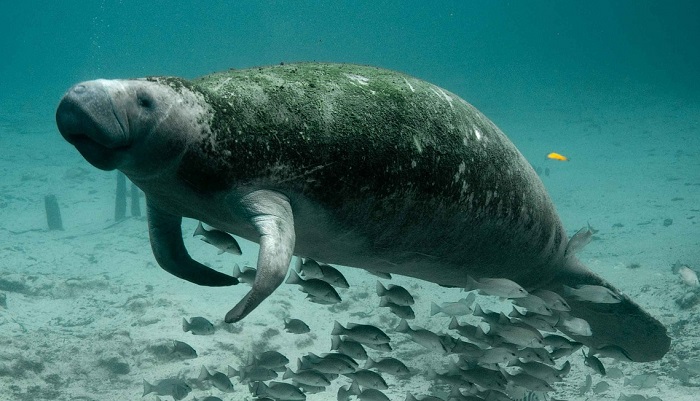 They have different sounds to communicate with each other, especially for communicating with their young.

Manatees usually live in shallow sea and rivers. Some species are accustomed to living in both fresh and salt water. They are considered endangered species.

They don’t have many predators in nature and their main enemy is the human influence, mostly destruction of their habitats.

They are often victims of collisions with boats. Many are scared severely and some die because of the injuries. Their hunt is prohibited by poaching is still a problem.

What does the Manatee Symbolize?

The manatees are often linked to the mermaid folklore.

In Africa it is thought that once they were human beings and their killing was prohibited, punished and considered taboo.

They symbolize many different things, such as lying back and relaxing, taking our time, slowing down, confronting our emotions, contemplating important decisions.

The Meanings of Manatee as a Totem Animal

The Manatee totem has many different meanings. Some of them are:

Surrender and trust. The manatee totem is teaching us to have faith that things will work out in our best interest. They are teaching us about surrendering to the circumstances and trusting in the best possible outcome.

Slowing down. The manatees move slowly through the water. This spirit animal is reminding you to slow down and relax. Enjoy life. Don’t get overwhelmed with duties you don’t need. Find time to do the things you enjoy.

Manatee as Your Totem Animal

If a manatee is your totem animal, you are most likely a calm and peaceful individual who has such influence on other people as well. You believe that every issue can be settled in a civilized and peaceful manner and you follow your beliefs.

People love you and enjoy spending time in your company because you have a calming and soothing effect on them.

You love people but you are sometimes a loner. You need your time to relax and contemplate some important themes which interest you.

You are very emotional and you are not afraid to demonstrate your emotions even risking being hurt. You are not scared of being vulnerable. You are aware that vulnerability is the path of clearing emotional blockages you possibly have. You hardly ever stress about anything.

Sometimes having this totem signifies your laziness and tendency to procrastinate. Maybe you lack ambition and drive to succeed.

What if Manatee Appears in Your Life?

The manatee is not an animal which can often be seen, so when it comes into our lives it represents a great significance and carries an important message for us.

This totem animal is often calling us to allow ourselves to be emotional and even vulnerable.

By doing that we can confront some issues we might have been avoiding for some time. That will remove the blockages which have prevented us from moving forward with our lives and getting what we want.

The manatee could help us get rid of some unwanted things and people; everything which isn’t good for us. That will open up some new opportunities, some of which were long awaited for.

The manatee is also calling us to have faith that something better is coming in our lives and that the difficult period is about to end. It is asking us to believe that we are on the right path and that our desires and goals are manifesting.

This totem animal is also reminding us to listen to our intuitive guidance and seek answers from within.

When to call on Manatee?

You should call on manatee totem when:

Dreams about Manatee – Interpretation and Meaning

Dreams about manatees are rare. If you do dream about them, that dream usually reveals something about your personality.

Maybe you tend to be passive and retreat in situations where you need to demonstrate determination and decisiveness. Maybe you lack ambition and you are lazy.

Sometimes this dream symbolizes some person from your surroundings.

If you dreamed of many manatees, that dream could be a reminder from your subconscious that it is time to take a vacation and relax.