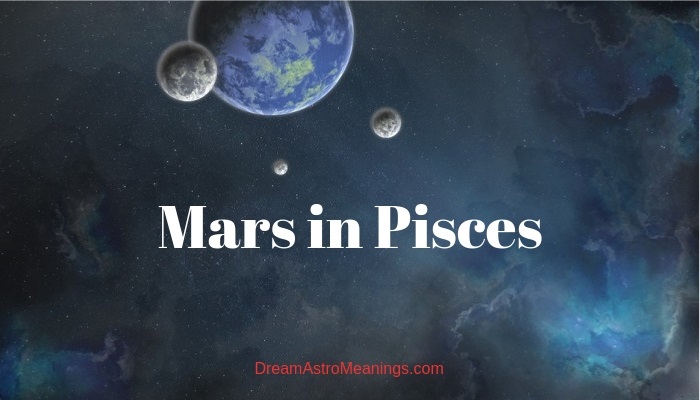 The planet Mars is not a large planet, but it has a powerful influence. This planet follows Mercury, which is the smallest of all the planets in the Solar system.

The surface of this planet is covered with a red substance, which causes its reddish color.

This red iron dioxide on the surface of the planet Mars, is the reason why it is often called “the Red Planet”.

This planet has many similarities to our planet Earth. Many theories exist about the existence of life on Mars in the distant past, and many people believe that life on Mars will be a fact soon.

The name Mars comes from the name of the homonymous god from the ancient Roman pantheon. The Roman god Mars was predominately the god of war and agriculture.

This planet rules the signs of Aries and Scorpio, and it has the strongest power while it is in these two signs.

Every sign it transits through adds its trait to this planet. Mars travels through a sign in about a two months period.

In this article, we will give some of the main traits of people who are born with Mars in the sign of Pisces.

Men with Mars in Pisces are often daydreamers. They are usually withdrawn and shy, and often hide that fact with a mask of disinterestedness and aloofness. These men are usually introvert and don’t relax easily in the presence of strangers.

There are exceptions, but these exceptions usually come from some other influences in their natal charts.

Most of these men have the need to protect their privacy from people they don’t care much about. They can be prone to distorting the truth and even lying to accomplish that.

These men are not very passionate, but they have strong emotions which they become apparent once they commit to someone.

They are loners who prefer spending time on their own. They need to have their own space to do their own thing. These men often isolate themselves from the rest of the word so they could contemplate about the great Universal truths.

They can lack focus and determination as well as perseverance to finish their goals, and prefer to have someone by their side to encourage them and boost their confidence to overcome these negative traits of their personality.

Many of these men unfortunately deal with their weaknesses by ignoring them and putting themselves into altered states of consciousness by using drugs or alcohol.

Women with Mars in Pisces often fall in love with men with Pisces traits. These women often fall for men who have addictive personalities and are weak. They often end up pulling these men out of these negative life circumstances.

These women can also have similar traits, and ignoring their issues and weaknesses by doing something harmful to their health or life in general.

They are very emotional and prone to illusions in their love life. These women tend to avoid making decisions and procrastinate. They avoid doing their duties sometimes to the last moment and often not being able to finish them in time or in a proper manner.

These women are often happy when they are alone and have a tendency to isolate themselves from their surroundings for some time. They need that, to recharge their batteries.

They are often very creative and have some artistic talents. The thing which mostly causes them problems in life is their lack of persistence and determination to pursue their goals.

They often give up and change their mind about an idea even before they begin putting in action into manifesting it into reality. Giving up before starting something, is one of their main negative traits which prevents them from using their full potential, and causes them to waste their talents and time.

These women are not aggressive and often avoid expressing their opinion about matters. They don’t like conflicts and confronting other people. These women rather listen to others than talk.

They also don’t have organizational and leadership skills. They can be confused and forgetful, which usually comes from their inability to focus properly on a subject.

Mars in Pisces is not in a great position for Mars to be placed in because Mars is peregrine in Pisces. Peregrine means that a planet is neither strong nor especially weak, but rather neutral.

In Pisces, Mars certainly doesn’t receive the energy qualities which it receives from some other signs.

This powerful planet in the passive sign of Pisces creates people who have a kind and complaisant personality. This sign usually blocks the energy of this planet and prevents it from demonstrating its full potential.

The sign of Pisces is introvert and that energy doesn’t fit well with the dynamics of the fiery Mars. These people don’t have the energy which Mars in its full potential provides and are usually introvert and shy. Even if they are not shy, these people are often very closed off and it is not easy for others to get through their armor.

They have a need to protect themselves and their privacy at any cost. They often appear mysterious and difficult to know well.

These people can be prone to hiding the truth, and possibly lying. The reason for their behavior could be their need to protect their private matters.

They can be lost in their imaginary world, and not be very aware of the reality which surrounds them. These people are usually very emotional and easily hurt, and that is why they often feel the need to protect themselves.

They are not very rational and certainly not practical, unless they have some other planetary influence in their charts. They are often prone to daydreaming and wasting a lot of time on things they will never put in efforts to achieve.

People with Mars in Pisces are often creative and artistically talented. They are usually not very organized and tend to miss fulfilling their duties. They also don’t have a good sense of time, and tend to waste it on futile matters.

They can also be lazy with a tendency to postpone their duties.

They are often not confident enough and that prevents them from achieving their full potential. They often need someone with more strength to be their support and encourage their actions. These people are usually not leaders, but followers.

Their main issue is lack of ambition and drive to pursue their goals. They can be successful, but that usually comes through a number of circumstances, rather than through their effort and initiative.

They usually have a strong drive to travel and experience new cultures. Their drives are often long-distance ones. They love expanding their knowledge, and especially enjoy developing their spirituality through the new insights they gain during their travels. They are often very deep and philosophical.

Mars in Pisces is ruled by the planet Neptune, which is the natural ruler of the sign of Pisces.

Neptune is a planet of mystery, illusions, the dream state, and similar matters. In this sign, Mars doesn’t have a clear picture of its desires and goals, and tends to change its mind often.

These people usually cannot keep their attention on things, and they often get bored easily.

They can be mesmerized with something or someone one day, and be completely cold and disinterested the other. This often happens because of their tendency to idealize things and people, and disappointments when they realize that they had a wrong impression.

The sign of Pisces and Neptune its ruler, rule our subconscious content, dream states, our fears, isolation, illusions, hidden enemies, hidden matters, alcohol, drugs, addictions, etc. People born with Mars in the sign of Pisces can lack self-esteem and confidence. They can be prone to depression and hiding from life through some addictions.

They often have weak characters and are prone to be influenced and manipulated by other people. These people often appear naïve, but in some cases, they are the ones using other people’s naivety for their own purposes.

People with Mars in Pisces can be shy and withdrawn. They often put themselves into some kind of isolation, and in general love being alone, even the ones who are sociable types and don’t have a problem being around a lot of people.

One of their main problems which they should overcome is their tendency to postpone decisions and avoid making the initiative. These people are often not very talkative and prefer listening to what others have to say. They are very adaptable as well and prefer accepting the guidance of other people instead of following their own.

They are usually not combative and tend to retreat rather than enter into a conflict with someone. Although these traits are good in general, the advice for these people (especially men with Mars in Pisces) is to strengthen their personality and willpower.

These people need to learn to stand up for what they believe. It often seems that they live their life going with the flow instead of actively participating in its creation.

Many of these people begin feeling as victims because of their lack of strength and will. They sometimes feel as if others are depriving them of something, failing to notice their guilt and part in that. Many of them carry repressed anger inside, and that is something which they need to deal with by confronting the reasons behind that anger.

These people are often not very passionate but are very emotional. They have a vivid imagination and their imagination is usually helpful when they do some creative projects or when they are creating their art.

People born with Mars in Pisces are often introvert and prone to isolating themselves. There are many potential reasons for their isolation, and one of the most important ones is their desire to keep their privacy to themselves.

They also need time alone to contemplate about matters that are important to them.

These people are very emotional, and always fear the possibility of being hurt by someone. That is another reason why these people love to keep their distance.

They are prone to giving up in the last moment and abandoning their projects and ideas before accomplishing them. It is a thing they should work on changing because they often end up missing some wonderful opportunities due to their lack of willpower and confidence in their abilities which will ensure the success of some project or an idea they have.

They often waste their time on daydreaming. They are very imaginative and that helps their creative efforts. They are very talented but often lack the confidence and determination to make the most of their talents, especially their artistic talents.

In some cases, these people can be prone to lying and manipulating others. They usually do it to protect some interests, but some of them do it to get what they want.

They often get frustrated because of their inability to finish what they have started and get offended when someone reproaches them about that.

They should work on resolving their weaknesses so they could make the most of their talents and all their abilities.