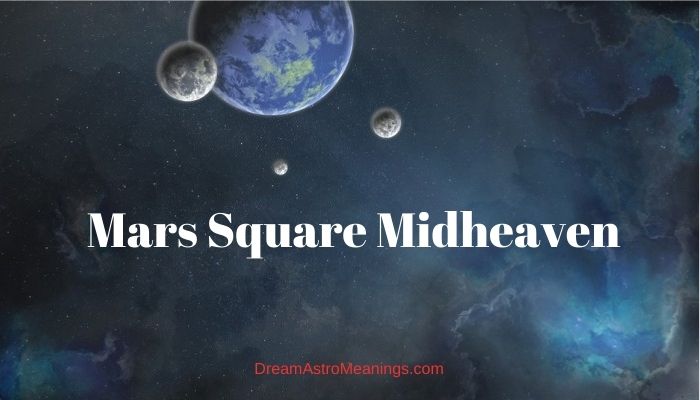 Although the square is not considered a fatally negative aspect, but symbolizes the energy blocked by the circumstances of life, which must be revealed by positive actions, it is Mars that aggravates work on oneself.

An intense connection with the planet of war is always explosive conflicts and quarrels.

Considering that the Meridian of the Midheaven indicates purpose and professional success as a path to glory, it turns out that the realization of a native goes through thorns of disputes, strife, battles and unforeseen involvement in confrontation with the powers that be.

These aspects symbolize bad relationships with parents, family, and bosses. Constant quarrels and conflicts can fundamentally shake both office and family affairs.

Often, such people transfer all their domestic troubles to the work environment and vice versa, which greatly prevents them from advancing both in their careers and in housebuilding.

Their emotions constantly overshadow the voice of common sense. There is a tendency to conflicts with representatives of the law and government officials.

This is a strong dominant person who achieves success at any cost and willingly overcomes any obstacles.

Such a person sometimes even makes fun of a situation in which the chances of success are not so great.

He loves difficulties and loves to overcome the insurmountable. Nothing can stand in the way of this fearless individual’s path to success.

Sometimes, because of his strength, people try to avoid collisions with him.

He clearly lacks tact and diplomacy in communication. There may be problems in relations with superiors.

The roots of a conflict-minded attitude towards bosses are hidden in early childhood, when it seemed to him that one of his parents was trying to control him.

When he can achieve certain success and establish himself at a sufficiently high social level, it will be easier for him to overcome a strong need to be above others.

Then he will become more compliant. (Mars squared with Midheaven).

Bad relationships with parents, family, boss. Quarrels can shake professional and household chores. The tendency to transfer domestic troubles to work and vice versa, which interferes with other areas of life.

They need to follow not emotions, but common sense, the tendency to conflict with representatives of the law and the state.

Often, against their will, they are drawn into military affairs, for example, they are called up.

The conjunction stains the destiny and the professional and social life of the native with “martial” features. It predisposes to a battling destiny, marked by great “victories” and “defeats”.

Throughout his life, he will show great courage and develop enormous activity, but he will also run many risks and dangers.

For this reason, it favors professions such as the military, police, firefighters, athletes, bullfighters, mechanics, surgeons or butchers.

The native is very competitive in his professional life, he always wants to be first and always has enemies or rivals to defeat.

To give an example, we can find this aspect in Augusto Pinochet’s Solar Natal Chart and if we also see Mars badly aspected, we can understand his dictator character.

The harmonic aspects develop the best face of Mars, favoring the professional success of the native through feverish struggle and activity, as well as the possibility of defeating or annulling his adversaries or enemies.

They also favor your possibility of creating a home and an independent position. Grants aptitudes for command. We have an example in the birth chart of Russian President Vladimir Putin.

The dissonant aspects do not cancel out the best values ​​of Mars, although they tend to externalize a little more it’s more rough or aggressive face.

It predisposes to tensions and conflicts in work and social life, and gives the native a tendency to defy authority.

It can also lead to quarrels and conflicts at home or with the family, and a bad relationship with parents or with their bosses at work. He can be defeated by his rivals or enemies, or lead through life in a foolish way.

Unconsciousness of him can lead to financial loss or professional failure. We have an example in the birth chart of the politician and philosopher Karl Marx.

If Mars or the 10th house is in the signs of Aries, Leo and Capricorn, and there are references to the 12th house, the matter will not do with simple quarrels. Armed clashes, fights, jail and defending interests are likely to die.

This is why it is important to work out the tension of the square at the root. The nature of the native from childhood is manifested by a tendency to dominate and appropriate everything that is associated with status and prestige.

If the planet of war is in the 7th house, then the enemies will be insidious, and the native will have to spend half of his vitality on fighting them. In fairness, I must say that he himself turns those around him into enemies with a half turn.

Family members also fall into this category, on whom the average owner of a horoscope generously pours out the resentment accumulated at work.

Strong anger and a thirst for destruction provoke failures at work, and competitor’s altogether because a desire to destroy them at the root together with the business; momentary needs and weaknesses interfere with the fulfillment of long-term goals.

erroneous recording of people trying to help and keep from reckless actions as enemies; envy of those who early and easily achieved success or those who are higher on the social ladder by birth; striving to appear confident and strong through aggressiveness and harshness of actions.

Egocentrism of character in impudent self-promotion without taking into account the consequences for relatives and colleagues; the desire to curry favor with the authorities through a demonstration of personal superiority, which often becomes the reason for dismissal and termination of the contract.

If the general horoscope and the position of Mars are in harmony, the potential of the square will help to become successful in military circles.

However, with a negative color of the card, violent involvement in social unrest is likely, ranging from forced conscription into the army due to failure in university exams, ending with getting into “hot spots” as a direct participant in events.

One of the parents brought up the native from a position of aggression, severely punishing for insubordination and ignoring the desires of his soul.

Most often, the mother has a quick-tempered and wayward character, considering the world a dangerous place and showing the child that the only way not to be beaten is to hit first.

Childhood is spent under conditions of obedience or all-round opposition to strict rules. After adulthood, this translates into tough conflicts with anyone who tries to build the owner of the Mars-MC square according to his own rules, even if such a system is good for him.

Although options are possible here. Men with this aspect understand the strength of the army and want to become authoritative in this area.

For the sake of such a goal, they are ready to temporarily obey, but having received a high rank, they turn into a tough commander who drills subordinates.

On the other hand, their bravery, courage and determination help command respect even without draconian rules. Girls with a Mars-MS square find it difficult to obey men.

They compete with them, deliberately choosing non-female professions, and they are trying to prove their leadership to their spouse. It is contraindicated for them to work with their husband in one place.

Working out the Mars – MC square Impulsive actions can ruin a career overnight.

Therefore, it is necessary to think over the tactics of behavior at work, achieving a balance of their desires and the requests of management.

Team sports will relieve excess stress. There is no need to constantly challenge others for no reason, the main thing is to compete with yourself, striving to become better than you were a year or a month ago.

The desire to be a leader especially burns from the inside after graduation and at the institute is embodied through real success in studies and sports, which smooths out the tension in spiritually developed individuals with a general harmony of the horoscope, with an abundance of trines, for example.

But if squares and oppositions prevail, a person does not see other options how to work with his elbows and roughly defend his boundaries.

Here rudeness, assault, public scandals and forbidden methods of climbing to the top of power are manifested, which appear later in any matter important for the bearer of the Mars square – MS.