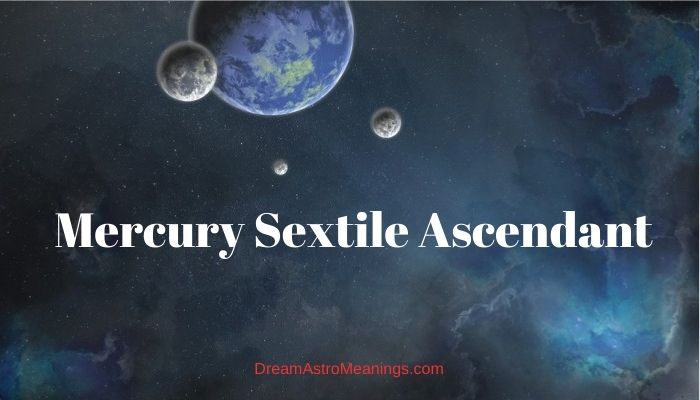 Mercury is the planet that is closest to the Sun; it is never far from it – at most twenty-eight degrees – and, therefore, in a natal chart it is always located in the same sign as the Sun, in the previous or the posterior one.

Mercury represents the archetype of siblings, children, adolescence, family, parents, neighbors and also, on the other hand, it is related to communication, intellect and learning.

In this article we will focus on this second part.

When we talk about Mercury in psychological astrology, it is to explain the psychological characteristics of the person in terms of how they communicate, how they learn, how they interpret things, how they perceive the world, how they understand experiences, how they exchange information, what abilities they have to connect ideas, write or convey a message, how you move and also what skills you have for trading.

And it is that Mercury governs the mind, language, thought, communication, information, education, learning, mental logic, wit, humor, eloquence, and also the hands and arms.

It is a planet that moves at a very fast and highly variable speed.

So it is not surprising that people who have a strong Mercury in their birth chart have a lot of mental activity.

Regarding learning, depending on the Sign, the House and the Aspects that each person has in their birth chart, we can appreciate if they are more or less curious, what topics interest them, how they interpret the world and if they learn more or less quickly, for instance.

A mercurial person will feel like the eternal learner full of illusions to always learn new knowledge, whether through reading, signing up for different courses or looking for information on the internet.

In fact, mercurial people need to know everything and about everything. It is something very characteristic, for example, in journalists, who constantly ask themselves the questions of “who, what, where, when, why and how”.

And how do you know if you are a mercurial person, that is, if you have Mercury as an important planet in your natal chart?

On the one hand, Mercury rules the sign of Gemini and Virgo, so if you have Mercury in either of these two signs, or the Sun or the Moon or many planets, this already makes you a mercurial person.

Draw your letter for free at www.cosmograma.com/cartas and there you will be able to visually see what I am talking about. But although Mercury rules both Gemini and Virgo, their energy is different depending on the sign.

The sign of Gemini is diurnal, Yang, it moves information outwards and belongs to the air element, so it makes it more sociable, connecting and objective than Virgo energy.

Gemini people have a dual character, they are explorers and often have a hard time maturing because, like children, they like to play, not go deep and not take anything seriously.

In addition, they are very curious people, they have an easy sense of humor, they do different things at the same time, they like to sign up for the more activities the better, you can see them talking about very different topics, they have argumentative ability and being very agile mentally they are also persuasive. His negotiating and selling energy can sometimes make Gemini people resort to sham or lies.

On the other hand, their well-managed potential makes them people with a great transmitting and associative capacity, being capable of being great bridges between very different realities through language and even between the unconscious and conscious world.

The sign of Virgo is nocturnal, Yin, it moves the energy inwards to analyze and assimilate it, it is feminine, receptive and of the Earth element. His way of expressing himself and communicating is concrete and pragmatic.

The great talents of Virginian people are the ability to organize, discern and discriminate information to transmit it later in a totally useful and practical way. They are people who materialize the information after having investigated, analyzed, discriminated, shredded and ordered it.

Being an earth sign, unlike Gemini who is air, he has more common sense and seeks to make whatever activity he is doing very useful and productive. Virgo’s mercurial energy is methodical and decisive.

In addition, a person with Virginian energy has the great ability to observe things in detail, identify patterns and find the “mistake” or the necessary piece that is missing or out of place.

Then he will correct the “error” through the execution of a practical and useful methodology. All this is done to improve the system you are observing and analyzing, since one of the purposes of your

It is important not only the exact degree of the ecliptic to which this sign rises, but also the entire zodiac sign to which it belongs.

As a result of the continuous movement of the Earth, the angle of inclination of the ecliptic in degrees changes every four minutes. Bearers of the same zodiac sign born more than four minutes apart may have a different ascending sign.

The angle of elevation of an ascending sign on the map denotes a dense line of electromagnetic energy passing into the astral body. It is well seen by people with clairvoyance. Most people do not know the exact time of their birth. Even parents are surprised when asked to remember exactly what time the baby was born.

Practicing astrologers use various methods to deal with this problem. A calculation is possible based on the dates of vital events: the first serious illness, accidents, death of parents, marriage, birth of a child, etc.

Another method is based on comparing the positions of the Houses and the relative positions of the stars and planets in the horoscope of a person with his social status, character traits, type of work or profession and financial situation. If you know the moment of conception, you can find out the ascending sign on this basis.

An ascendant or an ascending sign (these terms are equivalent) is an important element of your horoscope.

The Ascendant is a sign that reflects your external behavior; it largely determines how the world around you sees you. Outside is the key word for your ascending sign as it represents the outside of your personality. Using modern language, we can say that this is your image.

Very often it turns out that the ascendant is responsible for what the world sees in you first of all, what is the first impression you make.

Many astrologers believe that the rising sign reveals you more directly than the sun sign. The ascendant is compared to the door of a house, the entrance through which the visitor must pass in order to see the house itself.

The face that a person demonstrates to the world around him is a fusion from the sign in which the Sun is located, with the ascendant. This combination defines the unique impression that you make.

The Moon sign is associated with more hidden aspects of your personality. This influence is deep and all-encompassing, but others feel it in your character rather than see it lying on the surface.

Since the ascendant is a sign that rises above the horizon at the time of your birth (hence the term “ascendant sign”), it reflects the moment when your independent life in this world began. It characterizes your interaction with others, your individual communication style.

The mercury in the horoscope symbolizes the ego and vitality of a person. With favorable aspects, it is a leader who inspires with creative energy and optimism of family and colleagues.

Ascendant – a sign that rises in the east at the moment of birth, shows a social mask: the image through which the native interacts with society, in public during performances, business contacts and communication. The sextile between the main star of the horoscope and its rising symbol is a special luck that contributes to a brilliant ascent to the heights of any chosen field of activity.

A person will be active, bright, confident and self-sufficient, regardless of the signs of the zodiac, where the participants of the aspect are located, if he is able to fruitfully use all the esoteric advantages.

The beneficial influence of the two factors of success is so great that even the squares and oppositions of the horoscope serve as a springboard for takeoff, and not an obstacle. The native’s sincerity and openness win over. He does not hold a stone in his bosom and frankly expresses his opinion.

The tactfulness of self-expression depends on the signs where the Mercury and the Ascendant are located: Aquarius, Sagittarius, Scorpio, Aries and Leo can be sarcastic and straightforward, offending sensitive interlocutors, without even wanting to. But they also express admiration vigorously, without embarrassment of emotions.

The talents of the owners of the Mercury – Ascendant sextile are revealed faster in a competitive environment. It does not cause them anger, but a cheerful sports excitement, contributing to maximum concentration in practice.

Working alone on freelance, the wards aspects easily succumb to laziness and absent-mindedness, making mistakes that later hurt self-esteem, so they are shown to work in a large team and a large company in politics, business, and charity. From the spheres of creativity, the acting path is suitable.

Love and relationships with sextile Mercury – Ascendant If the native manages to avoid narcissism and pulling attention to himself, then he will not find a best friend and partner for marriage. It is difficult with solar Lions, Scorpions, Aries, born to rule and command.

The ascendant in earth and water signs softens the pressure of narcissism, but nevertheless, not all of the native’s chosen ones will agree to second roles, because he likes beautiful outwardly artistic natures striving to embody a high purpose.

Quiet and homely workers will not attract the attention of the owner of the natal chart.

The secret is that the talents of the Mercury-Ascendant sextile are revealed precisely in relationships.

Bearers of the aspect in love, regardless of gender, perform feats and miracles of creative achievements, inspired by the energy of love and passion.

Without this, they fall into depression and do not embody even half of what they are capable of. Women should develop gentleness and flexibility in relationships with the opposite sex, since their energy in this aspect is more masculine.

This ensures success in a career, but in marriage provokes strife and conflict. A native with a weak position of the Mercury will be able to professionally take place on stage, otherwise it will not be possible to get used to the role.

With a strong position of the daylight, it is better to become a director not only in cinema and theater, but also an organizer of political events.

The main thing is not to forget that the karmic task is to follow noble goals and carry out a high mission precisely along the line of social work.