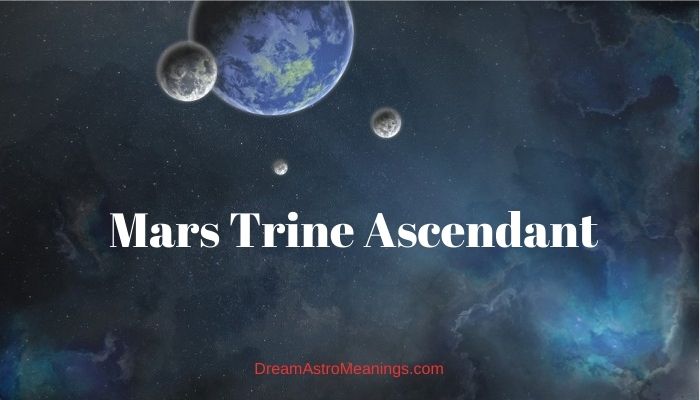 Aggressiveness, striking force, attract attention and influence the environment, love competition, want to play a major role. They have muscular strength, some roughness.

A tendency to hasty actions, if there are no strong Mercury and Saturn, do not think about the consequences, they want to change everything in their own way and for the sake of their goals.

They are offended for interference and despotism, it all ends in tension and isolation. Diplomacy is needed. Mars in conjunction with the ASC – you are a brave self-confident person, you have an adventurer spirit, and you go where the angels are afraid to tread, and voluntarily accept any challenge.

If Mars is not in some passive sign (Cancer or Pisces) and creates only a few difficult aspects, you are nothing frightening, and you are able to withstand a lot of physical stress.

With or without tough aspects, regardless of sign, you are talkative or even chatty. If these abilities are used correctly, you will excel in any field that requires eloquence and ease of expression, such as jurisprudence, theater, politics, or religious activity.

You are too self-absorbed and have a hard time collaborating with other people, if at all. You usually work on your own. You should learn to control your irritability and tendency to conflicts and scandals. You love sports, and if you have not become an active athlete, then at least you are a passionate cheerleader in all competitions.

If Mars is in the 12th house, some of the above-mentioned abilities are hidden or were directed to their own personality in youth, but sooner or later they will manifest.

Mars, ASC trine, trine in the natal chart Strong constitution, will, determination. Their directness and strength earned them respect, trust and cooperation. Active life, quick reaction, they achieve a lot. Physical strength and ambition are especially good for men, as these are their qualities.

Mars in trigone sextile with ASC – you are independent, self-confident and have a strong will, are not afraid to express your ideas and opinions aloud. Your creativity is expressed through travel (especially if Mars is in the 3rd or 9th house), in these areas you can get quite creative. You always answer the challenge, give your whole heart to any work.

You are mostly friends with men and strive to show yourself as a courageous person, even if you are a woman. Do not like when demands are made on you, but in many cases you yourself do it in relation to others.

Are aggressively committed to personal or social relationships. Hence the problems in marriage and contacts. They are not liked. Disappointments can lead to rampage, blindness, crazy thoughts that they must fight for their goals. With a bad horoscope – hooligans, forcing them to obey their will. To overcome this aspect, you need affability and diplomacy, suppression of impulsiveness.

Mars in square-opposition-quickens with ASC are the strongest aspects of the zodiac.

However, learn to channel this energy towards productive areas and try not to throw power into the wind. Sometimes this force can cause health problems such as neurosis or stomach ulcers, especially if Mars is in the 4th or 6th house.

If Mars is in the 3rd or 10th house, you often have to struggle with your own violent temperament. Used properly, this planet Mars gives great ability, both mental and physical, and allows you to work harder and harder than other people.

For this, it is important to know all the perspectives of this impact on life: initiative, straightforwardness and categoricalness in dealing with people, ingenuity, and activity; bright charisma that evokes sexuality, a masculine type of behavior in women and an emphasized independence from public opinion in men.

But often in quarrels and conflicts, you sacrifice tact and diplomacy, you love to compete and always respond to any challenge.

It often happens that you attract people who later create difficulties for you, but this does not seem to be a problem for you, because these are the only people you respect.

You should learn to give in, so you can connect your energy with someone else’s and achieve great results.

The ascendant is the intersection of the ecliptic and the mathematical horizon. The sign in which this point was at the time of birth is considered the sign of the Ascendant or ascending sign.

In fact, the Ascendant sign is a sign that rises at the time of a person’s birth.

As already clear from the definition of the Ascendant, its position in the horoscope depends not only on the date of birth, but also on the place and time of birth.

Unfortunately, no, but in astrology there is a technique that allows you to establish the exact time of birth by events that have occurred in a person’s life (the so-called rectification of the time of birth). And after the time of birth has been established, it is not difficult to calculate the sign of the Ascendant.

The main meaning of the Ascendant is the intersection of our world of everyday things and events with the world of spiritual meanings and higher values.

The fact that each person evaluates the surrounding life and the inner world in his own way is symbolized by the Ascendant.

Such people are very proactive and adventurous, they love to engage in joint projects and participate in group activities. Others help them to work creatively, in turn, they also do not remain in debt.

They are frank and straightforward, bright in their statements and strong in dealing with people. This gives them the respect of colleagues and the support of acquaintances.

The reactions are quick, the attitude to everything is extremely active. Such people always strive to compete with force with circumstances and usually win, while everyone remains content and happy.

Such a person is independent, self-confident, has a strong will and is not afraid to express his own ideas and opinions aloud. Inventive and quick to make decisions.

Effective in travel and meetings. He always answers the call and gives all his heart to any work.

Mostly friends with men and accentuates masculine traits in character. He does not like it when others make demands on him, although he himself constantly expresses various claims to others.

Trigon gives good luck that accompanies a person through life. This applies in the case of an active social position that allows the development of talents indicated by the participating planets of the aspect.

When the Ascendant is touched, then you need to work out the abilities associated with the zodiac sign and the ruler of the 1st house, but the key direction is set by the planet that creates the trine.

If this is Mars, then the native is gifted beyond measure with physical strength, endurance, will and desire to win.

Determination and straightforwardness here do not irritate, but inspire confidence and a desire to follow a brave and bright leader.

Ambition and responsibility for the wards make a man the undoubted leader of social groups, but complicate the life of a woman who will not be content with home, but will rush into battle, or make a career to the detriment of her family.

Life seems to be an exciting adventure, and the native goes to victory with the infectious enthusiasm of an athlete, which sets himself the goal of conquering peak after peak.

Especially restless are the owners of Mars and the rising sign in Aries, Leo and Sagittarius. They will never sit quietly at home, devoting themselves to high social goals.

There is no aggressiveness and the imposition of one’s opinion at any cost, but the carriers of the Mars-Ascendant trine will not retreat from their plans either, they will simply enter from the other flank. They are wonderful leaders of political and military structures, entrepreneurs, athletes, reformers and bankers.

For men, this is an aspect of a sex symbol with the charisma of a brutal superhero, and for girls it is played as the cold charm of a lady boss, although it is difficult for them to show a purely feminine charm.

People under the auspices of the trigone work equally effectively alone or in a team. They do not need someone else’s approval, but with redoubled enthusiasm they storm the peaks under admiring glances.

Aspect gives tremendous power to influence society, but it needs to be able to manage.

For this, it is important to know all the perspectives of this impact on life: initiative, straightforwardness and categoricalness in dealing with people, ingenuity, and activity; bright charisma that evokes sexuality, a masculine type of behavior in women and an emphasized independence from public opinion in men.

Quick thinking, reactions, fearless and effective behavior in stressful situations, especially if there is a positive connection with Pluto or the 8th house; the ability to recover in a short time after defeats and psychological shocks; the ability to make money easily: from any opportunity that comes along, capital is created in stages.

If Mars is in the 12th house, some of the above-mentioned abilities are hidden or were directed to their own personality in youth, but sooner or later they will manifest.

Trigon holders prefer to live in the present day, and their strategies for achieving success are short-term, so when they cannot quickly fly to the desired peak, they can become overly aggressive and assertive, which causes problems with others, and especially with higher ranks.

Men and women with this aspect more than anyone else need bright and enchanting sex. For them, this is not only closeness with a loved one, but also a release of negative tension, a reboot of the brain and just a genetic need for relaxation.

Therefore, they lead an active sex life even without falling in love with partners, and they offer rapprochement already at the first meeting if they have unsatisfied desires. They will be faithful only with a long, warm and trusting family union, because they do not dramatize the purity of the relationship. S*x for them is like a sport without a romantic background.

At the same time, they are really unrealistically attractive for the opposite sex, even if they are not handsome by nature, but the inner fire of passion and surging energy attract the most interesting and promising partners to them. An example of the owners of the Mars – Ascendant trine is Brigitte Bardot, Jack Nicholson, Pamela Anderson, Whoopi Goldberg, and Christopher Reeve.

The carriers of Mars and Venus in the signs of fire and air are suitable as companions of life. Practical interaction with the trigon Mars – Ascendant.

It is important for the native to avoid the temptation to do everything and always on his own.

After 30 years, the potential for strength gradually begins to decline, and by this time it would be good to learn how to delegate boring and tedious tasks to assistants, and to do interesting things yourself that warm up the fire of inspiration, not forgetting about hobbies and hobbies.

The passion of the owners of the Mars – Ascendant trine is closely related to the accumulation of energy, therefore, they are suitable for activities in a competitive environment – business, politics, cinema and theater.

To harmonize the inner state, it is useful to practice gardening and woodcarving.

The native’s luck color is red. This is worth taking into account when going to an important business meeting or date.

Protection from enemies and happy meetings with partners suitable in all respects will also be provided by jewelry with pomegranate, coral, rub other, spinel and hematite.

It is better to set them in a simple metal – iron or cupronickel.