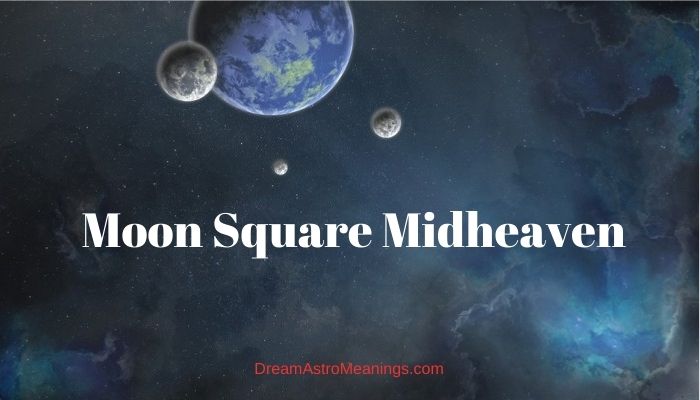 The square with the Midheaven Meridian creates incredible tension in the human soul, especially when it is impossible to fulfill the plan for a long time, faced with obstacles of the external and internal plan.

In developed and conscious individuals, the intensity of passions promotes movement forward at all costs, in weak-minded individuals, their hands give up and destructive programs are turned on.

Among the celebrities, there are a lot of people with an abundance of squares with MCs, who have become an example of courage for millions. Therefore, it is important to work out the aspect correctly in order to avoid trouble.

The main problem of the owners of the Moon – Midheaven square is eternal dissatisfaction with work, family and the inability to combine these directions harmoniously.

A person wants to shine in society and bask in the attention of relatives, but domestic troubles are reflected in work, and career failures lead to nervous breakdowns in loved ones.

If there is a choice between love and promotion, it will be in favor of professional success. The native’s subconscious periodically storms so that loved ones do not recognize it.

This happens in stressful situations regarding the affairs of the house where the Moon is located, and of course this is especially pronounced in the wards of the water elements.

Their behavior is shocking and hurtful. If they are disappointed or angry, it goes to everyone, even though the gift of empathy allows them to be sensitive and attentive to the problems of others, but only if they are satisfied with their lives.

This happens rarely. Men and women with the Moon square – MC dream of becoming famous for their good deeds and charitable projects so that others admire their generosity, but without working out the qualities of character and emotional reactions, they become famous in connection with negative incidents or scandals.

fate constantly puts before a choice: to please yourself or push your dreams into the background, fulfilling the desires of loved ones; quarrels and disputes with business partners, denial of compromise, even for personal gain; the need to work hard and hard to get the desired results in the profession.

After working out the spiritual qualities, the carriers of the Moon-MC square enjoy the attention of those around them in the company of friends and at business meetings, they boldly speak in public, but they become prone to emotional outbursts of anger or indignation when faced with injustice or disappointment in love.

Personal relationships Most of all men and women with this aspect would benefit from the support and love of the mother.

However, she makes too high demands or treats children coolly, taking care of herself. She may have ambitious plans for a native.

Frequent expressions of dissatisfaction with regard to the lack of giftedness or looseness of the child gives rise to many complexes, which will then have to be worked out with a psychologist. There are a lot of difficulties in family relationships.

On the one hand, there is a strong emotional attachment to loved ones, on the other, pickiness, irritability and the habit of pouring negativity onto them.

The lack of mutual understanding and emotional compatibility is especially pronounced in men with the Moon square – MC with his wife.

Girls with such an aspect are infantile, creative personalities, expecting reliability and a philosophical attitude to their whims from their spouse.

Representatives of both sexes most often come across a woman as a boss, through whom they work off grievances against their mother.

Working out the Moon square – MC The secret of interacting with the aspect is in the ability to listen to intuition, but separate its voice from emotional outbursts and momentary desires.

This is achieved by meditation and prayer practices, solitude by the water. The second step is to live in harmony with others, but not stop being yourself, respecting your desires, but not competing or fighting for them with others.

Resentment against the mother blocks good luck in the profession and makes a woman invisible to the opposite sex, and men are deprived of reciprocity in love.

Forgiveness and acceptance of parents, respect for older women contribute to the development of the Moon-MC square, as well as charitable selfless work or even helping unfamiliar grandmothers.

It is important to get things done without giving up halfway, especially with regard to creativity, psychotherapy, medication.

In a natal chart, the Midheaven (MC) corresponds to the intersection between the meridian and the ecliptic, in simple terms it refers to the specific point that represents the cusp of House X. House X, ruled by Capricorn, corresponds to the areas of public life, social status, ambitions, vocation, professional career, recognition, personal fulfillment and relationship with authority.

Hence the importance of studying the location of the Midheaven, in the natal charts, to offer an orientation on profession and favorable work activities, more in line with the goals of the individual.

The position of the Midheaven is obtained thanks to the time of birth, one of the fundamental information that you must provide when attending an astrological consultation, as well as the exact date and location.

Some astrologers identify the Midheaven with the Consciousness of the Ego, understanding the Ego as the limit between the internal reality and the external experience of each one.

Integrating these two aspects constitutes the true challenge of Midheaven, to achieve personal development, in addition to learning to overcome negative beliefs and limitations, which are present in the X house.

The Midheaven indicates how the subject wants to make his mark or impact the world, how he can achieve success, what the potential he has for it is, and how he creates the public image of him. Remember that the public image is different from the essence of the individual, and largely reflects the society in which he lives or where he built his personality.

The position of the Midheaven is influenced both by the sign it occupies and by the planets found in House X. Sometimes, there are no planets in that location, so a good advice is to examine the planets present in the House. IX.

House IX (goals, philosophy of life, trips abroad) is seen as the driving force behind what happens in House X and the beliefs that develop there. Remember that the twelve astral houses form a system, whose elements maintain a constant interaction with each other.

However, the greater energy of the Midheaven is received from the zodiac sign that governs it. That is why we present below some of its characteristics.

The conjunction of the Moon with the Midheaven makes the destiny and professional life of the person acquire “lunar” characteristics. It especially favors popularity, although if it is afflicted, popularity could be negative.

It often predisposes to a simple destiny although it is often found in many public figures or who live facing the public, and is especially favorable for artists. The destiny of the native will be related to important female figures or will depend on them -the mother, the wife, etc.-. It can also revolve around family and home – a family business.

Finally, it favors works related to food or beverages, even artistic works or works that require sensitivity. An example of the Moon in conjunction with the Midheaven can be found in Salvador Dali’s Natal Chart.

This provision indicates considerable difficulties in a person’s relationship with parents and family. His life is full of frustrations due to chronic dissatisfaction with home life and business affairs. Often, family problems directly harm a career and a good name in society.

It is difficult for a person to understand his unconscious impulses, so inevitably awakened by the behavior of those around him. His own behavior constantly annoys parents, loved ones, and superiors. He always openly expresses his thoughts and feelings, and therefore others try to avoid him, or are very wary of him.

The harmonic aspects of the Moon with the Midheaven encourage the popularity and, in general, the externalization of the best “lunar” qualities. These people will be helped by women to advance, achieve success or assert themselves in professional life.

They are excellent for dealing with the public, and they give the possibility of creating a happy home. An example of the Moon in harmonic aspect with the Midheaven can be found in the Natal Chart of the actor Antonio Banderas.

Dissonant aspects will not cancel out good qualities, although they tend to manifest the more negative side of the Moon. They give popularity but this can be negative, as well as a risk of scandals.

It can also cause instability or ups and downs in professional and family life.

Women can have a negative influence on a person’s life. Also at times, it can incline to a vulgar or mediocre fate. An example that I can put is that of the singer Ramoncín.

Despite his strong attachment to home and family, he may well turn his back on them when it comes to his own professional success and the reliability of his position in life.

Popularity is not easy for such people, and often they become infamous in connection with any negative events or incidents.

Dissatisfaction with milk and work. Their behavior irritates the bosses, parents, family.

It is difficult for a person to understand his subconscious, which is in charge of the Moon.

Apparently, domestic problems stand in the way of professional ambitions.

This leads to dissatisfaction, which only exacerbates the original problems.

The source of trouble is not somewhere outside. It lies somewhere in your subconscious patterns of behavior; that’s what other people respond to. (Moon squared with Midheaven).