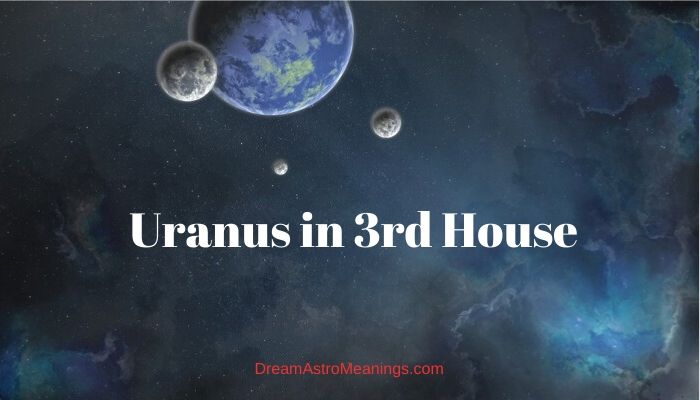 Uranus is the first of transcendental planets in astrological readings. Being very far and slow, from our, Earthlings’, point of view, Uranus is often taken as a planet that does not have much influence over an individual’s life.

However, if it creates specific and strong aspects, its influence will manifest more directly. Uranus is the planet of rebellion, of sudden change, of innovation and ingeniousness.

This planet is considered a patron of all those people with brilliant minds; those who will be remembered for their radical ingenious inventions and ideas. Uranus shakes, shocks and impresses.

Many would say this planet stands on the edge of future, living in this moment, here and now, thinking of it from an astrological point of view and a natal chart report.

Uranus represents a daring spirit, a rebel with a cause, one that would stand out and boldly express their fantastic ideas about the world.

All radical movements and activities are associated with the effect of the planet Uranus. Uranus is to break old habits and order and to introduce radically new ideas.

In Greek mythology, Uranus was a sky god, the forts to rule the world and establish new order, after the initial Chaos.

Each astrological house is related to experience of the native in their real, earthly life. These are twelve fields you could see in a natal chart. Astrological houses tell about how one would function in the particular area of life.

Each astrological house is analogical to one of the twelve zodiac signs. Houses could be angular, succedent and cadent. Each group presents with specific quality.

Angular are houses associated with cardinal signs, those of Cancer, Aries, Capricorn and Libra. They signify activity, present moment and yourself in it. Succedent houses are associated with fixed signs of Scorpio, Leo, Taurus and Aquarius.

These are related to available resources in life. Cadent houses are ruled by mutable signs of Pisces, Virgo, Sagittarius and Gemini. They are about what comes before taking action.

Houses are also divided into Fire, Earth, Air and Water houses. Fire houses are about identity and one’s attitude towards life.

Water houses are about emotions and matters of the soul. The Third House belongs to Cadent and Air houses.

The Third Hose is one of cadent houses, associated with mutable quality, ruled by mutable signs of Virgo, Gemini, Sagittarius and Pisces.

These houses are greatly associated with sub consciousness and thoughts that precede our actions, many astrologers would agree.

The Third House, as one of these, represents our perception and our communication skills. It has much to do with relationships with our siblings.

This astrological house is also about learning and about short-term travel. The Third House is also one of the Air houses, which are primarily associated with social relations and with one’s intellectual abilities and potentials of the mind.

These air houses have much to do with concepts we form and share with other people sharing concepts through communication is something that could be seen in the Third House.

Air Houses are associated with someone’s interests and the way of verbally expressing their ideas, thoughts and concepts.

Planetary distribution within the Third House tells about how the individual understand and experiences self through exchanging concepts with other people.

The Third House is greatly about knowing yourself through social relations. This house affects the intellectual self of an individual.

The Third House in a natal chart represents the closest family and siblings, in the first place.

This house greatly explains relationships within the closest family, but it also affects wider circles of interactions. It includes relationships with people in one’s environment, such as neighbors, colleagues, people you generally meet in your life on a regular basis.

This astrological house has much to do with intellectual capacities and skills, so it could tells us much about someone’s education. This field tells about one’s potentials regarding education and learning.

It also tells about the way one is going to fit into the working environment, their working abilities, capacities, skills and else. The Third House is about practical skills and job.

The Third House reveals much about one’s intellectual and social abilities. If powerful planets, such as Mars or the Sun, happen to be in one’s Third House, the individual is very likely to be brave, courageous, adventurous and ready to learn and explore the world.

These planets could suggest frequent movement and travel. Today, we will not be talking about Mars or the Sun, but about Uranus in the Third House.

Uranus in the Third House indicates a temperamental personalities and individuals who would boldly defend their opinions and convictions.

These people see through things clearly and they would never give up their visions easily.

Moreover, they are visionary; Third House Uranus people are creators, inventors, initiators of some new ways of thinking, observing, but also acting in the world.

They bring on fantastic, ingenious ideas many would find awkward and out of place. Nevertheless, a Third House Uranus would stand for their ideas.

These people find learning and education of essential importance in life. They could reach very high places and outstanding positions within the society, if their Uranus was in favorable aspects in a natal chart.

Uranus is about visions, change and revolutionary solutions, these people combine the two. They are greatly interested into innovative ways of connecting people. In our modern environment, they would be oriented towards internet communications.

This field of interest represents an amazing ground for them to express their ingenious creativity. They are capable of offering something new and original to the world; something unique and often regarded as a step ahead this time.

However, things could go the other way around, if Uranus was in bad aspects.

Uranus in the Third House – Ingenious, but Reckless

If that was the case, these eccentric and freethinking individuals could become reckless and unreliable concerning very important things in life.

They are temperamental and impulsive, so they would often make decisions on a whim, without thinking about any consequences, which could be bad.

If their Uranus was in bad aspects, these people become notorious for changing their opinions too quickly and irrationally.

Third House Uranus people are eccentric, crazy in eyes of many. Their ideas could appear very odd and bizarre to other people.

They always seek for the most unusual and the least threaded path to something. They love to explore and experiment, which is overall a good thing, but they could really lack tolerance and any sense of responsibility while doing their thing.

A Third House Uranus person is extremely active in one moment, but then ridiculously passive in another.

Others have no idea what to do with that and how to approach such a person, how to understand him or her.

Many would say that such an individual is out of this world, too strange and too eccentric.

However, no one could deny brilliant mind of a Third House Uranus person.

These people often come up with fantastic, radical and revolutionary solutions to things. Their solutions and inventions are typically unconventional, so they would often face lack of understanding from the other side.

The instability of their attitudes and behaviors make people suspicious and cautious around them.

Especially if Uranus was in challenging aspect, this personality does not leave an impression of a trustworthy person, regardless of all the wisdom, intellectual capacities, brilliance of the mind and openness he or she presents with. They are too unsteady.

Uranus in the 3rd House – Transit

Uranus in transit through the Third House is associated with development of ideas, with separation from family and it is not a good period to travel.

This transit indicates the need to change your attitude towards financial matters, finding some new ways of gaining material resources.

This transit suggests you should consolidate faith into your own talents and capacities. Think about changing your attitude.

All of your bad habits would reflect in your relationships with the people in your environment. The problem emerges out of your desire to dominate others, to put yourself above the rest.

You have to realize that sometimes it is important and useful to adapt to the environment. Yes, Uranus is a rebellious planet, so this is not an easy thing to do.

However, adaptation could be beneficial; you could learn much from it. By adapting to the environment and the people around you, you will gain more self-confidence and the sense of stability, which would lead you to new opportunities.

You need this sort of adaptation, in order to face new circumstances in your life. It is very likely that you would behave unusually and untypically, because of all such changes.

Others will be astonished by your brilliant and original ideas, which is a direct impact of Uranus in the Third House transit. Your intuition will be stronger and sharper and you could even have some kind of near-psychic experience.

However, these are going to be turbulent times, especially in the area of family relationships. Some relations will be disrupted.

This is not a favorable period regarding family relations. This is also a bad period for travel and transport, so be very cautious about it.

The influence of Uranus will slowly reach the Fourth House, so you should think about preparing yourself for changes concerning family and household.

Your security will be shaken, overall. Be ready for changes.