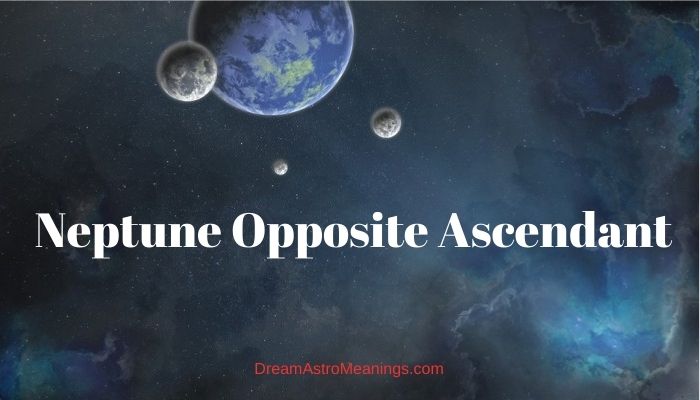 We are going to talk about another planet among the slowest in the zodiac. Neptune moves slowly compared to other planets like Jupiter and Saturn that can stay for years and years in a zodiac sign.

From this follows the fact that it is a so-called generational planet together also with Pluto and partly with Uranus.

This means that his steps affect more generations than the individual who undergoes his transits in astrological signs and houses.

But what meanings does Neptune bring during its transit? We will see all the transits of Neptune in your natal chart in conjunction, sextile, trine, square, opposition with the other fast and slow planets.

You can read the meaning of the conjunction, sextile, trine, square, opposition transits of Neptune with these planets by clicking on the following links. Choose transit you want and enjoy reading.

The conjunction will make the personality and external image of the native acquire a markedly “Neptunian” tinge. It significantly increases sensitivity and magnetism, as well as psychic and intuitive abilities. Often these people seem to live or be in another world.

The unconscious is very powerful in them, and sometimes they have paranormal gifts or the ability to act as mediums. It is a conjunction that exalts fantasy but makes it difficult to insert into the real world.

Physically, these people have a dreamy look and a sensitive or spiritual aspect, as well as an aptitude for art and also for spirituality. Example: the natal chart of San Vicente Ferrer.

The harmonic aspects develop the same “Neptunian” influence on the personality, but emphasizing its more positive side and softening its negative traits. They endow the native with a deep sensitivity, a romantic and idealistic character and a fruitful imagination, intuition and inspiration, at the same time that they favor goodness, humanity, altruism and a sincere concern for their fellow men.

They also provide excellent artistic or spiritual skills and promote harmony in marriage and unions. As an example I return to the letter of the philosopher Jiddy Krisnamurti.

Dissonant aspects do not override Neptune’s values, but they can accentuate its dark sides a bit more. They can make the native very passive, vulnerable and defenseless, and also not very responsible, faithful or trustworthy.

He is in danger of fooling himself or being fooled, as he tends to be gullible, candid and kind, so he too can be the victim of unscrupulous people.

Physically it increases the possibility of dependence on drugs or alcohol, as well as the risk of poisoning or intoxication.

These natives may also have hidden enemies that attack from behind. Here I can give as an example the letter of the occultist Aleister Crowley.

Neptune has to do with Non-duality, —something not easy for psychology to understand. And with dreams, with imagination, with falling in love, with fascination, with the surreal, with deception …

And it is also related to the esoteric, to silence, to the spiritual, to the invisible but that exists, etc. In Neptune in the Ascendant or House 1 we also saw other qualities of this planet. Also on Mars in Pisces.

As a transpersonal planet, it is not easy for the psyche to coexist with it. If the human psyche wants security and Neptune dissolves the structures, it is easy to imagine that the Neptunian person has to create a parallel world, or a refuge where they can feel that magical world that they carry inside (imaginative travel while listening to music …)

For example, Venus conjunction Neptune is the person who dreams of a love, he loves to feel the love vibration, he can easily fall in love, so he can risk seeing in the other what he really is not … until he learns.

But at the same time, in that Venus resides the greatest possible love potential, capable of surrendering without expecting anything in return.

People with several planets in Pisces or in the 12th House will have similar experiences. Dreams, desires, intuitions, indescribable sensations … Is what I feel and live real?

Tell us, in which astrological house do you have Neptune? What aspects does it have? And above all, how do you live this special energy? In the comments we can discuss some more specific aspects or configurations.

Contrasts between what you want to achieve and the ways to achieve it. Will to power, at the same time longing to achieve it by strange, distant or mysterious ways.

The dream and the subconscious are united in the same purpose, but there is a lack of constant effort in the same direction, more constructive or productive in economic terms, because work or effort is despised. Mental and sometimes physical wandering.

Vices and escapisms of all kinds. Metabolic and pandemic diseases. Sensitivity or allergies to medications. Drug dependency. Cysts and fibroids. Homelessness, or extreme wealth, mental power that only serves the show.

Depth of feelings that contrasts an artificial mindset. Superstitious belief system. Various allergies, especially to medications, use and abuse of the consumption of drugs, alcohol and psychotropic, chronic diseases for the nervous system that contrasts great capacity for cell regeneration. Longevity. Possibility of suffocation.

Contrasts between what you want to achieve and the ways to achieve it. Will to power, at the same time longing to achieve it by strange, distant or mysterious ways.

The dream and the subconscious are united in the same purpose, but there is a lack of constant effort in the same direction, more constructive or productive in economic terms, because work or effort is despised.

Mental and sometimes physical wandering. Vices and escapisms of all kinds. Metabolic and pandemic diseases. Sensitivity or allergies to medications. Drug dependency. Cysts and fibroids. Homelessness, or extreme wealth, mental power that only serves the show.

Depth of feelings that contrasts an artificial mindset. Superstitious belief system. Various allergies, especially to medications, use and abuse of the consumption of drugs, alcohol and psychotropic, chronic diseases for the nervous system that contrasts great capacity for cell regeneration. Longevity.

Rich imagination, artistic temperament, inclination to mysticism, very vivid dreams, or premonitory, dreamy or psychic depressions. It shows that you are very sensitive, and perhaps psychic.

The perception of the real world is deformed or molded to fit with what the native wishes to see, unless he is a prophet, then he will see, or hear, what will be or is, beyond the immediate physical reality. Work of arts, music and dance form a world of their own in which the native plunges when life gets heavy.

The injustices of life can cause you real and physical ills. Because the environment has such a powerful effect on you, you should make some contribution to improving people’s lives, to soothe your own anxieties when they arise.

When people fail you, you always tend to give them the benefit of the doubt, and quietly shut up your disappointment. He is often heartbroken over things he has no control over, and his feelings of guilt and failure can lead him to a world in which he is “safe from responsibility.”

If the effect of an event is abrasive enough, you can resort to artificial elements to induce relief from painful realities. You attract strange and strong-willed people who may gain control over you, or make you feel vulnerable. It must be associated with people who have their feet on the ground.

To compensate for its sometimes diffuse or vague nature. You need stability in reality, where you can do a lot of good. There is a great need for understanding and good people in the world, and your social sensitivity takes away the right to reject people who come to you for help.

He says he has the ability to build the kind of world he wants to live in, from the resources he has at his disposal. It understands how difficult it is to function efficiently under pressure from economic or environmental conditions that frustrate every lap.

But it is in their hands to do something so that the official authorities surrender to the demands of the people. It can play an important role in discussions about public affairs to eliminate parasites that cause deteriorating conditions in society and the environment, and about the depraving human qualities that they produce.

He speaks and conducts himself with authority, no one will call him a “troublemaker” and critical. Usually he will not take any action, unless the situation is serious.

If it is, it will use all the tricks it has up its sleeve to expose those responsible for taking the necessary actions to bring order out of chaos. You won’t be satisfied until you see that the system is working efficiently. He does not tolerate abuse in his personal affairs, he knows what he wants out of life, and he is prepared to make any kind of investment of talents and efforts to achieve it.

Unfailingly defends all those in your care and the people you love, you know that you will protect your interests at any cost. You must be careful not to overindulge with yourself and with others.

Choose your adversaries carefully, or you could antagonize someone who will have no qualms about using violence to get out of you. He has the ability to bring out the best in human beings, but also the worst in them. Your enemies will be powerful.

The meaning of the planet Neptune in Astrology is quite complex since we enter the realms of the unconscious.

Neptune has the function of permeabilizing and sensibly opening everything it touches.

Through Neptune we connect with what exceeds our physical or mental structure (Saturn). They are the mediums, seers, perceivers, etc.

Neptune is love, insofar as it does not think in terms of me (the I does not exist!) Since there is no difference between the I and the you. That distance disappears. There is only one “We”. With Neptune we feel united with Nature, we identify what the other person feels, and we merge with everything living.