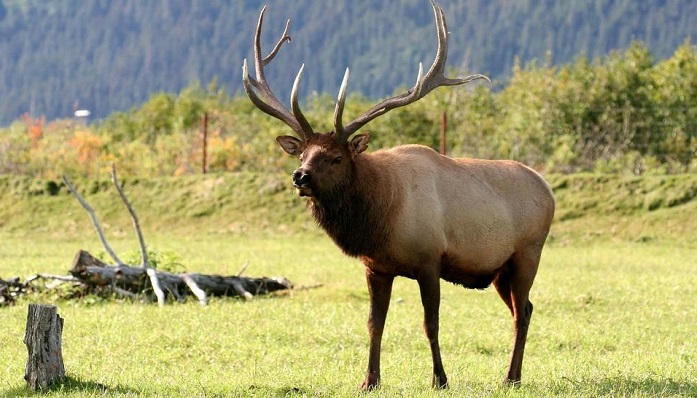 There are numerous amazing animals on our planet and many of them mean a lot more to us, then simply being helpful and useful. Certain animals have incredible cultural and spiritual significance to people.

One of such spiritually interesting and biologically amazing animal is moose.

Moose is the biggest exemplar among deer. Moose are very large mammals, with impressively big antlers, long legs and specific overall appearance. They live in North America and in Canada.

Moose are quiet, antlered giants, heavy, physically strong and tough animals. They evolved to survive harsh cold climates of areas they inhabit. Moose and their closest relatives, elks, are well adapted to climates of Canada, Alaska and New England, as well as Russia parts, Baltic lands area and Scandinavian countries.

The major difference between moose and their deer relatives is that the former are solitary animals, unlike other deer that prefer groups and herds.

These massive Cervidae family members are not threatening or dangerous to humans; they are rather calm, quiet and slow, than aggressive. However, they do appear intimidating to us, because they are very big and they have distinctive features, such as their wide and large antlers, big noses and their height.

Of course, it is strongly advised not to provoke them, because if you irritate such a big animal, you will definitely get hurt.

Unfortunately, regardless of their physical toughness and strength, moose are animals with decreasing population, due to various factors. People still hunt moose and wolves and other predators attack them, even if they are so big.

Moose are also fragile in other terms; their massive bodies do not protect them from severe and life threatening bacterial issues. The bright side are northern and cooler parts of the world, where moose still keep their numbers, because not many other living creatures come to these freezing lands.

Moose are an ancient species and they have been living in northern hemisphere for long. In traditions of people who share their habitat with these impressive mammals, moose play an important symbolical role.

Both moose and elks are featured in folktales, myths and legends of peoples from areas they inhabit as well.

There are various Indian beliefs about moose and numerous stories about elks, mostly in Uralic cultures and traditions. 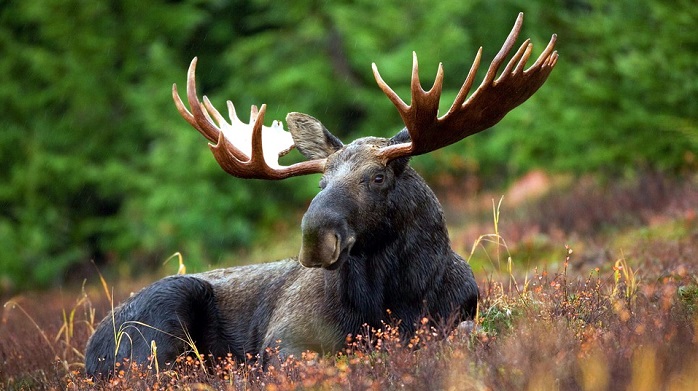 Let us first get to know this incredible animal, before we continue to interpretation of its symbolism. Moose are exceptional in deer family and among all other animals, of course.

Their appearance is definitely eye-catching. Moose live in sub-Arctic environment and they are impressively resistant to cold. There are several types of the species, but they all share same characteristics.

Moose symbolism and cultural significance is the strongest in parts of North America. They could be found in Canada, Alaska and other northern parts of the continent. People do not think of moose as a threat and danger, because these animals are slow, calm and quiet most of the time.

They even appear clumsy, roaming around, carrying their massive bodies on these long legs. It is not unusual to meet one of these animals on North America roads.

A moose could appear scary and intimidating to you, but it is very unlikely to do you any harm. Most probably, you will only have to wait for the animal to slowly cross the road and continue your way.

Moose are not afraid of people, but they do not seek for any interaction.

They are particularly unlikely to attack humans, but you do not want to irritate them, especially if they have little ones with them. Moose are caring and protective parents and you should not mess with them.

As we have mentioned, moose are the largest of all deer. Males are somewhat larger and higher compared to females and they could reach up to six feet in height. Their antlers are incredibly large, as well; other deer do not have antlers of that size, except for elks.

In nature, moose are rarely threatened by other animals, although there are predators that could harm them, such as daring bears and wolves. Just as in many other cases, it is perhaps that humans are their worst enemy.

Moose feed exclusively on herbs and they are physically fitted to roam over vast areas in search for good, nutritious grassy and leafy food. Having in mind northern hemisphere is cold and not as rich in plant life as some other parts of the world, you could imagine moose have to spend a great deal of their time in searching for good food sources.

They can endure long journeys and they, surprisingly, are excellent swimmers.

Just as we have mentioned, moose are probably culturally the most important to peoples living in the same areas. Particularly, there are moose legends and stories among Seneca Indians.

There is Seneca legend about The Moose Woman, Abenaki tribal legend about how did the Moose got its crooked nose, the story of the Catfish and the Moose from Menominee people and others. We will share with you the interesting Abenaki story that explains moose specific looks.

According to this legend, a powerful hero of Abenaki mythology, the figure named Gluskabe, who was particularly interested in well-being of human beings had to make certain regulations in order o protect humankind from dangerous animals.

He was afraid that some animals could harm humans, so he called upon them and make some magical changes.

When he called up the Moose and asked what it would do if meet a human, the Moose said it would hurt them.

Gluskabe was not pleased with the answer, so he magically softened moose’s attitude towards humans; that is why these animals are so calm and peaceful nowadays. While doing so, he also bent the Moose’s nose and that is why this large, tranquil giant has such an interesting facial feature, which even makes it look even more docile and calm.

Their crooked noses made moose gentle and peaceful giants that would never harm a human being without being attacked or threatened in the first place.

Moose symbolism is interesting and inspiring. From native beliefs and all information we have about natural characteristics of moose, it is easy to assume moose symbolism is, for a great deal, positive.

Rarely are moose seen as a negative symbol; people who live in lands moose inhabit have great respect and admiration for these animals. Moose are not so widely present around the planet, so their symbolism restricted to folktales and beliefs of indigenous peoples to the northern hemisphere areas where moose live.

However, the symbolism is universally accepted.

They appear scary and intimidating, so other animals would rarely dare to attack or provoke them.

Moose roam over vas spaces of land, in search for food or so and they are not afraid of other living creatures. They symbolize self-confidence, power, dominance and masculine power, in the first place. Their distinctive looks mark the symbolism.

While moose are animals of a calm nature in general, males do fight among themselves over females, during the mating season. They usually beat the opponent simply by showing off; the smaller, physically weaker one would often step back and let the other get the female.

In addition, females are also strong and they symbolize motherhood, protection and feminine power. They are caring and loving mothers and they would do anything to make their cubs safe.

Moose symbolize guardianship, care and protection. These animals show great affection towards their little ones, which is a trait we people appreciate very much. People see moose as a powerful symbol of such values.

These large mammals also represent adaptation, endurance, stamina and patience. As we have learned, they are tough and they could spend a lot of time roaming wasteland in search for fertile ground with tasty, nutritious plants they feed on.

They adapt to harsh climates and are not easily bothered by weather changes. They are ancient, enduring and surviving. Moose embody the idea of patience and hard work, both needed for success and achievement.

Moose do not appear especially elegant or graceful, in the first place. However, these animals are agile in waters and they walk steadily, calmly and without any rush when on ground.

If you observe them moving for an extended period, you would notice they move similarly to horses and that they appear so serene and proud, almost royal. That is why moose also represent gracefulness, royalty and pride.

In addition, their intimidating looks do not make them harsh and tempered creatures. In fact, moose are tender and gentle.

They show affection amongst themselves, especially when it comes to mother and child bonds and they would never intentionally harm other living creatures. They are peaceful towards the nature and they represent natural balance, peace and harmony.

Native Americans appreciate and admire Moose totem very much. This totem animal is an amazing spiritual guardian and guide. It offers amazing gifts, in terms of personal values, positive traits and encouragement for personal development.

Moose totem makes one at peace with the world and with themselves. People guided by this totem are individuals to look up to. They are calm and balanced, very understanding and compassionate.

Moose people are generally calm, peaceful and not easily troubled. They have great understanding for others and for things happening in this world. They are open to new knowledge and new experience, but they rarely risk or make thoughtless decisions.

These people are steady and they generally prefer routine. They do not seek for much excitement in terms of extremes.

Moose personalities are modest and caring. They value all things in this world and know how to make balance in life. Their approach is calm and polite; they would never harm others by neither their deeds nor their words.

They always think things through, before acting. They are also very self-confident, but never too proud of themselves. They are not narcissistic and vain and they always keep an ear open for others’ stories, comments, ideas and advices.

At the same time, moose are compassionate and caring. They do not find it hard to offer their support and to help others. They are loyal friends, caring parents and supportive and loving partners.

Other people see great support in them; they are some of the most reliable people in the world.

However, Moose people would never let others lower their spirits, discourage them or manipulate their actions. They are self-aware and strong willed. They always keep their head cool and their mind clear in stressful situations.

They have a lot of experience in life, only they build it gradually. In everything they do, their pace is well calculated, balanced and slow, which is good. They do not like a lot of noise and turbulence in life and they are extremely unlikely to bring the drama on.

They usually act the role of mediators in arguments; they cool things down and relax tensions.

They could be amazing diplomats, educators and social workers.