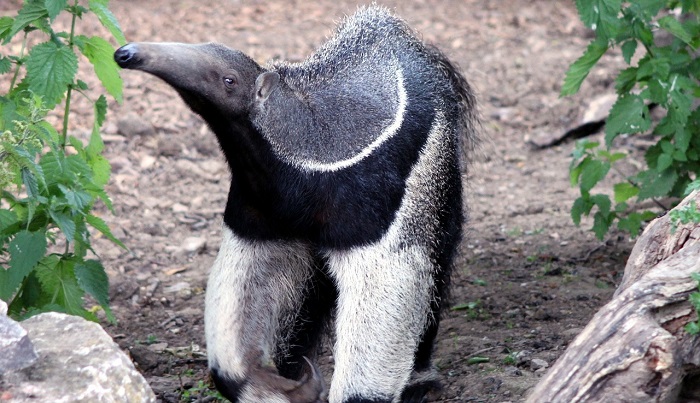 Anteaters are mammals known for eating termites and ants. They are related to the sloths and armadillos.

There are four existing species of anteaters: the giant anteater, the silky anteater, the northern and the southern tamandua anteater.

They have strong digging forearms, long tongues, long tube-like snouts they use to raid termite mounds. The snout has a thin tongue which is longer than the length of the anteaters head.

They have lips without teeth. They have large curved claws which they use to open termite and ant mounds. They also use them for defense if there’s need.

Their long dense fur is perfect protection from insects’ bites. They usually have long tails.

Anteaters are usually solitary. They are also territorial animals. Their territory ranges up to 3km2. They avoid entering the territory of an anteater of the same sex. Males regularly enter the territory of females. They fight over territory and sometimes even jump on their opponents back.

Males are somewhat larger than the females, with wider necks and heads.

Their diet consists of small insects. They lick large amounts of ants and termites in a short while to avoid stinging and bites during the process. The tongue moves very quickly. Their stomachs are adapted to digesting insects such as ants and termites.

Anteaters prefer habitats like rainforests, dry tropical forests, savannas and grasslands. Some species are entirely terrestrial, and some feed on the ground and in trees.

The coloration of the anteater enables it to blend in the surroundings. Anteaters move slowly. Their sharp claws can be a dangerous weapon when needed. They can attack back and even kill the attacker. They use the claws for climbing trees as well.

When attacked, anteaters rear up on their hind legs and hug the attacker digging their sharp claws into the attacker’s back and usually breaking it. 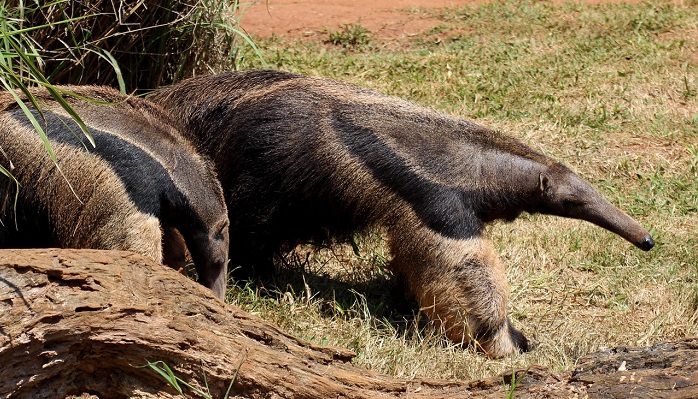 What does an Anteater Symbolize?

The anteater has many symbolic meanings.

The Anteater Meaning as a Spirit Animal

The anteater totem can have many different meanings. Here are some of them:

Solitaire. Anteaters are solitary creatures. If you have an anteater as your totem, you are must likely a loner too. You enjoy spending time on your own, minding your own business. You mingle with other people only when necessary.

Defensiveness. Anteaters are defensive, and they don’t hesitate to use their sharp claws to defend themselves and their territory and even killing the intruder. You share this trait with your totem animal and you tend to defend what is yours. Sometimes you can be overly defensive, without a real reason, and the anteater totem can help you overcome that habit.

Territory and protectiveness. Anteaters are territorial and protective. As totem animals, they teach us to protect our privacy and don’t allow others to invade it without invitation.

The Anteater as Your Totem Animal

Having an anteater as your totem animal makes you sensitive and emotional. You are also intuitive and able to sense things, especially approaching danger. That ability helps you protect yourself and your loved ones from possible harm.

You tend to be a loner by nature and you are very independent. You are courageous and aren’t afraid to defend yourself and the things that belong to you.

You are protective of your private space and can sometimes be harsh and ruthless in defending it. You don’t hesitate to hurt someone who tries to harm you in some way.

People who have an anteater as their totem animal usually don’t have good eyesight, but they compensate that with some other special gifts they possess.

You can be lazy and tend to procrastinate at times, but you know what your duties are and you do them in time.

What if an Anteater Appears in Your Life?

When the anteater appears in your life, it could indicate something is bothering you. Maybe you have some current issues you don’t know how to resolve.

The anteater often symbolizes something you have, and you don’t know what to do with.

The anteater can be a reminder to become more open to other people.

Maybe you have become overly isolated from others, and the anteater is asking you to become a part of society again.

It is alright to have your private space and be protective of it, but if that defensiveness turns into a situation where you don’t see other people for days, even months, the anteater appears to remind you that you need to have some human companionship for your own good.

The anteater sometimes reminds you to find some time to devote it to yourself.

Maybe you have been overwhelmed with many things going on in your life, and you feel that taking a break from everything and everyone would be the best thing for you right now.

When to call on an Anteater?

You should call on anteater as your spirit animal when:

Dreams about an Anteater – Interpretation and Meaning

Often a dream about an anteater reflects your reality, which is full of anxiety and stress because of many duties and tasks you need to perform.

Maybe you have been stuck in some difficult situation for some time and you don’t know how to get out.

An anteater eating ants in your dream is a very good sign, indicating prosperity in the future.

Sometimes it is a sign of new love coming into your life.