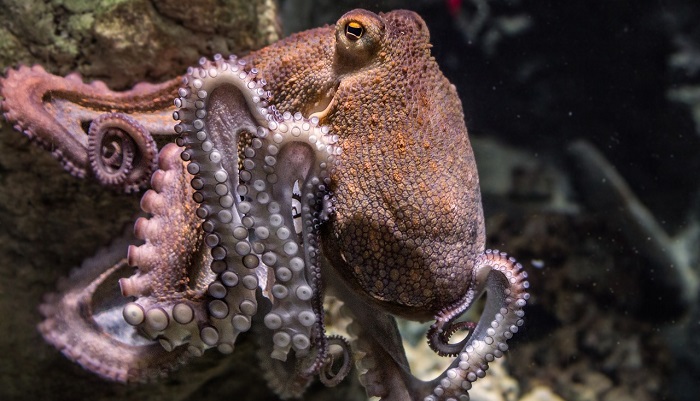 Octopus is definitely one of the strangest and the most fascinating creatures that walks or, better to say, swims this planet. This oddly looking animal features amazing biological traits, which makes it equally interesting in symbolical sense.

As a spirit animal, octopus is loaded with symbolism and veiled by mystery. Octopuses are part of various traditions and they are featured in almost all of marine cultural concepts.

All societies living near coastal areas or very close to sea have their legends and stories about octopuses.

Since these animals appear so different from us, people have invented numerous mysterious and mystical beliefs about them, before they knew anything about their natural characteristics, in terms of science of biology.

Octopus and its eight tentacles are considered magical beings in various marine and coastal traditions. They are featured in folklore, mythology and art of these peoples.

Before we analyze symbolism of octopuses and their totemic powers, let us find out something more about this fascinating creature.

There are many interesting biological facts that make octopuses so amazing spirit animals and actually give it its magical powers. These oddly looking mollusks are intelligent and extremely adaptable creatures.

They are masters of visual illusions, surrounding themselves with a cloud of black ink, when they are threatened.

This is only one example of octopuses’ natural characteristics that make this animal so interesting, intriguing and mysterious to humans. There are many more.

Before we move on, we would like to mention that octopuses come in many sizes and shapes and they all inhabit deep seas and oceans.

They could be true sea monsters you read about in fantasy novels; there are octopuses that range about forty meters of length.

There are also little, less frightening ones that could perfectly fit into a human’s hand. 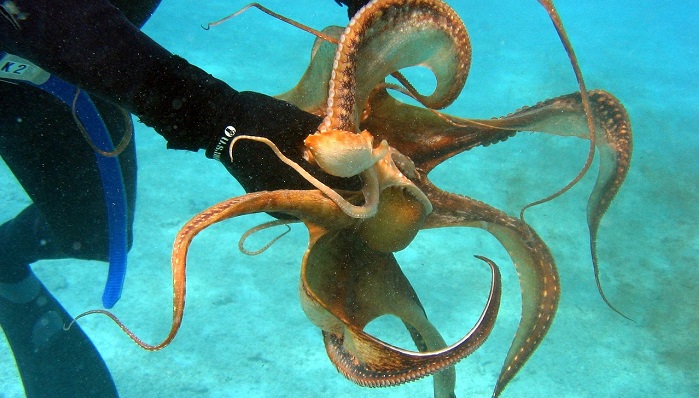 Octopuses are very intelligent species, very much similar to humans, in a way. Yes, exactly so; these ‘alien’ mollusks actually share several important characteristics with humans. They could communicate through mimics and gestures.

Octopuses are masters of imitating other creatures and they are capable of solving complex tasks that involve thinking, such as escaping mazes, solving puzzles, opening bottles and so on.

They are very flexible and skillful in using their tentacles and their bodies in general. They could blend into their surroundings so perfectly that they literally disappear in front of other living beings’ eyes!

Octopuses could lose complicated nodes and release padlocks. Some of them are so intelligent that they could even resolve famous Rubik’s cube, which is quite challenging for most of us intelligent humans.

Octopuses are neat and organized animals and perfectly adaptable. They make their homes comfortable and tidy.

These incredible mollusks are not that benevolent; although they look calm and relaxed most of the time, they are known to attack other animals, even larger and more carnivorous predators. Octopuses could even attack bloodthirsty sharks and poisonous medusas.

Octopus symbolism is present in all marine cultures and various traditions throughout our history. Octopus motifs are to be found in ancient murals, pottery and other artworks. They are present in mythology, folklore and literature of many societies.

Octopuses have always been fascinating people from all parts of the world; there are legends about giant eight-tentacle monsters that dwell in deep oceans and swallowing whole ships.

During the Victorian Age of sail, stories of giant octopuses were common amongst sailors. In Julies Verne’s Twenty Thousand Leagues under the Sea, one of the most popular adventure fantasy book ever, there is also a legend about a giant, dreadful octopus.

Number eight is a spice to octopuses’ overall symbolism. This number has always been associated with spiritual powers, some higher, inexplicable force, and hidden powers.

These fascinating mollusks symbolize flexibility, adaptability, vitality and strength. They are masters of swimming and passing through narrow spaces between stones that would be a great challenge for the most flexible and agile cat.

Their bodies do not have bones and they move without any trouble, wherever they like to.

That makes it easy for octopuses to escape all predators. Symbolically, they also represent avoidance, escaping and tactfulness. Octopuses also represent longevity, power and vitality.

In some countries, they are a part of diet and there have been many controversies considering the subject of eating octopuses.

In some Asian countries, these animals are sometimes eaten alive; it is believed this practice could make you extremely strong, healthy and vital. Octopus meat is believed to have incredible nutritious properties, with mystical energy powers, as well. It is eaten in other parts of the world, with similar ideas.

Finally, octopus is associated with incredible cleverness and intelligence. As we have mentioned, science proves these animals are capable of doing complex and challenging brainy tasks.

Its eight tentacles are associated with manipulation and control, in either a bad or a good way.

Octopus totem is a rare and amazing one. This spirit animal is a guide you could only wish for, so, being born under the totem of Octopus is a true gift.

This totem teaches you how to use all your skills the best way you can, in order to achieve your goals. Octopus totem teaches patience, steadiness, tactics and thinking are vital for accomplishing goals you have set for yourself.

At the same time, you could use your courage and strength to endure tough times. Octopus people are a bit dark, but not in particularly negative way. They are mysterious and not as open as others are.

However, they are not shy and of low self esteem.

They are only very careful and observant; an Octopus person would never open up to a stranger that easily. They like to evaluate situation first and they are not prone to take risks.

Octopus people have good sense of their surroundings and they easily fit into their environment.

They are not particularly sociable, but they never get lost in masses; they are eccentric and easily recognizable. Octopus people are usually deeply imaginative and creative. They like doing things on their own and they would rarely ask for any assistance or help.

They are not extremely compassionate, either, but they would also not refuse to help if asked.

Of course, they are not to be exploited and manipulated; it is more likely they could manipulate others. In general, these people are very flexible and undemanding, in terms of materiality.

They are clever and creative mind helps them feel comfortable in various conditions.

We have said they are not particularly compassionate, but Octopus personalities could get very attached to a small number of people.

They are loyal, kind and caring towards their family, lovers and good friends. They keep their company small, but maintain such relationships for life. Octopus people are extremely intelligent and good with words.

They have sophisticated sense for describing the world, which makes them unique and intriguing to others.

You could learn many interesting things from them, because they love to explore the world through both experience and theory.

However, you will definitely need some time to make them let you into the world they have created for themselves.