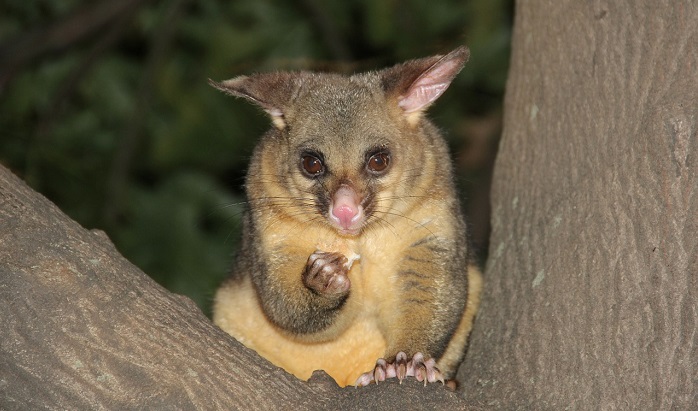 Opossums or possums (as they are often called in North America) are small marsupials native to the Americas. Their origins are in South America and after they spread across North America too. They are very adaptable and flexible animals, which makes them able to survive in different habitats and different living conditions.

These cute little creatures look like a combination of chinchilla and a squirrel.

These animals have two wombs, like other marsupials. They are usually omnivores adapted to eat the food available in their habitat. They have strong memory, especially when it comes to remembering places where food can be found.

Like other marsupials, female opossums have a pouch where the babies continue to develop after birth. Baby possums are called joeys. Females give birth to many young, but only those who find their way to the pouch survive. The young leave the pouch between two and a half months and four months.

The male opossums are a bit larger than females, but much heavier with larger canine teeth.

These animals are usually nomadic and solitary creatures. They stay in an area as much time as there is food and water. Some family groups of opossums join and live in burrows or under houses. They occupy abandoned burrows rather than building their own. They don’t want to put in much effort.

Possums are nocturnal animals, and they love to secure and dark areas to hide.

These creatures have a habit of playing dead when they are threatened. That is called “playing possum”. The animal mimics the smell and appearance of a dead or sick animal to scare away potential attackers. It is considered that this behavior is not a conscious act, but rather an instinctive reaction of the opossum.

While in that state, they can even be moved and carried away without causing any reaction of the animal. The opossum gains consciousness after some time, which can last from minutes to several hours.

Their tails are sometimes used as a fifth limb to help them climbing or carrying something, like leaves or bunches. Mothers sometimes carry their young on their backs. 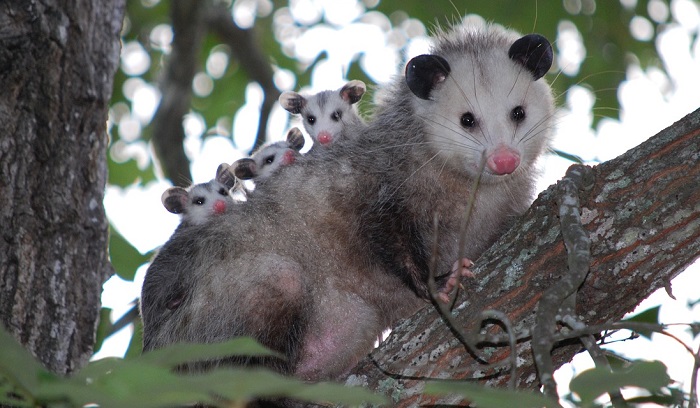 When they are threatened, opossums tend to produce deep growling. They have different vocalizations to express their emotional state or convey messages to each other.

The babies and mothers have special sounds to recognize one another. The babies hiss when threatened.

These animals are special for being immune to snake venom of almost all snakes from their vicinity. They use that as an advantage and often feed on snake they come across.

They also rarely catch rabies, due to their lower body temperature which makes them unsuitable host for the virus to develop. They are very clean animals, and frequently groom themselves using their paws and tongue.

Opossums are traditionally hunted and eaten. Their grease is used as a remedy for arthritis.

What does an Opossum or Possum Symbolize?

The opossum or possum is a small animal but have some impressive characteristics, which make it a powerful spirit animal with some important symbolism.

The Opossum or Possum Meaning as a Spirit Animal

The opossum or possum totem can have many different meanings. Here are some of them:

With the possum as your totem, you must be a resourceful person already, instinctively knowing how to make the most of any situation.

Nurturing and caring. Opossums are marsupials and they continue nurturing their babies in their pouches after they are born. They are caring and nurturing animals, and they transfer that gift onto you as well.

You are usually a caring and protective parent, but you are not only protective and caring towards your dearest; you tend to demonstrate these traits towards all people.

You can have these traits also if the opossum is your totem animal.

Sometimes this totem reminds you not to misuse your abilities of pretending and deceiving others to gain some benefits.

Nomads. Possums are true nomads. They don’t stay long in one place if the conditions are not suitable enough. They seldom make their own dens, but tend to use abandoned ones, until it’s time to move again. Just like your totem, you have a nomadic and adventurous nature.

You have problems settling into one place exclusively. You rather move from place to place or from country to country, finding the one which fulfills your current needs the most.

Although this kind of lifestyle can be fulfilling and satisfying for some time, in some moment it can get overwhelming, especially for the ones you share your life with.

Sometimes the possum appears in your life asking you to reconsider your lifestyle and possibly deciding to spend more time in one place, like, buying an apartment or a house.

The Opossum or Possum as Your Totem Animal

You can be a great strategist, planning up to details the actions for achieving some goals. You know when it is time to act to achieve success. You have a kind and sensitive nature, and you are nurturing and protecting towards the ones you love, especially your children.

You tend to be a loner sometimes, but enjoy a good company of friends and acquaintances. When it’s needed you can be a good team player, ensuring the success of your team.

With the possum as your spirit animal, you are most likely a very resourceful person and you don’t need much to be happy.

You are also very adaptable and don’t mind changing places of residence when the old ones don’t fulfill your needs anymore. You often don’t have a permanent place of residence, you don’t own a house or an apartment, but you rather tend to move from place to place, and even changing countries along the way.

That is something which makes you happy and content. Your partners and family need to have the same traits to be able to follow you on your journeys.

What if the Opossum or Possum Appears in Your Life?

When the opossum steps into your life, it might be a warning of some potential danger which requires you to lay low for a while.

Maybe the danger is not apparent and it’s important to take time to think and plan a strategy of your actions so you wouldn’t make some wrong moves.

The opossum showing up in your life could be a sign of some new opportunities you will be fortunate to seize. They will open some new chapters in your life.

This totem animal could appear in your life as a reminder to devote more time to caring and nurturing your loved ones, especially your children. Find more time to spend with them, simply enjoying each other’s company.

The opossum could also be reminding you to stop making excuses for not being able to succeed in something you want.

Instead, begin using all available resources to get what you want. You already have that gift, you simply need to begin using it.

When to call on Opossum?

You should call on opossum as your spirit animal when:

Dreams about Opossum or Possum – Interpretation and Meaning

If an opossum or possum appeared in your dream, that could be a warning sign.

Maybe someone from your surroundings is a person you cannot trust, or someone being deceptive and trying to manipulate you in some way.

When you have a dream about an opossum, the dream might be asking you to realize that some things aren’t as they appear and you need to put in the effort to see through these things.

This dream is often a sign of deception, lies, secrets, self-deception and misunderstandings.