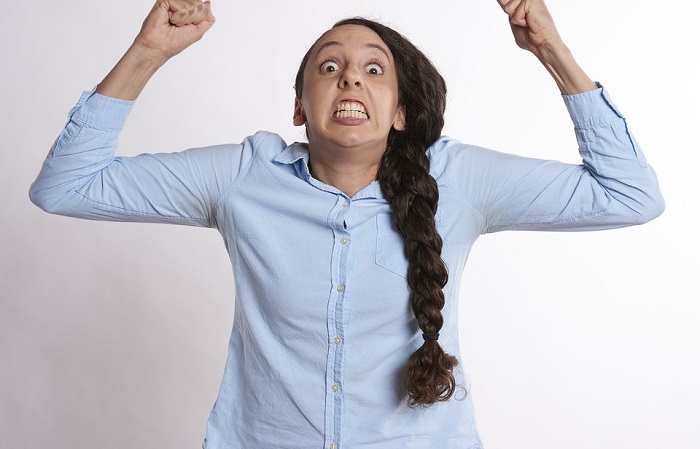 People in dreams are one of the strongest motives, and people seen in different emotional states, behaving in different ways, is very interesting to look at and examine.

Each of us deals with different emotions throughout our lives.

From feelings of love, contentment, and peace, through guilt, pain, and suffering, all the way to hatred and resentment.

These are all the emotions that are stored in us over the years and on the basis of which we build our habits and personality.

Today, we are looking into the dream motive – what does it mean to see a mad person in a dream.

First of all, we must take a look at what is being mad in reality?

Primarily, anger is very common, especially in stressful times, and people do not hide it. It is caused by what we see in ourselves and what we do not like, and in some way, this is the state that shows our blindness.

When we are angry at another for something, we should ask ourselves what guilt we bear because of that same thing, what our shortcomings are pressing on us, so we try to resolve them through others.

So being mad is not directed to the person we are mad at or an object, but on ourselves, and following this lead, we could say that dreams that have the primary motive anger/being mad at someone in a dream, shows that it is a right time to deal with ourselves.

The problem is when anger turns against us. People in anger often say something they do not think and thus create additional problems for themselves and others. In addition, prolonged anger and misdirected anger lead to a lasting feeling of resentment that can cause physical and mental illness.

When we talk about anger, it is mostly about stressful conditions in which you do not feel happy, notwithstanding whether you are mad or someone is mad at you and whether you are shouting or yelling at you.

But as is often the case in dream analysis, dreaming such stressful conditions does not significantly imply something terrible that will occur in your life.

As we have said – such a dream is not bad, it just shows that you need to move on and learn from this dream.

So, if you dream of seeing a mad person, it can have several definitions depending on all elements in a dream.

If you dreamed that a mad person attacked you, it may mean that you should be careful in the coming period and not wait for someone’s patience.

It is possible that you may be joking too much about a person and that their patience is running out, and you should stop doing so before it is too late. You underestimated her, and she’s just waiting for a moment to reciprocate, be careful.

If you dreamed that a mad person spat at you in a dream, it could indicate that someone in the coming period will disappoint you by showing you disrespect.

It is an ungrateful individual who is not worthy of your help and attention, and you should cut off any future contact with her.

To dream that a mad person is chasing you in a dream may mean that you may commit some traffic offense with the wrong person in the coming days.

This will be a person of a supernatural nature that you should not mess with.

The best thing for you will be to call the traffic police first, who will conduct an investigation and be there to protect you from lunatics if necessary possibly.

Dreaming of fighting a mad person may mean that in the coming days, you will be trying to prove something to people who are not on your wavelength and intellectual level so that any attempt to enlighten them will be hopeless, and you should not rely on them. To expend your much-needed energy.

If you have ever dreamed that a mad person attacked you on a city bus out of pure peace, it may mean that in the coming period, you will experience some stress where you least expected it.

It is possible that a person you thought was your friend and knew you would disappoint you with some of their actions.

Seeing a madwoman in a dream suggests that for some reason, the journey you have long planned and rejoiced in will be in vain because the person you are traveling with will be in a very negative mood and will make you feel lousy energy.

Try to talk to her before starting the trip to avoid some conflict situations and conversations along the way that could lead to the collapse of the road.

Anger and rage are completely normal, usually healthy human emotions. But when they get out of control and become destructive, we feel that we are in the power of unpredictable and intense emotions. And as such, they are significant when they appear as dreams in symbols.

If you are the mad person, you see in a dream and participate in some argument, and such a dream carries a good symbolical value.

This dream can be a bearer of good news, and there is a perspective and carefree time ahead of you.

A stressful event that you dream of in this form is often an indication of a quiet period in reality. If, on the other hand, you dream of a big hassle at a light, or a similar event, it is likely that numerous competitors are hiding behind your back, who can hardly wait for some of your errors and stumbles, to enjoy your torments.

If someone else is mad at you and cannot say to that person what has been bothering you, such a dream may be the symbol of helplessness. You will probably try to fight for your views, but you will not succeed.

Characters nearby will think you have made bad decisions and try to convince you to change your behavior.

Now, the dream about seeing a mad person can have additional elements, like your interaction with it, and it can go to extremes.

For example, you could not listen to it, and you have killed the mad person from your dream. If you dreamed that you killed a mad person, it might suggest how you are tired of someone’s behavior and that you have decided to get in the way.

This is a person from your close environment, probably from work, and who is quite arrogant towards everyone around her and mentally abuses everything. You will be the one to stand in her way and the first to oppose her.

After that, he will stop such behavior and will probably change his job out of shame.

If you may have dreamed that a mad person is talking to himself, it could suggest that you will be someone’s collateral damage. You will come across a landmine by addressing a person who will vent all his anger on you, shouting and insulting you.

It will be someone you know, and don’t let her run into you with a lot of insults at your expense, but withdraw, apologize, accept her only when she has learned her lesson and sincerely repented.

We must add one more version of this dream – the one version where someone is mad, and that person is not speaking or doing anything to you, but you can see that he or she is very mad. This dream can be a positive sign. This is the dream that speaks of your general health.

That is, this dream shows that you are apparently stronger than you think at the time. It can also suggest hints of a future, a carefree period that is coming.

It is said that there is someone else living in each of us, someone we don’t know. He tells us through dreams that he sees us differently than we see ourselves.

And, if we find ourselves in a hopeless situation, then the other can help us to fundamentally change our attitude, exactly the attitude that brought us to such a difficult situation.

So, we know that anger, in milder or stronger form, is one of the basic emotions, in addition to happiness, sadness, fear, and disgust.

Each of the basic emotions has had a protective role throughout the history of mankind, so the role of anger is related to the reaction of the sympathetic nervous system “fight or flight”.

In particular, anger is associated with the “fight” reaction that occurs when a person finds himself in danger and assesses that he can overcome that danger.

So, if you have seen a mad person in a dream may suggest that now is the time to escape and avoid some form of a danger that is close to you in some form.

In this sense, the dream about seeing a mad person is just that – a dangerous event, a real person, an obstacle that you should avoid in the next few days.

Many people admit that being mad and surviving anger attacks have helped them realize their own mistakes.

It moves us to stand up for ourselves and defend our boundaries, which is related to the feeling of self-esteem.

Maybe in this way, dealing with the dream that had such a motive, you can stand up for yourself and build self-esteem.