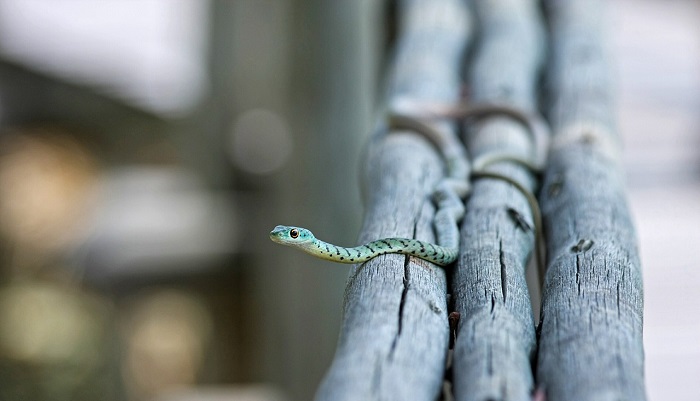 For most people, the first thought of snakes provokes fear and chills down their spine. What is the reason for such feelings? Is it snakes’ cold skin and reptilian appearance? Are those stories about snakes’ venom or legends from the Bible?

Snakes have been considered scary and magnificent at the same time, despised and worshipped, judged and admired, since the dawn of time.

According to various researches and historical, archeological, anthropological and other related data, snakes were perhaps the first animalistic deity in human culture.

The earliest evidences of snake worshipping originate from prehistoric times. Certain recent archeological findings prove there was a society in ancient Botswana in Africa that had practiced the cult of Piton god. These findings could be tracked far back into past; they are as old as seventy thousand years.

In some of the earliest human societies, snakes were symbols of all life. Because of their unusual physical form, they associated people of something that has neither a beginning nor an end. Ancient stone paintings depict snakes as a simple line; this depiction was used as a symbol of overall existence and life. It is interesting to note that in certain languages the same or similar one is used to express ideas of both ‘a snake’ and ‘the life’.

Snakes have always been a powerful symbol and have significant symbolical position in almost every cultural system and tradition on the planet. However, snake symbolism varies greatly.

These reptiles represent various concepts and ideas. Throughout the ages, snakes were glorified and awed, but also hated and disgusted of.

Snake symbolism, the Cycle of life

Snakes make many people feel uncomfortable even thinking or talking about these reptiles.

Perhaps that fear originates from the idea that snakes represent evil and darkness, which, for the most part, comes from Christian beliefs. On the other hand, reptiles are so different from humans and we cannot find a single thing we have in common, at least biologically.

Yes, we both breathe and inhabit the earth, but reptiles are ‘primal’, compared to humankind.

Snakes embody the idea of something ancient, ‘the first’, old, primal and instinctive. That makes these reptiles’ symbolism dual; we associate them with the beginning of all life, with primal forces that have created the world, but, at the same time, with energy that is raw, uncontrolled, unrestrained. 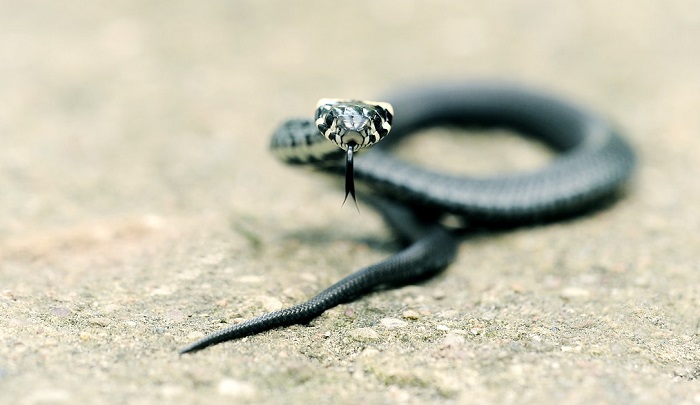 That makes us feel particularly afraid of snakes. In addition, certain species are known for their deadly poison, which make snakes’ negative symbolism grow stronger.

However, in esoteric lore and almost all of ancient civilizations, snakes are a complex and dual motif that provokes ambivalent feelings in humans. Snakes represent the oldest form of symbols of what we call collective unconscious mind. In other words, snakes represent one of the earliest archetypes of structures of the unconsciousness shared amongst humans.

Cults of the Snake are present in beliefs, superstitions, rituals, mythology, religious concepts and folktales of various societies.

In almost all of these depictions, snakes are represented as wise and dangerous at the same time. Esoteric lore considers snakes wise and uses them as a symbol of spiritual initiation, while in Christian iconography, snakes are identified with the idea of the beginning of human mortality.

In contemporary psychology science, snakes represent the relation between conscious and unconscious part of human mind.

These fascinating reptiles have significant place in almost all areas of human thinking. They are universal symbol of all phases of life, which leaves no one indifferent. The most common concepts and ideas associated with snakes are life, strength, energy, health, wisdom, intelligence, cunningness, deception, trickery and devilish force.

As you can see, snakes’ symbolism is rich and turbulent.

In Ancient Egypt, snakes were considered symbols of royal power, for example.  Egyptian cobra was believed to represent an incarnation of the goddess Wadjet, the protector of pharaohs’ lands. Uraeus, the stylized version of cobra representation, was a common decoration of pharaohs’ crowns, used as an acknowledgment of their claim over the land.

In Ancient Greece, snakes were associated with the power of healing. This association comes from snakes’ habit of regular shedding of their skin; this snakes’ natural behavior was symbolically associated with ideas of regeneration, rejuvenation, transformation needed for progression and vitality. The Staff of Asclepius is still universal symbol for medicine, all around the world.

Snakes have an amazing ability to adapt to their environment and survive harsh conditions.

Snakes symbolism, between sin and spirituality

You definitely know the Biblical story about snake in the Garden of Eden. The Snake was the one that offered the ‘fruit of knowledge’ to Eve. After the first of humans have sinned eating the forbidden fruit, God cursed all three of them, beginning with the Snake. Since that time, snakes are considered evil, deceptive and cursed animal.

There are no clear proves this Biblical snake was actually the Satan himself, but people commonly identify it with devilish forces. In traditions older than Christianity and in certain others, as well, snakes are depicted in a completely different manner. We have already mentioned Ancient Egyptian and Greek depiction of snakes.

Ancient Minoan civilization had their snake goddess, often portrayed as woman holding a snake in each of her hands. Many beautiful snake goddess figurines were found on archeological sites in Knossos, years ago. Minoan snake symbolism was most probably related to renewal of life, fertility and divine wisdom.

In shamanic traditions, snakes are seen powerful totems, guides of people souls. Snakes are also commonly believed to be capable of travelling between realms of the Living and the Dead.

They are often seen messengers from the Underworld, but not devilish ones. For mystics, a snake represents spiritual journey and awakening, spiritual transformation, self-acceptance, inner knowledge, intuition and spiritual powers.

Quetzalcoatl, the feathered serpent, was Aztec deity of air, wind and knowledge, a god much appreciated and awed in Mesoamerican traditions. Both the patron and merciless deity, Quetzalcoatl is a good example of snakes’ dual symbolism in general.

In cabalistic lore, snakes represent wisdom and continuity of life cycles; a snake is the guardian of the Tree of Life. There are even correlation between interpretations of serpent symbolism and that of human DNA.

Serpentine way of moving is similar to the appearance of our DNA; both are closely related to the concept of life cycles, constant movement of cosmos etc.

There are even obscure theories about disguised alien rulers of the world, whose original form is reptilian. It may sound like a science fiction story, but similar beliefs could be found in ancient traditions of peoples that were never in touch during old times.

Myths about dragon or snake people could be found in Aboriginal, Zulu, Amazonian folklore and even in Babylonian mythology and in Sanskrit.

In certain Balkan cultures, Serbian folklore in particular, snakes are seen mysterious beings connected with the underworld. Snake superstitions and beliefs are closely related to the cult of ancestors, strong in Serbian folklore. These reptiles are often used as ritual animals.

So far, we have seen how powerful and mystical snakes are. The complexity of snakes’ symbolism suggests they could be incredibly strong spiritual guides. If you are guided by the Snake totem, you certainly have an opportunity to gain great knowledge and learn a lot about yourself and the world you live in.

Snake totem has very strong energy; it is a great, but merciless teacher. Snake totem will help you build your self-confidence, to accept yourself the way you are and to embrace opportunities this life has to offer you. Snake totem is a mysterious guide, the one who will make you wonder about things in life.

You are probably naturally curious and adventurous, so your Snake totem will nurture these traits. You could start doubting everything you have known so far, so you can grow stronger and more ready for challenges of destiny. You should not feel discouraged, even if it could seem as if everything is falling apart. That is all for the greater good.

Snake totem teaches us to accept change, as an inevitable part of life. Everything needs movement, in order to progress. Failure is needed, as well as success is desired. Snake totem will help you learn how to adapt yourself to given circumstances.

The ability to transform is an incredible gift; it does not mean that you will become someone else, but you will learn how to use your own skills and talents, in order to move forward in life.

Snake people know they are in control of their destiny, at least for a great deal of things happening to them.

They do not blame the cosmic plan for feeling bad; they are courageous and capable of managing things on their own, as well as for taking responsibilities for mistakes they have made. They believe life goes on in cycles. If times are hard, it does not mean they will only get worse, on the contrary.

People guided by the totem of Snake are unique, charismatic and mysterious.

They are wise and they love to earn. Most of the time they are quiet and reserved, but they are not shy. They are usually typical introverts; Snake people love company, but they need time for themselves.

To others, they could appear dark and gloomy, but they are not pessimistic at all.

Interestingly, Snake people are most commonly down to earth and modest. They do love extravagant, luxurious and elegant things, but they are never slaves to material values. Snake people are adventurous, in both physical and abstract way. They love to travel and try new things, as well as they love to learn and develop their spiritual part.

As well as all others, Snake people have their negative side.

They could go to extremes when they desire something, because they are generally not sensitive and gentle, compared to other people. They could become obsessed with what they want and even hurt others in order to get it. They could also be very passive-aggressive.

Snake people are known to be efficient manipulators.

However, if you learn how to use your totem’s guidance in a good way, you could achieve amazing things in life. Do not fall for goals that mean hurting others. Try to be at least a bit more open to people around; sometimes good advices come from an unexpected source.

Snake totem will definitely open your eyes and make you see who you really are. That knowledge will help you to improve yourself.