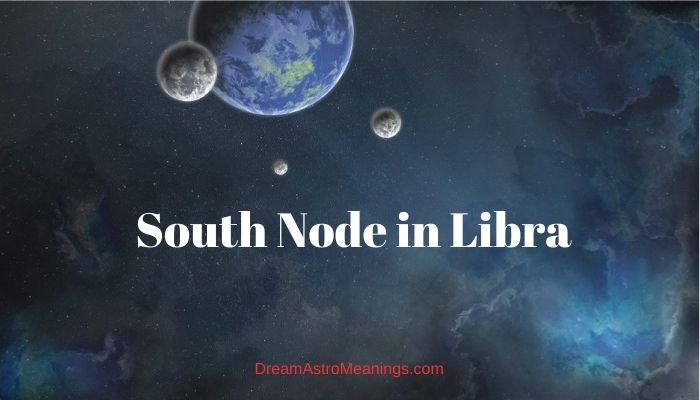 Today we will discuss South Node in Libra. You have noticed that today in society the topic of selfishness, the interests of the individual and the defense of one’s rights stands almost on one shelf with the great sins of mankind.

And meanwhile, literally from every iron, charismatic trainers say that you need to prove yourself and open up, go against society.

Many people, perhaps you, do not know how to do the right thing.

On the one hand, you are ready to go against stereotyped thinking, other people’s expectations and hopes.

But on the other hand, you are worried about what people will say, because it is not good to think only of yourself.

As a result, you do not reveal yourself, and the society is dissatisfied with you.

Although the latter will probably always be unhappy. And what does astrology think about this?

As we have just indicated, it is diametrically opposite to the rising Moon Node, called the North Moon Node or Dragon Head. The southern lunar node is also called the Dragon’s Tail.

The meaning of this lunar axis is related to karmic astrology. For her, we start from the fact that the human being is not on Earth for the first time, but that we are an accumulation of experiences from past lives. In this way, the concept of reincarnation is illustrated by the lunar axis.

The South Node refers to our past, while the North Lunar Node speaks of the future and the main lesson we have to learn in today’s life.

It is the symbol of the past. All those experiences that have already happened are contained in the South Node. It symbolizes all those habits that for reasons of comfort, to make life easier, we do not want to put aside.

This means that we prefer the path with the least resistance, the one that does not suppose us any kind of surprise or at least any problem that we cannot solve. The tranquility of comfort in the face of the risk of the unknown.

Astrologers of the past well understood the problem of the relationship “I and They”, which in the star chart is represented by the axis Aries – Libra. Note that Libra is the only “inanimate” sign. This hints at the fact that many models and ideas about life are artificial in the minds of people. They have no personality, no life.

The problem “I and They” is especially vivid in people who have Lunar Nodes in the natal chart in the sign of Aries and Libra.

Today we will analyze in detail the position of the South node in Aries, the South Node in Libra.

The South Node in Libra says that in past lives you have completely mastered the art of compromise and diplomacy, you can easily smooth out all sensitive issues. In this life, try to avoid all conflict situations. But in vain!

Since the South node in Aries directly says that your karmic task is to learn to manifest and defend your interests, and sometimes it is quite tough. You need to learn to take the initiative in whatever situation you find yourself in.

The main task is to understand that compromise is certainly good, but sometimes it turns out to be useless.

If you deny the mission of your South node (and under Ketu in Libra, 99.9% of people will deny, because in past lives they were diplomats), then fate will constantly immerse you in a situation where you need to show your strength, express your opinion, take the initiative and become a leader.

Starting from attacks by street hooligans, ending with legal proceedings. As if fate intentionally throws boors and aggressors into your life, forcing you to embark on the path of Rahu in Aries, on the path of a warrior.

On a psychological level, this position often speaks of childhood trauma when you first entered society. Also, your I could not be accepted by your parents, repeating day after day that you should be like everyone else, not show off, not brag.

As a child, you could absorb the feeling that everything needs to be done for show or according to the rules, and what exactly you want does not matter.

In adulthood, people with this position of Knots are sometimes very nice, sociable and kind.

But behind the façade of exemplary behavior, there are often tons of suppressed desires, unfulfilled ambitions, and unspoken grievances.

Over the years, especially at the age of 36-37 years (the time of the second return of the Nodes), you can feel a global emptiness in life, even in spite of external well-being.

It’s like a huge hole inside and the feeling that you are living an absolutely alien life. But the fear of proving oneself prevents filling this void, because it immediately pops up: “It’s not good to think about yourself, what people will say?”

Libra is a sign of the element Air, moreover, a mature one. This element forms in you sociability, contact, spontaneity in communication. You have a sanguine temperament, mobile, active and unstable, susceptible to outside influences.

In a past life, you have worked out the Aries program, that is, in this life you should give up many things that are familiar to you: from intolerance, rudeness, from excessive impetuosity, from activity, from snobbery, you should not “push others with your elbows”, rushing forward. You should rely on the best features of Aries, that is, fearlessness, independence, willingness to help other people.

You need to develop in yourself the traits associated with Libra, that is, strive for balance, tranquility, justice, harmony in relations with people and the world around you, try never to rush in anything, not to be ahead of events. You need to cultivate endurance, benevolence in yourself, remember that all their actions should be balanced, calm, and wise. Your main bet is wisdom!

Many individuals with this Node position are stubborn and headstrong. Listening to others is new to them, and they find it uncomfortable and undesirable, feeling that it makes it difficult for them to move forward.

By supporting others, they stifled their own identity. In a past life, they were indecisive and had a hard time without someone else’s support. They were sensitive to compliments, flattery and susceptible to influences and suggestions. They aspired to be in the company of artists, spiritual people and had a refined taste.

These people need to spend a lot of time with themselves, to get to know themselves.

Although they are open and filled with love, they get angry if others threaten their space. It is good for them to pay attention to the relationship they have with themselves. Martial arts classes would be perfect for releasing their energy.

People with the North Node in Aries feel repulsion towards competition, and competition on the surface brings out the best in them.

They are often attracted to people who treat them badly or let them down. They need to stop focusing on others and focus on themselves instead.

Subconsciously, these people believe that they cannot survive without others and therefore strive to establish interdependence with stronger people from their environment.

But then they resent their partner for “jeopardizing” their independence and blame him if they don’t achieve their own goals, even though they have created that unhealthy addiction themselves. What they are and who will not abuse their nature.

Seeing yourself through the eyes of others is for people with the North Node in Aries equal to loss.

They subordinated their needs to the needs of others and now they have to go “the way of the North Node” to concentrate on themselves, get rid of dependence and seek approval from others.

They need to take the initiative, they need to be autonomous and independent. In this incarnation, it is not in their favor to see themselves through the eyes of others, because it prevents them from building their own identity.

They need to take responsibility, become independent, courageous, follow their own desires and start things.

With the North Node in Aries, they are destined to be a leader, to put themselves first, to be “pioneers” in an area.

These people are mostly oriented towards emotional connections and getting closer to others. They are tactful, social and focused on teamwork. They feel most comfortable when they can rely on others and when they can cooperate. They do not like deep emotions and usually try not to show their anger and aggression.

They think that any form of pressure and noise is socially unacceptable and undesirable, and they will try to keep their emotions under control.

As the North Node is in the sign of Aries, these people must build their image and inner identity through self-initiative and personal efforts without relying on other people, especially not partners.

They need to be guided by their own will and plans, to learn how to express anger and aggression, and to be socially acceptable, to take more risks and allow themselves to sometimes be impulsive, hasty and dominant.

These people have a great need to be leaders, to react and to fight for others, possibly just for those who do not have the right to speak for themselves. However, as long as there is a desire to maintain balance and harmony, the person will not want to react differently than he is used to.

People with this combination of nodes are accustomed to personal expression. Those from a past life bring energy, creativity, assertiveness and sociability.

They can be much focused, independent and often rely on themselves. These traits can prevent them from gaining emotional intimacy with loved ones. They have a strong ego and are distrustful of co-workers, especially when it comes to work or joint plans.

In family life, these people tend to be manipulated and feel most comfortable when they decide and create on their own. Emphasized intellect and logic prevent them from achieving harmony and togetherness with their partner.

However, they have a desire to realize themselves in that area and to feel the connection with others. It is possible that he will focus on a job that requires contact with people, exchange of ideas, creativity.

They need others to see and value what they do, but the only way to achieve that is to learn how to cooperate, how to ask for help, how to rely on friends.

It can happen that they get married late, because they are afraid that they will lose their freedom, although they generally search for community all their lives.

The southern moon node in Libra indicates that these individuals in many previous lives supported others and neglected their ambitions for them and their partners.

Since they possessed artistic talent they could have been artists or had their own galleries.

They were counselors, helpers, “people behind the scenes” who support others.

So they made others stronger through support, gentle words of encouragement, and neglected their own needs. They were used to giving, being “team players” and supporting others, not thinking about himself.

Libra is a sign of the element Air, moreover, a mature one. This element forms in you sociability, contact, spontaneity in communication. You have a sanguine temperament, mobile, active and unstable, susceptible to outside influences.

In a past life, you have worked out the Aries program, that is, in this life you should give up many things that are familiar to you: from intolerance, rudeness, from excessive impetuosity, from activity, from snobbery, you should not “push others with your elbows”, rushing forward. You should rely on the best features of Aries, that is, fearlessness, independence, willingness to help other people.