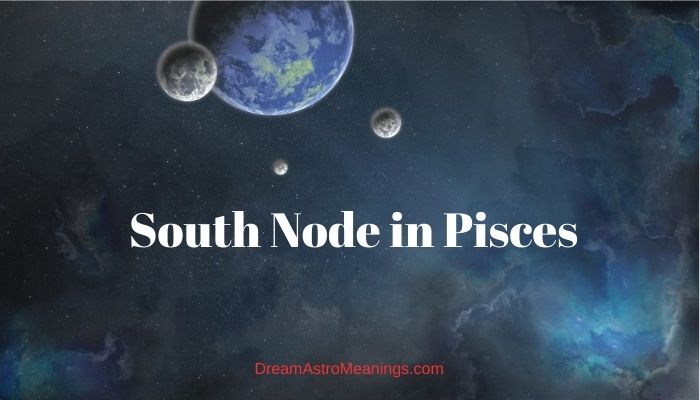 The nodes of the moon are immaterial points (so they are not visible, concrete objects in the sky) and represent points where the moon on its way around the earth intersects the ecliptic (the ecliptic is the apparent annual orbit of the sun).

As all three celestial bodies are in constant motion, and the Moon rotates, together with the Earth around the Sun, the Moon’s nodes also move, so in 18.6 years they go around the entire zodiac circle that is for a year approximately 20 degrees.

The North (ascending) and South (Descending) Moon nodes in karmic astrology are an unavoidable factor in the interpretation and analysis of the karmic horoscope, which means that they have a very important esoteric symbolism that they carry with their position and relationships with other planets.

The Moon is the closest planet to us, and in the astronomical sense it is a satellite, because over time the Earth’s gravitational field slowed down the Moon’s rotation around its own axis until it stopped, so the Moon always shows the same side towards the Earth and follows it in its movement.

In the astrological sense, the Moon is a planet in which the memories of all our past lives, feelings and essences of our soul are contained.

In karmic astrology, the position of the Moon and its nodes indicates to us in which phase the learning of the soul is, which lessons it carries from the past and which lesson it has to learn in this life.

Well, the symbolism of satellites can be interpreted as follows – everything we have ever made, started and felt always follows us, just as the Moon follows the Earth and the Sun in their movement (and its position towards us depends on their positions, which we can follow through the Moon me).

The nodes of the moon are in constant opposition, so they are always 180 degrees apart. They represent the primary opposition of creation (father and mother, life and death, taking and giving, creation and destruction, past and future life).

If the two points in the circle are furthest between them, the whole circle stands, i.e. our life. They represent the end points of our life – they represent the set of all memories of the past life, but also our potential possibilities that we create for the future life.

They are the endpoints of what we can achieve in this life – because what we have sown in past lives (as seen from the position of the Southern Node of the Moon) and what is presented as our endpoint that we can reach in future life (how potentially we can we sow in this life can be seen from the North Node of the Moon) is our whole life with the possibilities we have in the natal chart, in the form of the energies of the planets and their relationships.

Probably it cannot be the clearest to most people, but if we know the concept of time as astrology presents it to us and if we have a harmonious relationship with it, it is very easy to know this philosophy of looking at life. We can understand what time is from the cycle of planets, through the rhythm of breathing of our Universe, through the circles of time that return to the same place cyclically.

Time is recorded in our natal chart, in the cycles of the planets that were arranged on the day of our birth.

Well, the connection with certain cycles is closer to us or not, depending on the moment of time in which we were born.

In astrology, there are no linear cycles in the sky, only circular ones, and the past and the future are one, represented in a circle that rotates in one cycle. What has been is what will be.

The mouth of the Dragon or the North Node of the Moon as some call it is fire and what we take in the form of food to have the energy of life.

The Dragon’s Tail (Southern Moon Node) is what is left of our food, what we need to throw out after metabolism or ultimately what is left unresolved from past lives, like tails we pull from the past.

Such people have a very rich imagination, fantasy, a deep and immense inner world. In life, with the help of intuition, they adapt to any environment.

Love for secrets, secrets and spiritual issues is characteristic. Mental depth and idealism, sympathy and understanding of someone else’s inner world with the help of sensory feelings and the gift of foresight are also very pronounced.

They are excellent healers of souls – psychologists, psychotherapists, nurses. They look for sincerity in everything, know how to sympathize with other people, empathize and advise. These are spiritual seers and hermits, wanderers or refugees, healers and guides to the higher worlds.

Character advantage is the spiritual strength with which these people find answers to the deepest questions of life. They always have a desire to help, take care of and take care of others. Expressed compassion and mercy to all who need help.

Characteristic features: they value their inner world more than the outer one. For them, spiritual pleasure is dearer than an external career. Therefore, they love solitude, communication with nature, with art.

From the weakness of the external character, a duality of life is possible, slave psychology – susceptibility to other people’s influence, dependence on situations, indulgence to one’s whims, slovenliness and laziness. A person can withdraw into himself, in his experiences and problems and thus destroy himself from the inside.

Others see you as a kind, modest, shy person. You hide your thoughts, but you cannot hide your feelings. You are guided by feelings, intuition, heart, but not your head. You are not as structured and tough in your relationships as many other people.

This can lead to ambiguity, uncertainty, and it can be a very flexible, holistic path to achieving any goal. In a noisy company, you often fade into the background because you have a negative attitude towards conflicts.

A tendency to passivity is characteristic – to feel, know, expect, observe, but act little. Your way of solving problems is to let them dissolve or exhaust themselves, and not use your will and not interfere.

In the physical world, Neptune corresponds to – chaos of virtual particles, entropy and heat, Brownian motion. This curtailed time is the power of time and the power of evolution, past-present-future, and the eternal cause of everything that exists.

The function of Neptune is the highest being, maintaining the stability of the World, a mixture of all principles in the world. The qualities of Neptune are increased sensitivity and sensitivity, which can develop into extrasensory perception and telepathy.

Neptune helps people of creative professions, in spiritual pursuits, where you need to be inspired no and special inner understanding of things. The negative side is that there is no concreteness when a person himself does not know what he wants.

Finding Neptune in the sign of the Zodiac shows our spirituality, unity and love for the people around us, our attitude to nature. At the lowest level – alcoholism, illusion, isolation from reality.

Neptune in the houses of the horoscope shows how a person expresses his creative imagination, to which he is especially susceptible. A good indicator of human love, solitude with nature, creative inspiration. However, from this house one can expect self-deception, illusion, lack of clarity, slander.

A friend of mine recently expressed an unexpectedly seditious thought. It sounded something like this: a person does not have to strive to maintain his health, that is, eat right, observe certain rules of a healthy life, and give up bad habits.

Because as a result of titanic efforts, he will extend his life quantitatively, but will not improve qualitatively. And why live long if you spend precious time not on getting joy, but on following the rules: you limit yourself, deprive yourself, force, even if you persuade.

Why live without joy? Maybe take the path of least resistance? Relax and have fun? Do what you want, eat what is pleasant, walk, drink, smoke, after all? You may not live 90 years, but preparing to retreat to the last refuge, there will be something to remember.

Once in the book of Adam Jackson I read the confession of a dying woman, I bring it to your attention in support of the above assumption:

“If I could live my life over again, I would try to make many more mistakes. I wouldn’t be so perfect anymore. I would relax. I would be flexible. I would have behaved more stupidly than on the trip I had already experienced. In fact, I now know very few things that I would take seriously. I would be a little crazier. I would be less sober.

“Do I have to live right?” – A question in the Hamlet format that has no answer. But not for everyone. For example, Virgo knows exactly what it is about. In any choice, she is guided by the primordial “SHOULD”. And if it is necessary, so it is necessary, what is there to discuss? Questions of correctness, usefulness, rationality are not subject to discussion. How can you challenge your life credo?

And in complete opposite to her Pisces, who are not able to live by the rules. These are the very ones who will choose a short but rich life.

So Hamlet’s question still has an answer, there are just two of them. And both are true, but for different people.

They are the endpoints of what we can achieve in this life – because what we have sown in past lives (as seen from the position of the Southern Node of the Moon) and what is presented as our endpoint that we can reach in future life (how potentially we can we sow in this life can be seen from the North Node of the Moon) is our whole life with the possibilities we have in the natal chart, in the form of the energies of the planets and their relationships.

We consider the case of the location of Ketu in Virgo and Rahu in Pisces. And this means that a person living according to the “SHOULD” program needs to reorganize to a new, unusual “WANT”. Let’s not even say so. Pisces do not chase their desires, they are simply pathologically incapable of doing what their soul does not respond to.

They are not guided by reason, even knowing that certain actions are necessary, they still cannot force themselves. Virgo will say that it is so wrong.

However, this is exactly what she will have to learn.