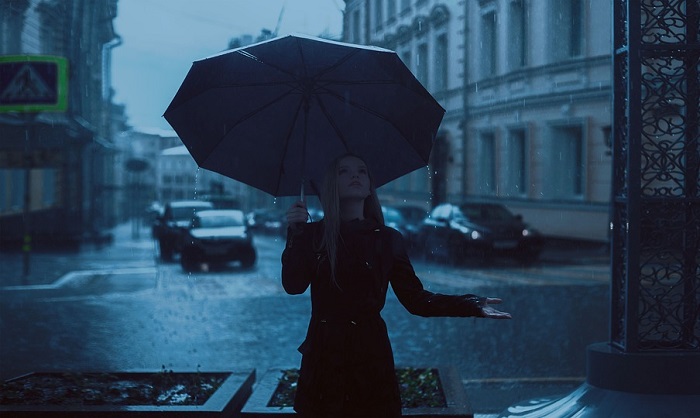 When we look at the past, we can see that the Umbrella is seen as the status symbol, and in a symbolical way, it was (still is to a certain extent) as the representation of power and was an attribute of a deity.

Nowadays, Umbrellas are a more practical then symbolical thing – it protects from the rain, but it is also a fashion accessory.

The place of the origin of the Umbrella is not known – maybe China or Egypt, perhaps India, where it was seen as the symbol of a deity.

In some cases, the Umbrella is the representation of the sky, the fertility goddess that also protects people.

Does this motive keep the same meaning when it is connected to the dream world? Well, it all depends on how you dreamed of it… Keep reading…

First of all, if you had a dream about an Umbrella, know that it has different interpretations.

Of course, it differs from the way we dreamed it – it depends on the appearance of the Umbrella, its color, in what activity this object is involved.

So, let us begin – if you had a dream about an Umbrella as is, with no specific details about it, in that case, such a dream suggests that in reality,

You are seeking protection and support from someone around you. Be careful not to ask for it from someone who is not trustworthy. It should be a member of your family or a close friend who is influential in society.

Don’t worry, and it’s the person who cares about you, and that will help you for sure.

One more dream is very common among dreamers – the one in which you see an Umbrella that would not open. This dream does not carry good symbolism – such a dream indicates that it will not arrive from the person you expect help from. It is the matter of your expectations that do not match the reality of a situation.

This dream has an alternate variant – if the Umbrella is opened only after a few attempts, it could mean that the person will help you, but not when you insist on it, but when it suits him. What you feel about this reveals a lot about your attitude in life. Are you doing the one who shuts your eyes to such events? Arm yourself with patience, in this case, and you will need it.

To dream that an Umbrella that has holes on it, that is leaking on few spots, means that you will not be able to protect yourself from malicious people at work, so you should team up with someone to get through the situation.

If you dreamed that the wind broke the Umbrella, you are carrying it in your hands, and you would need a lot of effort and patience to get out of your situation. It is like patience is the trait you need to work on from now on; it is a tedious task but worthy.

If you dreamed that someone stabbed you with an Umbrella (with the tip of it), it means that someone who has protected you so far will stop doing that. This dream does not have good symbolism because it is about stabbing from the hand of the person you had an endless trust.

Try to think about who it could be and be careful not to intentionally provoke anger in that person who has met you in many life situations so far.

In a version of a dream where you are the one who is stabbing someone else with an Umbrella, such a dream symbolizes quite the opposite, and that is that you have met someone whenever he called for help and supports in life, but for some reason, that person made you very angry, and you are not ready to do bad things to him. Forgive that person soon, and you will be much easy.

Decoding the Dream about Umbrella

Dream about an Umbrella can go even further – for example, in the version of a dream where you are holding tightly to it while a strong wind lifts you into the air with it means that you should give up something you are hooked on after.

Some things are simply not destined to happen, and it would be best for you to simply accept it and allow destiny to play a role in your life course.

Do you know about an old superstition where it is believed that when you open an Umbrella inside of a house, it is a bad sign? In the same context, when you open and Umbrella in the home, in a dream, it indicates that home safety is endangered. You may have heard that someone in your neighborhood has been robbed or even injured in an attempted robbery, so you care about the safety of both you and your family.

To be calm nowadays, there are various types of protection for your home, and do not hesitate to take advantage of the services and technologies that the twenty-first century offers us.

In this sense, if the dream you have shown you defending yourself using an Umbrella as a weapon, such a dream may come as a representation that you are bound to dominate a current situation.

Dreaming that you hit someone with an Umbrella means that this fight, whatever it may be, will be unresolved. You will come across a credible opponent who will be able to match you in everything, so you will need reinforcements to triumph. It is not a waste of time. Just try to think in that context and focus your strength, having in mind a possible triumph.

Dreams in which you see an Umbrella getting out of your hand due to a strong wind could mean that turbulent times are ahead of you, and you must be prepared for it, with some kind of protection if possible.

It could be a person or a piece of good advice. This could mean that the situation you have kept under control so far will become more complicated and that you will no longer be able to control it.

You will probably miss some very important detail that will lead to this.

Try to think about what it is that you are or are about to miss because you have relaxed too much.

As you can see, the dream that has the main motive an Umbrella, seemingly, an everyday object with no symbolical value, has so much to tell you, and in most cases, it is related to the idea of protection, or a warning that there is something out there that jeopardizes you.

In some further examinations of this dream, there is one where you see shooting from an Umbrella means that you are among people whose motto is all for one, one for all.

Together, they make their way through life in both the business and social spheres of life.

You probably almost fell into one such team that checks and tests everyone who wants to be among them, but for some reason, they liked you and passed their tests.

To dream of flying with an Umbrella for children means good physical development, but with the control and perseverance of parents and adults, it means that in the coming period, there will be a success in all fields.

To dream that an Umbrella opens and closes on its own means that someone from your environment wants to draw your attention to yourself for some reason.

It could be one of your new employees at work who wants to be rewarded for their commitment, but it can also be that you just don’t notice someone courting you.

You are preoccupied with your responsibilities and try to find time and hearing for the people around you, even if only to honor them.

To dream that someone has hit you on the head with an umbrella means that someone from your environment is trying to tell you that you should come to your senses.

Probably yes, you have made some mistakes that are not peculiar to you, and that now is the last moment in which you would have to start and correct some things.

If you dreamed that you were the one who hit someone or hit someone with an umbrella on the head, it means that you see someone’s mistake or mistakes and point out to that person where he made a mistake, but he simply persistently pushes on his own.

You are now in a situation to simply take your hands off her if she continues to push on her own.

If you have been dreaming of a flower Umbrella, it means that you simply feel very happy in this period in which you are currently – everything is great, and it will remain in the same tone for some time in the future.

Everything goes well for you and just as you imagined, or even better.

You are full of positive energy, and you simply radiate it and attract happiness into yourself and other people’s lives.

Take advantage of this period in all aspects of your life, and you will not regret it – you can only expand blessings that have been given to you.

To dream that lightning strikes an umbrella could mean that you will need reliable information to solve a current problem.

But if, after the lightning struck your Umbrella, you continued on your way as if nothing had happened, it means that this information will bypass you for some reason.

Do not worry, dear dreamer, if you have seen an Umbrella, everything is great, and it will remain, and if now, you have protection.