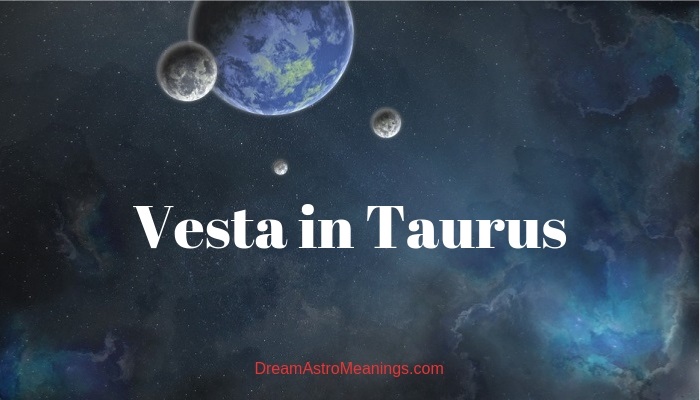 Vesta is an asteroid, discovered in 1807. It is the fourth discovered asteroid. Vesta has two big craters on its surface which are believed to be a result of mass collisions which occurred billions of years ago. Meteorites from these collisions were found on Earth.

This asteroid bears the name of the goddess Vesta, a goddess from the ancient Roman pantheon of gods. Vesta was the goddess of fertility, family, and home, and she was also the patron deity of Rome.

She was represented by the sacred fire which burned continuously in her temple in the Roman forum.

The people of Rome believed that the sacred fire was protecting them from harm and were worried that the goddess had abandoned them if the fire was sometimes extinguished by chance.

Vesta’s priestesses, the Vestal virgins, were in charge of keeping the fire burning. There were six of them and they performed the rituals related to Vesta, usually related to enhancing fertility and agricultural harvest.

These women were virgins, devoted to remaining as such during the period of 30 years. This role was a great honor for them, but also a great sacrifice to make.

If the Vestals mistakenly failed to perform their duties, they were punished, often severely.

Vesta had a holiday dedicated in her honor, called Vestalia. Women who couldn’t conceive prayed to Vesta for help.

Astrologically, Vesta indicates the manner we choose to confront the issues at work, or related to our devotion to someone or something, the issues related to the sacrifices we are making, or our integrity, and the issues we have because of abstaining from physical intimacy and personal relationships or because we fear them.

Vesta placed in a certain sign or a house of our natal chart shows the areas where we should focus our energy. It also shows the people and things which no longer serve our good and we should therefore get rid of them.

Vesta also reveals how we handle our physical needs and our urges, whether we choose to exhibit and satisfy them openly, or we choose to suppress them.

The asteroid Vesta also shows the areas where our attention and energy are devoted. It also indicates the areas of our life where we feel inhibited or restricted for some reason, or we feel we lack initiative or action.

Vesta also shows us where we need to make some sacrifices for someone or something, or to sacrifice something for a higher good.

This asteroid indicates our devotion to something or someone; that can be a person, or a belief, a cause, or a project, etc. Vesta could also point out the areas of our life where we experience some issues or the issues we tend to ignore or hide from others.

These areas are usually very important to us, but for some reasons we keep experiencing difficulties related to these areas.

Vesta gives us the necessary endurance and persistence to fight for our goals and keep our focus on them. It helps us overcome the issues we experience while pursuing these goals.

This asteroid is the ruler of chastity, purity, commitment, sacrifice, integrity, modesty, virginity, virtues, devotion, the control of our personal needs, etc.

Men with Vesta in Taurus are practical and go steadily towards their goals. They don’t make rash decisions and take time to consider the details.

They are passionate and have strong physical desires.

They can be prone to sacrificing their physical needs and/or their comfort for some higher cause.

They are determined and persistent and not easily discouraged by the difficulties they encounter.

These men don’t like making changes and avoid them in any way possible.

Women with Vesta in Taurus are organized and have a gift for planning things to ensure the success of their actions. They don’t leave any detail to chance.

These women (like men with this placement) are very passionate and can become stressed if their physical needs are not met.

These women hate changes and have a problem adapting to them.

They prefer the status quo which is an attitude that often blocks their progress and movement forward towards their goals.

People with Vesta in Taurus, function best when they feel secure and when they find themselves in a stable and protected environment.

They want to see their efforts materialized to be satisfied and to keep putting in action into achieving their goals.

They can be very determined and persistent when they are able to see the results of their actions.

They can be prone to ignoring and avoiding changes which could cause them to become inadaptable and insist on keeping the status quo.

They are very passionate and need to be able to fulfill their physical needs because they could easily become frustrated and stressed out. If their desires are not satisfied, they might begin ignoring their partner’s wishes. They can be very stubborn as well.

They are usually very practical and often obsessed with routines. They usually have artistic abilities. They don’t rush, and take their time to think through things before making actions.

Once they make a decision they could be unstoppable until they achieve their goals.

They are hard workers who are not easily discouraged by obstacles. They are persistent and love comfort.

People with Vesta in Taurus are precise, detailed, organized, and hate making changes.

These people love keeping things like they are because they don’t like to adapt to changed circumstances.

They have a strong need for physical intimacy and are very passionate. They love routine and are good at making plans to ensure the success of their actions.

These people don’t rush into things. They like to think thoroughly before making a decision, but once they make it, they don’t give up until their goal is achieved.

They aren’t easily discouraged by challenges and are confident in their abilities to succeed.

They are hard workers, and they are inspired by seeing the tangible results of their efforts.