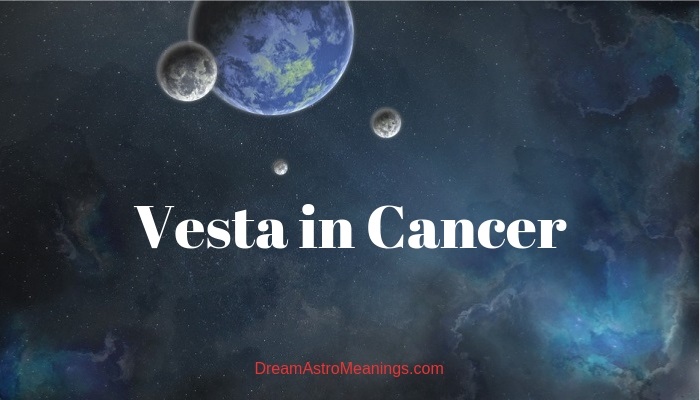 Vesta has two giant craters on its surface, and they were believed to have formed as a result of mass collisions from billions of years ago.

The pieces of the debris from these collisions were even found on the surface of Earth in the form of meteorites.

The name of this asteroid came from the name of the Roman goddess of fertility, home, and family. Vesta was also considered a protector of the Roman people. She was rarely depicted in human form.

The most common depictions of this goddess were in the form of sacred fire which burned unstoppably in her temple in the Roman forum.

The fire was considered a protector of the Romans and had to burn nonstop because the Romans believed it was a very bad omen if the fire was put out.

The role of the fire keepers was given to Vesta’s priestesses, the Vestal virgins. The Vestals were chosen by the Pontifex Maximus, the chief priest of Rome, from girls who were only six to ten years old at the time.

They had to give their consent to remain virgins in the next 30 years. If they failed to perform any of their duties, the Vestals were severely punished, by beating, and in some cases, the penalty was death.

The Vestals performed sacred rituals to enhance the agricultural harvest and fertility of women. Their role was one of honor, but it was still a great sacrifice.

Vesta was a well-respected deity, and she even had a holiday dedicated to her, called Vestalia.

In an astrological sense, the asteroid Vesta indicates the way we choose to deal with the issues we confront at work, or regarding our devotion to something or someone, as well as how we deal with the sacrifices we are making, and the issues we experience because of restraining from intimacy or personal relationships.

Vesta often reveals the psychological issues we have because we avoid intimate contacts or personal relationships or because we fear them.

Vesta demonstrates how we choose to deal with our urges, our passions and physical needs, and indicates whether we decide to openly express them or suppress them.

Vesta also indicates the areas of our devotion and shows where we need to devote ourselves to someone or something.

It also indicates our devotion to something or someone; that can be a person, a project, a cause, or a belief. It also shows the areas where we feel restricted or inhibited, as well as the ones where we lack initiative or action.

Vesta shows the areas where we need to make some sacrifices for someone or something or sacrifice something for a higher good.

This asteroid could also point out the areas of our life where we decide to ignore the issues we have. It also reveals the issues we hide from others.

These areas are usually very important, but we keep experiencing difficulties related to them.

Vesta gives us the necessary persistence and endurance to maintain our focus on the goals we have and helps us overcome the difficulties we encounter while doing that.

Men with Vesta in Cancer are sensitive and enjoy caring about the people they love.

They are very attached to their family members and they love their home. They sometimes put them before their needs and desires.

They love helping others but also need to feel appreciated. When they get disappointed by someone, they retreat and become distant.

Women with Vesta in Cancer are very emotional, sometimes overly emotional which causes issues in their relationships with other people.

These women often sacrifice for their family and need to feel appreciated for the things they do for them. They are very compassionate.

They could also be overly protective of themselves because they are afraid of getting hurt by others.

These women, like men with this placement are prone to overtake other people’s negativity because they want to help them ease their pain, but they instead get poisoned by it which makes them feel bad. They need to learn to protect themselves.

People with Vesta in Cancer are protective, overly emotional, prone to retreat and distance themselves, need a lot of attention and love, obsessive, emotionally unstable, easily receive other people’s negativity, etc.

People with Vesta in Cancer often need to feel needed to be able to put in the effort and perform their duties.

These people have a lot of compassion for their family and the people who are depending on them.

They enjoy nurturing the people who are close to them, and that fills them with energy and energy for work.

These people are overly emotional and sensitive.

They are often afraid of being hurt by others which causes them to retreat to protect themselves even when there wasn’t a real danger.

They cannot relax and enjoy intimacy with their partner if they don’t feel loved enough or pampered enough. If they allow their emotions to overwhelm them they could become very insecure and even become obsessed which can destroy their relationship.

These people need to work on their emotional stability.

They enjoy serving others and have a giving nature. They like to feel appreciated and they feel that they lack appreciation they might withdraw and become distant.

These people are very attached to their home and family, and feel responsible for their proper functioning.

They might be prone to put the duties towards their home and family in the first place, neglecting their own needs and desires. They don’t mind making that sacrifice because they care so much about them.

People with Vesta in Cancer can be very intuitive, and are very compassionate.

They often overtake other people’s pain to ease their sufferings, and risk becoming overwhelmed with negativity they have taken from others.

These people need to learn to protect themselves from other people’s negative energy and learn the safe way to help them without jeopardizing themselves.

People with Vesta in Cancer are willing to help and are very attached to their home and family.

They often fill themselves with other people’s negative energy because they want to help them by overtaking their pain and easing their sufferings.

They need to learn to protect themselves from the negativity of other people.

They enjoy helping others but desire to be appreciated for their efforts.