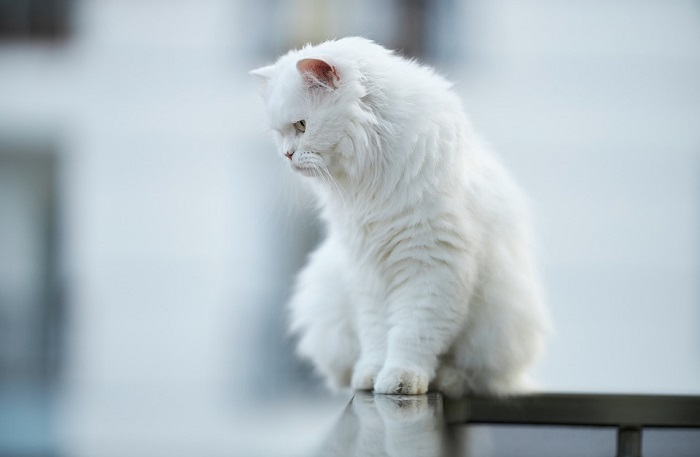 Did you ever have such a dream? You have for sure, and there is no doubt about it.

There are numerous versions of these dreams, and in general, cats are, in a metaphorical way, seen as a powerful symbol.

For some, they are symbols of good, power, and above all spiritual beings, and for others, they are seen as evil and bearers of bad luck.

They are also most commonly connected to superstition, especially when the black cat is in question.

And the question that we want to examine today is the appearance of the white cat, with the primary idea – is the white cat in opposition to the black one.

So when she crosses your path, you will be followed by luck?

Even deeper, if we walk into the most symbolic worlds of all, the dream world, is the white cat that positive sign?

Well, it all depends on how you have a dream of it… all details must be taken into consideration.

Some say that the white cat is an unfortunate sign that portends failure or misfortune. An aggressive white animal personifies enemies who confuse you and rejoice in your losses.

In a dream, if you get rid of it, you will effortlessly solve all your problems in life.

This is just one interpretation of a dream about the white cat, and there are many more.

If in a dream you just get to see a white cat, the symbolical value of the dream is not very positive, in the sense that such a dream rarely promises anything positive in real life.

In reality, such a dream announces that there is a major risk of being embarrassed in a shameful or criminal situation.

So, think of your actions before you do anything stupid. It is easy sometimes to be so spontaneous and wild, but in time, you must learn from all mistakes and failures you have made. Staying too long in such a state is never wise.

Seeing two white cats, one beside another, shows an even worse situation – in reality, you will be seen as someone who is incompetent, and you will have a bigger problem on your hands.

This is because this dream shows that you are completely ignorant of your actions, and this is the worst part, not seeing the reactions of your actions. You will not feel like digging a hole with your own hands.

Solving the consequences of problems will take a long time, so is it not better to think before you act so that you do not fall into troubles like this one, from which you cannot get out.

If in a dream you see yourself cuddling with the white cat, such a dream shows that you have a big problem with aggression that you show off constantly.

If the cat in your dream is disturbed and wants to move out of your hands, such a dream shows that you must calm down and relax.

Do anything that makes you feel good so that you do not hurt anyone who is close to you and who is innocent. This is the dream that comes to you as a warning sign to deal with aggression, and the worst thing that you can do right now is not to admit that you have a problem.

Relax and be prepared to walk or lose some of those negative minds. Here, it is not the matter of aggression itself but the cause of it. The stability you see now is very deceptive – you think peace is before an absolute storm.

What you saw in the dream as a white cat in your arms symbolizes a very complex and intricate relationship. This relationship is the cause of aggression that you may be feeling and cannot deal with it in a proper way.

If the white cat in your dream is pure white, fluffy, and adorable, such a dream is a clear depiction of the cute and loving person from your environment who is the cause of your aggressive behavior.

The most important thing that you should learn from the dream about the white cat is to attempt to stay away from her as long as possible.

If you are able to avoid “communicating” with a white cat, or in reality a close, cute and loving person, in that case, the problems in real life will pass you by. Sometimes it is the only and the best way to go.

Now, we must tell you that dreams that have as a main motive a white cat do not always carry a negative symbolical value. They could be seen from an entirely different perspective and give you a positive impulse if you had such a dream about the white cat.

Sometimes a pleasant dream about the white cat, in fact, can lead you to get to know the other side of the world replenish stocks of invaluable experiences and broaden your horizons. It is the way you want to go, follow the lead of this cat, and enjoy its unpredictable but intelligent ride.

It is up to where it will take you.

Decoding the dream about the white Cat

Your dreams can reflect everyday life or merely a consequence of what you see, so the interpretation of dreams cannot be taken literally. It can, however, be a “silent” warning to the surroundings. There are numerous cat lovers in this world, and there are so many people who cannot imagine a home without a cat who adore them for all of their traits and interesting looks.

But also there are some others who don’t like to see these intelligent but sneaky creatures anywhere near. Is the question are these two groups of people have different meanings of cats?

The meaning of the cat as the motive in a dream appears is conditioned by your genuine attitude towards the stubborn furry friend. It is believed by some that the white cat is a symbol of hostile attack, difficulty, trouble, and confusion. As you know, the appearance of the white cat alters the meaning of a dream.

For example, if the white cat in a dream is skinny or sick; such a dream does not carry a good meaning. This dream brings, in reality, news of the subsequent illness of a relative or friend. Be prepared for such an event so that you can provide support to that person instead of panic.

If, in a version of a dream, you scare a white cat of such, bad appearance, then the meaning of this dream takes a different turn. In this case, it is expected that the person who may be sick will get better.

Sometimes dreams about the white cat that is near your feet show your fears that you may have more than one, and your daily life suffers because of it. These dreams then come to you to show you not to be scared but to let things float. Don’t be afraid of everything. It is sufficient that the precautionary rules are observed within reasonable limits.

Seeing a black cat or some other black animal that is transforming into a white cat is a sign of hope. This dream shows that you’ve been hoping for the most lately may not work out. But, before this problem, you have enough time to fix it, and this is a piece of good news.

One piece of advice that you can take out of this dream is to try to correct the course of events with thoughts’ flow.

Try to imagine the white cat you’ve been dreaming of, and try to solve the problem that has developed in your sleep with the power of thought. Think positively. Think of the solution, not the problem itself.

Cats are a ubiquitous dream symbol, and the most common, in the majority of cases, are the symbols of strength, female sexuality, and creativity in dreams. It can represent happiness or even misfortune.

Much depends on whether you are a cat lover or not. What is your attitude towards them and your experience with them?

Cats can represent femininity, female sexuality, intuition, magic, secrecy, indifference, flexibility, independence, neatness, curiosity, and detachment. A wide range of meanings could be added to something related to a particular type of animal or even to a real-life cat, you know.

The white cat in a dream that is kind and loving can also symbolize the insidiousness of someone close to you and his revenge on you. Think about who would want to harm you or. He may be jealous of you.

The white color of the cat that appears in your dream symbolizes a difficult period in which you are and for which it doesn’t need to end soon.

In this case, the white cat can show a part of your personality and a reflection of the behavior or trait you associate with cats – if they are intelligent, you see yourself as one intelligent person, if you see them as cunning, you see, in fact, yourself as a very cunning person, and so on.

It can also personify someone you think has the same characteristics and habits, but it primarily acts like someone with the same name or nickname if the animal is familiar to you.

In the end, if the dream about the white cat was nice, even if you do not like cats in reality, for example, if in a dream the domesticated white cat was seen, and then it can represent love, friendship, camaraderie, and a warm family.

It can also be a friend or family member, and depending on how you dreamed about it and it can predict what can possibly happen to someone close to you.

On the contrary, if the white cat was seen in a dream as a wild, untamed, and ferocious animal, such a dream points to an overlooked talent that should be recognized, developed, and upgraded.

It is hidden somewhere inside of you, but for some reason, it was not seen in its true form.

Another possible explanation of this dream says the opposite: your surroundings have been too lenient and patiently tolerating your occasional whimsy behavior that has caused problems.

Even more, some of your character traits go overboard and go wild, that you become too aggressive and unbearable for those who are close to you.

In this case, the dream about the white cat comes to warn you that you will have to put this entire behind and tame yourself.

In other words – you will have to domesticate your wildness – and do not worry, and you will not lose anything from your character. You will become even better.