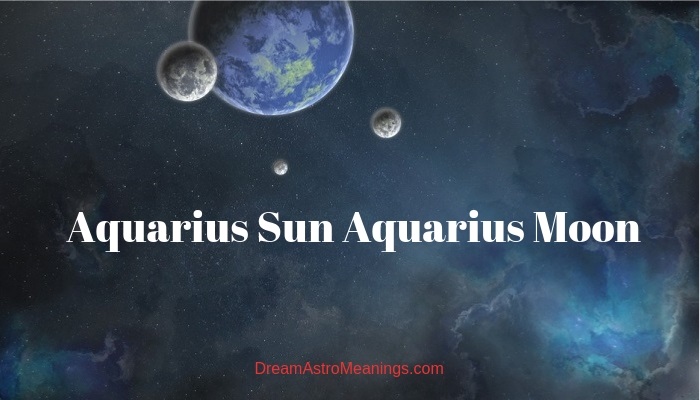 The sun sign in our natal chart reveals our outer personality, which is the part of our character we don’t have a problem revealing to the people from our surroundings.

On the other side, our moon sign describes the content of our inner being and the continent of our subconscious mind.

The traits of our moon sign are usually not something we are willing to share with people we don’t trust or consider close. Instead, we keep these characteristics to ourselves or we share them with the people we care about.

People with both their sun and moon in the sign of Aquarius can often appear as if they are not from this planet.

The ruling planet of both their sun and moon is Uranus. This planet gives these people a great dose of eccentricity and unpredictability.

These people are not easy to understand mostly because they’re so different from the majority of people. They have unique views and ideas and are usually way ahead of their time.

Because of that, they are often choosing professions where they can express their ingenuity and intelligence to the fullest. People with this sun/moon combination are often inventors and pioneers of changes.

These people are usually interpersonal beings. They are usually not very emotional and often cannot establish close personal relationships with others easily.

These people are often focused on Society and its issues. They are often occupied with pursuing some great humanitarian goal that will benefit humanity. They are usually selfless and enjoy helping others without asking anything in return.

These people often follow their own vision of a greater future for all humanity. They’re often found in humanitarian organizations and some of them even devote their entire lives to pursuing some great humanitarian cause.

These people are usually not materialists and usually don’t care much about money. They consider money a necessity without which they cannot normally functions, but money usually doesn’t motivate their actions.

Regardless of their attitude towards money, these people often manage to establish a financial security through their ingenious inventions.

Many of them don’t have the proper ability to take care of their finances, often ending up spending recklessly and jeopardizing their financial stability.

These people are both sociable and loners in nature. They usually enjoy meeting new people and learning new things and facts about different cultures. They love adventures and are often into extreme sports. These people are usually excited by all kinds of extreme activities.

These people are often police officers, firemen, or do   some other similar jobs.

They have a friendly attitude towards people and usually don’t have a problem approaching others. They might be prone to imposing their opinion to people and showing a lack of flexibility in relationships with others.

They might be prone to believing they’re always right and making others believe that. They might also have a problem with admitting their mistakes and apologizing to others.

These people often have an incredible talent for solving problems and they always seem to somehow come up with genius solutions to various issues.

People often ask them for advice when they have some issues they’re dealing with and these people are usually happy to help them.

– unpredictable, reckless, irrational, have a problem apologizing and admitting their mistakes, prone to imposing their opinions on others, inflexible, unfaithful, extreme, eccentric, not good with money, prone to financially jeopardize themselves, interpersonal, not very emotional, detached, not family or relationship types, etc.

People with their sun and moon in Aquarius are a bit eccentric and are not very easy to be in a relationship with.

These people are usually open two new acquaintances and can easily approach the people they’re interested in. Their approach is usually friendly and people often cannot be sure about their true intentions towards them.

These people want to keep their freedom and independence even when they’re in the committed relationship or marriage, and that is a number one priority for them.

They don’t like being pressured into doing things they don’t want and especially don’t want their partners controlling them and telling them what to do.

They want to have freedom to do whatever they want and go wherever they want, without the need to inform their partners about everything.

These people I’m not very emotional and they usually have an intellectual approach to their relationships. They are attracted to intelligent partners who can stimulate their intellect and motivate them to expand their knowledge and improve their personality.

If a person doesn’t have anything intelligent and interesting to say, these people usually bypass them, even in situations when they happen to be very physically attractive.

Physical Attraction and physical attractiveness is not a high priority for these people when it comes to choosing a relationship or marriage partner. They are attracted to quick-witted and interesting people who can steer their imagination and inspire them.

When they see someone they consider interesting it is usually not very difficult for them to approach that person and openly speak their intentions. They can have unpredictable reactions and their partners often don’t know what to expect next.

They’re not very passionate, although there are some who are, usually the ones with strong fire or Scorpio influence in their natal charts.

These people are not very romantic either and usually have an adventurous nature. They are attracted to people who are also adventurous in nature. They enjoy doing fun things together with their partners.

In many cases, these people don’t want to have children because they consider them an obstacle to their freedom.

It is not that these people don’t like children; it is just that they consider their lifestyle not suitable enough for the role of parents.

These people are very honest and they usually tell their partners their relationship preferences and they usually don’t want to give their potential partners false hopes about things that they are not ready to fulfill.

In general, they are an excellent partner for someone who is easy-going and prefers a relaxed relationship without too much commitment.

Especially with bad aspects of their sun and moon, these people might be prone to sudden endings of their relationships and marriages, quarrels, arguments, and severe conflicts. They can also be prone to attracting partners who provoke such situations.

They might also be prone to making irrational relationship decisions, sudden beginnings of relationships as well as sudden endings, without considering the possible consequences of their actions. They might be prone to getting married more than once.

These people are interesting in the role of parents and they tend to give their children a lot of freedom to develop their own individuality and support the development of their talents and abilities.

They don’t have strict expectations from their children and they often can leave them to build their personalities on their own.

The best match for an Aquarius with their moon in Aquarius is another air sign, or fire sign with a lot of air element in their natal charts.

These people are not a good match for a water or earth sign because of their opposite nature.

Of course, a water or earth sign with a lot of air element in their natal chart, could have sufficient amount of understanding for their eccentric and unpredictable nature.

People with their sun and moon in Aquarius are unpredictable and often have irrational behavior which surprises people.

They are often focused on the wellbeing of the Society and can be impersonal in their relationships with other people.

These people are not very emotional either. They have an intellectual approach in their relationships and they often don’t want to get attached in a relationship.

Because of that, these people prefer open type relationships and they prefer partners who will be ok with the idea of having the freedom to explore further beyond their relationship with their partners or spouses.

These people are often humanitarians in nature who are often focused on achieving some higher goal of helping humanity and the planet in some way. Many of these people devote their entire lives to fulfilling of such a goal.

Their way of life and many interests and activities that they have are often the cause why this people decide not to have children having in mind the fact that they don’t have enough time to devote themselves completely to the role of a parent.

In general, these people have gentle and kind souls and are always prepared to help others, but are not an excellent relationship or marriage material.

They are a good match to partners who have similar preferences in their love life.