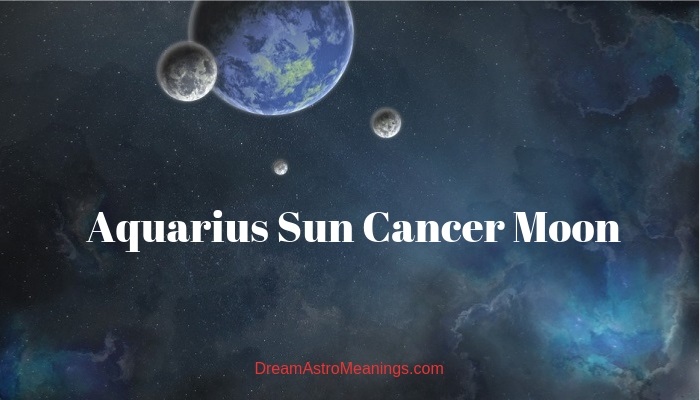 Our sun sign and our moon sign are the placements which most of all describe our personality and our character.

People with sun in Aquarius and moon in Cancer have a personality which is a combination of air and water element, which gives this people a balanced dose of emotions and intellect.

These people are usually open and easily communicate with others, but at the same time are very emotional and can form strong emotional bonds with people they choose to become close with.

Aquarius people are adventurists and have inquisitive natures. They are inventors and usually very intelligent.

With their moon in Cancer, these people are more emotional and sensitive than an average Aquarius, and they can be prone to irrational and unpredictable outbursts off moodiness, anger, accusing others, periods of silence, retreat and other similar behavior.

These people are not as reckless as a typical Aquarius because their moon in Cancer gives them a dose of stability and rational approach towards everyday situations.

These people know their way with money; they know how to earn it and usually know how to keep it. Unlike typical Aquarius people, these people carefully plan how they will invest their money and they usually manage to establish a substantial financial stability for the future.

They are often interested in the latest technologies and often establish a career in the field of it telecommunications and other similar areas. These people are also very creative and are often talented artists which choose the modern arts as their dominant area of creation.

These people can be very unpredictable and have surprising reactions, which can often be perceived as eccentric by the people from their surroundings. They need to control their emotions and their sensitivity because they can easily be hurt by other people’s remarks and actions.

They can be prone to perceive other people’s intentions as malevolent or in some other way intrusive to their persona, but in many cases they create these stories in their minds, when in reality, these people have nothing against them.

They can be very selfish and self-consumed by their own needs and by their own issues, and can be prone to bother people, especially their loved ones with their problems and their issues, while on the other hand they are not prepared or willing to listen to other people’s problems and needs.

These people can be prone to sudden mood changes, which is, something that people who are close to them need to get used to and accept as a part of their personality. In most cases, these mood swings don’t last long, and they are back to their normal selves.

These people are usually kind and helpful beings and enjoy helping others.

They are often in pursuit of some big humanitarian goal and many of them devote their entire lives to pursuing that goal. They enjoy helping people and they’re very hospitable.

These people have a combined love for adventure and their home; they are both home types and adventurous types. They love exploring the world and gaining new experiences, but they also, enjoy coming home and spending time there.

Because they love the feeling of security they usually focus on finding ways to earn money and increase their income, and they’re usually successful at investing their own money.

They have a great ability to recognize a good opportunity for investing, which is what provides them with secure income in the years to come.

These people enjoy saving money and they detest spending it on useless items. They are not very ambitious, but they have goals they desire to and they’re persistent enough in pursuing them and reaching them in the end.

The good traits of Sun in Aquarius and Moon in Cancer:

The good traits of Sun in Aquarius and Moon in Cancer:

People with sun in Aquarius and moon in Cancer are emotional beings, but usually have an adventurous approach to their relationships.

They are in pursuit of partners who will give them enough adrenaline boosts and satisfy their need for new experiences.

They are attracted to partners who also have an adventurous nature, and are in pursuit of new experiences and gaining knowledge about different cultures and people.

When they are attracted to someone’s way of thinking and someone’s great knowledge about various subjects these people often begin relaxing and allowing themselves to develop feelings for them.

Although they are open in their approach to people and they don’t have a problem approaching the people they like and feel attracted to, these people have a problem in relaxing and showing their emotions and they do that only when enough time has passed and they have gained trust and gotten to know the person.

They have a friendly approach to people and their potential partners often cannot be sure about their intentions towards them.

Often a lot of time passes before these people decide to admit how they feel towards some person and in some cases that surprises the person itself because they didn’t expect such a reaction according to their previous behavior towards them.

Unlike typical Aquarius people, these people are much attached to their families and love spending time with them. They also desire to have their own family. They love children and usually have them and try to devote as much of their time to being a great parent.

They are excellent parents who give enough freedom to their children to evolve and develop their uniqueness, at the same time watching over them and making sure nothing bad happens to them.

At times, these people can be overprotective, but in general, they try to give their children the freedom to develop on their own.

One of their main issues in their relationships is their enormous need for freedom and independence, which is why they often have a problem when they need to decide whether to commit to a person or not.

This type of Aquarius person is more likely to commit and marry then some other Aquarius people, but even these people have the need to keep a part of their freedom and independence when they’re in a committed relationship or marriage.

That is something their partners need to be aware of and need to tolerate if they want to maintain a stable and harmonious relationship with them.

Another thing that their partners need to be aware of and accept is their tendency towards unpredictable behavior and mood changes, which fortunately don’t last long.

Their ideal partner is someone who is emotional and sensitive, but also has an adventurous spirit and enjoys exploring new things.

They are both outdoor types and home types and they enjoy spending their time with their partners, both having adventures together and returning back home and spending time there together.

These people have a welcoming nature and enjoy making their loved ones happy. They enjoy preparing food for them and protecting them.

They are not very open to the people from their surroundings and usually focus their attention to a close circle of friends and their family members.

Possibly the best match for a person with sun in Aquarius and moon in Cancer is another air or fire sign with water element in their natal chart.

They can also get along well with an earth sign, providing that the person has tolerant character and accepts their need for independence and freedom in a relationship or marriage.

People with moon in Cancer and sun in Aquarius are open and relaxed, but at the same time they were emotional.

These people easily approach and establish contacts with people for superficial relationships, but they need time to get to know someone before developing their emotions for that person and establishing a serious commitment with them.

These people can have unpredictable reactions and can be a bit irrational, but they have kind and gentle beings. They enjoy helping others and they’re born humanitarians who often devote their lives to fulfilling some important goal which will benefit humankind and the planet Earth.

They usually have children and are good parents who are tolerant enough to give their children the opportunity to develop on their own, but still maintaining their protective role and watching over them.

They are independent beings and they love their freedom very much, which is why they often desire to keep parts of their independence even when they’re in a committed relationship.

They’re very intelligent and quick-witted and they’re attracted to partners who have similar traits. Physical appearance is not something of great importance for them and they are not very passionate either.

Their partners should be smart and emotional. They enjoy spending time with their partners both outdoors as well as in their home.

Aquarius people are known as unpredictable and reckless, but with their moon in Cancer, these traits are diminished.

They especially have a rational approach when comes to earning and spending money. They tend to think well before spending their money, and enjoy saving it.

They also make wise decisions on how to invest it. They have a talent for choosing the right opportunities to invest their money and increase their income.

Financial security is very important to them and that is why they’re putting up a lot of effort into providing it for themselves as well as for their families.