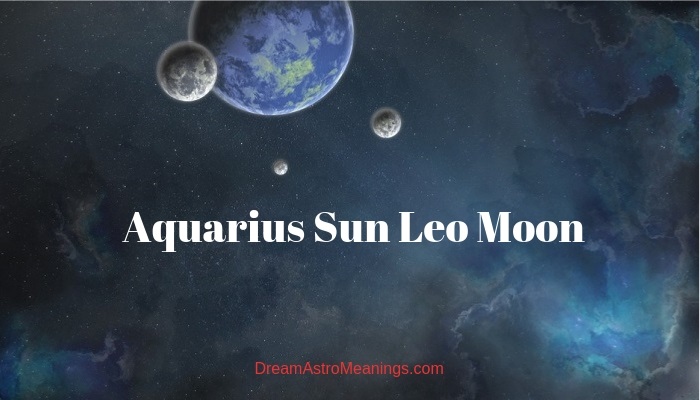 Our sun sign describes our conscious side of nature and reveals how we are usually perceived by the people from our surroundings.

On the other side, our moon sign reveals the content of our subconscious and our inner being.

The moon sign traits are not visible to many people because we tend to keep them private or we share them only with the people with trust and consider close.

People with their sun in Aquarius and their moon in Leo have a character which is a combination of air and fire element. Their ruling planets are Uranus and the Sun.

The combination of these two planets and these two signs makes these people very independent, egotistical, self-consumed, arrogant, irrational, unpredictable, and possessing other similar traits.

These people are reluctant to make changes and are usually very inflexible.

They often believe, or they have a tendency to believe that they’re always right and that other people should listen to them. They, on the other hand, don’t accept other people’s advice and opinions, and they have a difficulty making compromises with others.

They often tend to behave in a “my way or the highway” way and in many cases they have a problem in communication and relationships with other people.

These people are often full of themselves and are very self-centered. They often desire to be in the center of attention and desire other people’s admiration. They have a problem admitting that they are ever wrong or that they have made a mistake.

They also never apologize to others, even when they are subconsciously aware that they have done these people wrong.

These people are very confident and can be prone to being over-confident and making irrational and thoughtless decisions and actions, which can jeopardize their security and well-being.

These people can be prone to believing that they deserve only the best and that they are better than other people.

They can suffer from a superiority complex, believing that they deserve more than others in life. They can be prone to bragging and putting themselves first.

They are very intelligent and capable, but can be overly consumed with bragging, which diminishes their achievements in the eyes of other people.

These people have leadership skills and they often end up in leadership positions, but they can be prone to irrational and thoughtless decisions and a bit tyrannical attitude towards their subordinates.

They love quality and expensive things and they can be prone to recklessly spending their money on luxury items and things they don’t really need, buying them just to show off.

Their desire to have the best and the most expensive things might bring them to jeopardize their financial security.

These people usually have good luck when it comes to earning money and they are able to earn substantial amounts to provide for their future financial security.

If they manage to control their spending and manage their finances in a proper way, they should be able to ensure the lifestyle they desire, which is a lifestyle of comfort and luxury.

They can be considered irritating by other people because they’re overly concerned with themselves and their importance. They can be prone to imposing their opinions on other people and be very intolerant towards their desires and rights.

These people usually have an adventurous nature that leads them to dangerous situations with which they can jeopardize their lives. They are often into extreme sports and all kinds of extreme activities.

If they have bad aspects of their sun and moon, these people can be prone the conflicting behavior or attracting people which could bring such situations into their lives.

Although they can be considered selfish by many people, these people usually sincerely enjoy helping others and they do it selflessly without expecting anything in return.

They enjoy helping others both with their services and financially and some of them are even prone to giving money to people who ask them, without expecting to be paid back.

The good traits of Sun in Aquarius and Moon in Leo:

The bad traits of Sun in Aquarius and Moon in Leo:

– egotistical, prone to bragging and showing off, need to be in the center of attention, prone to extreme sports and activities, self-centered, full of themselves, over-confident, arrogant, etc.

When it comes to relationships, people with Aquarius sun and Leo moon can experience different issues due to their character. These people might be overly demanding towards their partners, trying to impose their opinions on them and behaving in a controlling manner.

Their intolerance towards their partners’ opinion and refusing to make agreements with them are often the cause for endings and breakups of their relationships and marriages.

These people often have multiple marriages and divorces. These people are very passionate and usually very attractive. They have an unusual and unpredictable nature which is often attractive at first glance to their potential partners.

Later, they realize that these people have a difficult and inflexible nature, and that they are not willing to compromise.

They find out that these traits are something they need to get used to and accept because it’s not likely to be changed. Their partners also have difficulties to accept their bragging nature and their self-centeredness.

They are emotional, but usually in a possessive way. They often have a desire to control their partners and tell them what to do, which is why, people who are confident and desire the right for their own opinion cannot get along well with this people; that is one of the main reasons why these people often end up in relationships with people who have weaker characters then they do and are able to accept their guidance without a problem.

These people usually have the need to be admired by their partners and people in general.

They love children and usually desire to have a family of their own. They can be prone to spoiling their children with many gifts. They consider that their children deserve only the best, which is also part of their need to show off to others.

When they find a partner who is a suitable match to their needs, and accepts and tolerates their character, these people are able to maintain a stable and lasting relationship and marriage.

If their sun and moon have bad aspects with planet such as Mars, Saturn, Uranus and Pluto, they might be prone to attracting conflicting partners and conflicting relationship situations in their lives, which later become the cause for breakups and divorces.

These people usually seek partners with adventurous spirit and partners who are good-looking. They often want to be proud of their partners and they want to brag with them to others as if they are their possession.

They want someone to whom they will be physically attracted to as well as someone who will be intellectually stimulating to them at the same time.

Their partners need to be intelligent and able to keep their interest for a long time.

The best match for an Aquarius with moon in Leo is possibly a combination of air and fire sign. Possibly the best partner for them is Libra.

They could also get along well with Pisces partners, providing they have some air or fire in their birth charts. Aquarius is also a good match for this people.

Their partner needs to be someone who has a tolerant nature and wouldn’t mind tolerating their often egotistical and over-imposing behaviour.

People with moon in Leo and sun in Aquarius can be very self-centered and egotistical.

These people might have a conviction that they are always right and try to persuade others in their opinion, at the same time, refusing to accept and acknowledge other people’s opinions, and trying to control their actions and thoughts.

These people can often suffer from a superiority complex, believing they are better than others and that they deserve better things and better treatment in life.

Their conviction in their qualities and belief that they deserve all the success and good things in life, often leads them to situations where they manage to accomplish their goals.

These people love money and love the comfort money provides. They love luxury items and often spend a lot to provide them.

They usually don’t know how to handle money and often make reckless decisions and jeopardize their financial security. They need to control their spending habits and need to manage their finances better.

Their need to be listened to and admired, often brings them in relationships with partners who have weaker personalities then then do.

These people don’t have a problem committing and if they find a partner who is willing to put up with their strong dominant nature and their need to always be in the centre of attention, they can establish long-lasting union with them.

They love children and often tend to spoil their children with presents. Part of the reason is there need and tenancy to show off.