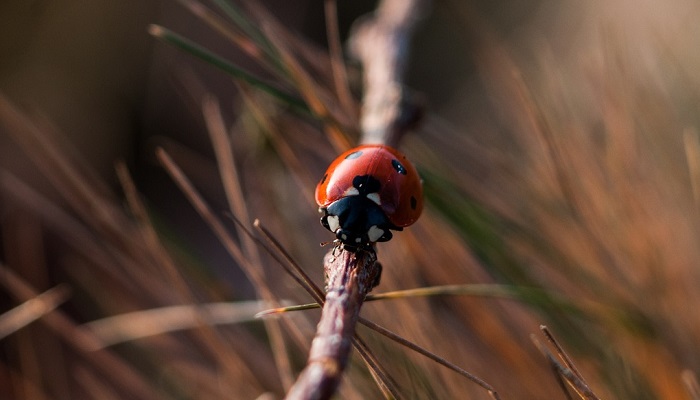 Who does not cheer up if a tiny ladybug lands on their hand or shoulder? Why people think of ladybugs as lucky charms?

We are about to enter the wonderful world of insects’ symbolism and figure out why are ladybugs considered good luck and, if there are other opinions, why they are not. Ladybugs are, indeed, some of the most favorite insects on our planet.

Generally, people are not that fond of bugs; they are too different from us, some of them could be really nasty, dangerous or simply annoying.

However, there are many colorful and interesting species that appear almost unimaginable to humans. There are various rare bugs living in some far corners of the world, considered strange and exotic.

There are others that live close to us, everyday insects, to say so, and, amongst them, there are some worth of our praise, admiration and love. Take butterflies or dragonflies, for example.

Scarabs, crickets and grasshoppers are also good examples. Ladybugs are associated with many positive ideas and meanings.

It has always been especially a good omen if a ladybug lands on your hand.

Before we analyze interesting and rich symbolism of this tiny spotted bug, let us find out something more about the species itself.

Ladybugs are primarily known by that name in North America, while British call them ‘ladybirds’. These small beetles are classified under their Latin name Coccinellidae. 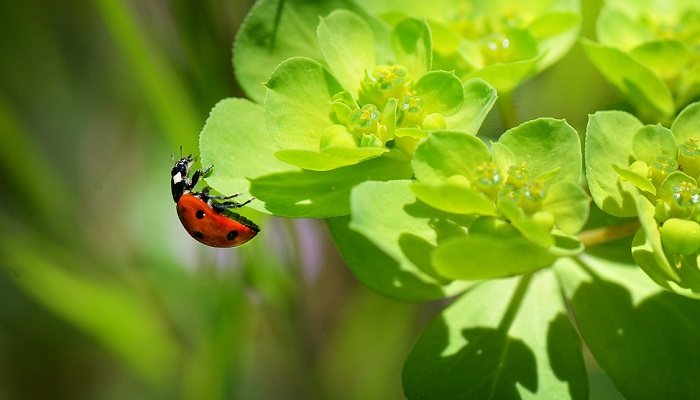 Coccinellidae are best known for their red and black spotted wings. Latin term coccineus literally means scarlet. However, there are other members of the family that are not red.

Etymologists prefer to call them ‘lady beetles’ or ‘ladybird beetles’. Interestingly, these charming insects are, in fact, not classified as true bugs. True bugs would mean that they belong to a widespread order of insects, Heteroptera, which they do not.

Ladybugs are considered beetles, not bugs, although people commonly call them bugs. Coccinellidae are best known as ladybugs or ladybirds. The name ladybird originates from Britain’s Our Lady’s Bird.

If you look at old masterpieces portraying Mary, the mother of Jesus or Our Lady, as she is called, you would notice she usually wears a red cloak with seven spots of the most common European specie of Coccinellidae family.

The name ‘ladybird’ has been adapted in America and transformed into ‘ladybug’. There are other interesting examples of the name in European languages, such as German Marienkäfer, which is literally translated as ‘marybeetle’; the meaning remains the same.

These associations with Holy Mary tell a lot about origins of the ladybug positive symbolism widespread around the world.

Ladybugs are beetles or Coleoptera. These are insects with hard shielded wings; although they do have possibility to fly, they are not particularly skillful. Fully grown up ladybugs do fly, but only for short distances; they are quite clumsy in that skill.

Below ladybugs’ hard outer red and black wings there is a pair of soft, transparent ones. Ladybugs have little oval bodies, small head and short legs.

You could easily recognize a ladybug by its characteristic red and black body. Common ladybugs have hard, shiny red wings with distinctive red spots.

However, they could also be orange or yellow with black spots, as well as black with orange or red spots. There are also one-colored ladybugs, but we fail to recognize them as members of the family.

Vibrant colors of ladybugs are meant to keep predators away; predator animals and insects associate vivid colors with venomous species, so they see to avoid them.

Ladybugs are indeed venomous, but only for very small predators; they are completely non-harmful to us. In fact, people love them, especially farmers.

Their incredible potentials have been recognized long time ago.

Nevertheless, a red one has become a recognizable symbol, a true representative of its order. A red lovely ladybug with black spots has long become known as a lucky beetle. It is present in art, literature, popular culture and so on.

You could commonly see it in children picture books, coloring books, in cartoons, comics, as brand logo and so on. Ladybugs are a common motif in art and jewelry making, as well.

These colorful and adorable beetles are particularly active over daytime and not only they look cute, but they are incredibly useful species; that is another reason for us to love them.

An interesting fact on that is that ladybugs commonly lay eggs in the middle of colonies of those pest insects; they want to be sure their little ones to have an instant food source.

We could even dare to say that they are a sort of ‘fast food’ for little ladybugs.  While such insects are not that harmful by nature, their numbers is what worries most of people in agricultural sphere.

Ladybugs help reducing their numbers and thus saving our crops and food.

Did you know that a ladybug is capable of having an amount of food that is one hundred and twenty times heavier than its own weight?

That is an impressive amount for such a tiny and gentle little beetle. Ladybugs are truly amazing species. They mate in spring and can lay from several to hundreds of eggs.

In a week, these eggs turn into larvae of bluish color, than transform into cocoons from which little ladybugs are born. Ladybugs’ lifespan extends to about a month.

Ladybugs enter winter hibernation. They gather in smaller groups and tuck together to keep themselves warm enough. Their bodes contain some glycerin that keeps ladybugs’ bodies from freezing to death.

What is more interesting about this ladybugs’ winter sleep us that every following generation of these beetles would see to over winter at the same place.

We could say ladybugs are quite homebound. They are widespread around our planet.

Ladybugs could be found in all areas of the world, from the coldest corners of the world to warm parts. They are officially protected species.

However, people are generally unlikely to kill a charming ladybug.

Many beliefs prevent us from doing so; in a addition, ladybugs are lovely and very useful.

There are numerous ladybug legends and folktales. Perhaps one of the most popular is the one about the lovely beetle’s name; variations of the story we told you about Holy Mary. The most enduring one tells about farmers who prayed to Holy Mary to save their crops from devastating insects.

According to the tale, Virgin Mary sent ladybugs and they soon destroyed all the pest insects.

Since that day, these lovely spotted beetles have been known as Our Lady’s beetles, ladybirds, ladybugs etc. Almost all the legends tell about ladybugs as lucky and fortunate beetles.

All around the world there is a widespread and strong belief that if you kill a ladybug, you will call upon yourself bad luck and misfortune. These superstitions and folk beliefs only slightly vary.

French people believe that ladybugs can take away all pains and ailments one has; if it lands on you and then fly away, it is considered that it took your ailments away.

Another superstition says that if you catch one and make whish holding it in your hands, the direction in which the beetle flies away after you release it shows you the source of your future luck!

An interesting agricultural superstition is related to ladybugs’ spots. Farmers believe that if you see a ladybug decorated with more than common seven, the year will not be good. It is considered a bad omen and a sign of famine and misfortune.

If there are less than seven spots, then it is a positive omen for good harvest and abundance.

Belgians believe that a ladybug can tell if a young woman is about to get married. According to local beliefs, if a beetle lands on a girl’s hand, it means she would most likely be married in a course of a year.

Swiss have an interesting variation of the popular saying related to childbirth. Instead of telling their young ones strokes brought them, they say ladybugs did that.

Ladybugs are also present in Asian countries’ folklore. In some of Asian belief systems, it is said that ladybugs have special powers and that they are capable of understanding our languages.

They are believed to be blessed by divine forces. In Breton lore, ladybugs are heralds of pleasant days and good weather.

Victorians have had some really strange beliefs. According to their beliefs, a ladybug landed on your hand is a sign that you are about to get new beautiful gloves! If it land on your head, then you will get a fancy new hat!

Nineteen century was a truly awkward one. There was a superstition about healing power of mashed ladybugs; according to this medical myth, such a medicine was an efficient cure for toothache.

An old superstition say that spots on a ladybug’s back tell about the number of dollars you are about to find. Pioneers of the New World believed that finding a ladybug during winter is an especially fortunate sign.

Well, we think it is pretty obvious that ladybugs are one of the most positive animal, or insect spirits, in the world. They are favored and loved by many different cultures. All the folktales and superstitions almost unanimously claim these lovely beetles bring good luck and fortune to those who see them.

Moreover, it is even better if a ladybug lands on you. Who knows, maybe you will find some money or receive a fancy pair of gloves?

Ladybugs are indeed charming little ones. In addition, they are of actual use to people. In modern days, farmers even get ladybugs to clear their crops from damaging insects.

Ladybugs are associated mostly with positive ideas and concepts and they look so charming, so they are hard to resist to. Ladybugs are, perhaps, one of the rare species people are not afraid of or disgusted.

Next time you see a ladybug, consider yourself fortunate. Do not harm or kill it! If it were in your home and you would like to take it out, handle it gently and let it fly away.

If you are especially in love with beautiful and lucky ladybugs, we suggest you get yourself small items resembling these charming beetles.

A piece of jewelry for ladies, a home decoration object, a toy for kids, a picture or whatsoever.

Ladybugs are never omen of bad things. They are heralds of good, pleasant days and joyful moments. They cheer up anyone; just look at their shiny round bodies, adorned with beautiful scarlet and black spotted wings! Ladybugs are loved all around the world.

To end this lucky story, we enlist some of the names these beetles are known by in different countries.

Paskalitsa is Greek name for ladybugs, coccicinelle is their French name. They are known as mudangbule in Korea, mara in Latvia, mariquita in Spain. Hungarians call it katicabogár, Finnish leppäkerttu.