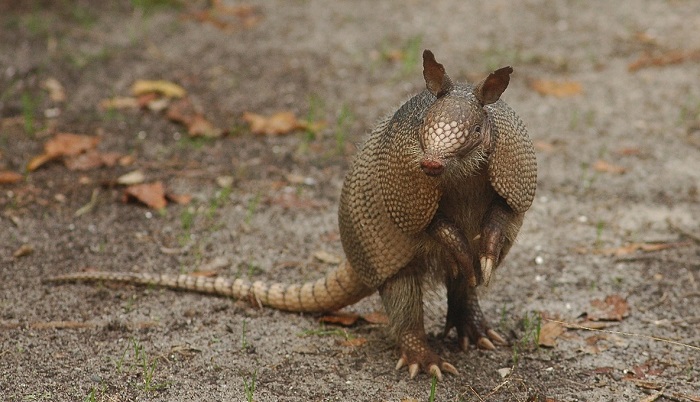 Armadillos are a family of strange, armored mammals from Americas.

All of twenty-one species of armadillos inhabit American continent; they could not be found anywhere else in the world, in the wild.

Armadillos are probably one of the strangest and the most interesting species on earth.

They are known as those with the armor, which is literate translation of Spanish armadillo.

In local languages, particularly, Aztec and Nahuatl, armadillos are better known as turtle-rabbits, which is easily understood if you observe armadillos more closely, noticing their long ears and, of course, their rounded armor.

However, not all armadillos appear exactly the same, although they all belong to Dasypododae family, the only remaining one.

These twenty-one species are divided in nine genera and they vary in size and in appearance and number of their armor rows.

Although we cannot say armadillos are particularly lovely creatures, we could certainly find them incredibly interesting.

They are some of the best exemplars amongst oddly beautiful beings our planet represents home to.

Armadillos are found only in Americas, so people from all other parts of the world find them extremely strange and exotic.

They are, however, planetary known for their hard armor and that is where from most of armadillo symbolism comes from.

Let us learn something more about these interesting animals and their spiritual powers. 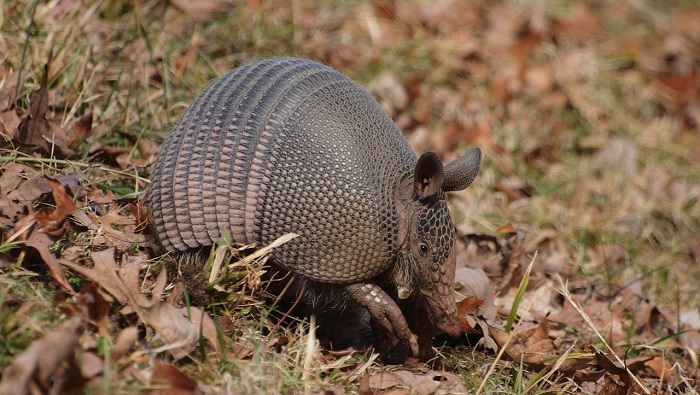 As we have mentioned, armadillos are mostly known for their strong back shields. Their natural armor makes them powerful spirit animals and their symbolic meanings do not vary much, all around the world.

However, armadillos have special significance to native peoples. Parts of armadillos’ bodies have been used by local people for various purposes, no matter of mystical and spiritual powers ascribed to these animals.

Certain cultures use armadillos’ meat for food; the taste of armadillos’ flesh is described as similar to that of common pork.

Others make instruments producing incredibly soothing music. You have surely heard about Andean flutes or enjoyed pleasant music played on them.

Varieties of armadillo species make these animals even more interesting, particularly to people who have never have the chance to see them in the wild. Armadillo species are different in size, colors and armors.

The most widely known is giant armadillo, while the smallest and the most tender one is incredibly strange pink fairy armadillo.

Particularly interesting exemplar is the three-banded armadillo, known for its ability to curl into a solid ball. This interesting fellow was a mascot for the World Cup in Brazil.

However, there are certain unpopular facts about these oddly equipped animals.

Scientific explorations and studies found armadillos are particularly prone to a nasty disease, leprosy and could be hosts and carriers of bacterial infections, because of their strange physical form.

Armadillo symbolism is based on the fact these animals have their remarkable natural armors, so it does not vary a lot.

It is truly an amazing natural feature that makes armadillos ultimate symbols of defense, self-defense, toughness, but also limitations and boundaries.

They also represent endurance, resilience, self-reliance and self-protection. They embody the idea of survival and persistence.

These armored mammals are not particularly soft and vulnerable, because of their special equipment. They are present as an artistic motif of defense and protection.

Armadillos are not known as intelligent animals, but their armors save them from harm and misfortune.

These animals represent the ability to go through the hardest of times, relying only on your own. Their specifically designed bodies make them capable of enduring severe climates and weather conditions, so they naturally represent survival.

They also represent solitude and self-reliance.

Armadillos do not require much food or water to endure hard times; they could survive on very small amounts. This fact makes them symbols of modesty and essentiality of life.

They are naturally protected from various tough conditions from their environment, including predators. While an armadillo is not that easy prey, these animals do not like to risk.

They have delicate sense and they are always on the watch, in case a hungry predator is somewhere around.

These animals are also a symbol of limitations; self-limitations, in the first place. Their armor may protect them, but it is something they cannot simply take off and put aside.

Armadillos’ armor represents inability to take off our burden; it is something you have to carry all around. In that sense, armadillos symbolize limitations we all have.

People guided by this strange animal totem are interesting individuals. These are personalities of unique taste and style.

They are quiet, reserved and commonly introverted. Armadillo people find it hard to open up to others and to let people close. They are afraid of being hurt by others or they are indifferent; it depends on individual personality, of course.

This introvert structure has its good and bad sides. Some Armadillo people use their introvert traits in order to build their own destiny on their own, not to keep others away.

These ones take the best of Armadillo totem; they are self-confident, self-reliant and have creative mind. They do not need others to tell them what and how to do.

Others are more timid personalities; they live in fear of being hurt, so they over-protect themselves and appear cold, reserved and arrogant to others. Armadillo people are, however, kind and gentle with few people they consider close.

They have very few friends and do not like large company. They are not particularly sociable and prefer to enjoy solitary life.

However, sometimes they distance themselves from the world too far, so they end up feeling lonely and sad. Try to find balance between your need for solitude and for understanding and love from others.

These people are actually very sensitive, under their mask of toughness and ignorance. The thing is, their biggest fear is to get hurt.

Because of that fear, they act overly self-defensive and build strong and high walls around.

Armadillo people love steady life and they are not easily seduced by ideas of adventurous exploits. They are not risk takers and they rarely rush into new things. Armadillo individuals love to think things through, before they start something.

When in a company of friends, Armadillo people are the ones with cool heads, the voice of reason. They are great diplomats and mediators, even being quiet and generally shy. They are good listeners and love to analyze things, before they offer you any advice.

Others can learn patience, calmness and steadiness from Armadillo people.

These people rarely show their emotions in public, but they are full of love for their closest ones. Just as they are protective of themselves, they care much about those around them.

Armadillo people are understanding and loving friends, partners, parents and so on. They are ready to do anything needed for their loved ones to be safe, comfortable and happy.

Armadillo people do not like making big changes. They are modest and are not driven by strong ambition. They are happy to have a bit more than essentials for a comfortable life.

They love coziness of their home and are not particularly adventurous. They prefer a cup of warm tea by the window over an exotic journey, for example.