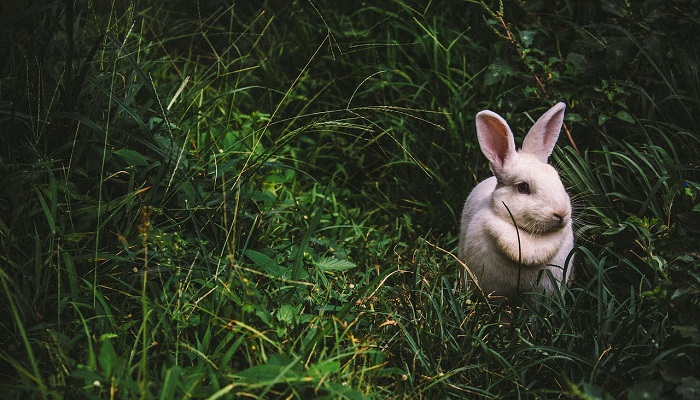 Rabbits are small mammals. Today, there are more than 300 breeds of domestic rabbits around the world. These animals are many people’s favorite pets, clothing, food, etc.

Rabbits live in different habitats, such as forests, grasslands, meadows, wetlands and desserts. They live in underground burrows. Most of the world’s population of rabbits (more than 50%) lives in North America. They also live in Europe, parts of Asia, Africa, and South America.

Rabbits breed very fast. The size of one litter is often between 4 and 12 bunnies. Their pregnancy lasts shortly, around 30 days. They reach their reproductive maturity very early. Males become reproductively mature with 7 months and females with 4 months of age. That is a lot of rabbit babies during one rabbit’s lifespan, which lasts around 8 years.

Most rabbits are very social and love being in large social groups in their burrows or in warrens. These animals have been domesticated long time ago. Since the time of the ancient Rome rabbits were kept as livestock. Their selective breeding created many breeds of rabbits. Many of them are kept as pets, and a lot of them are bred for their fur and meat.

Rabbits are distant relatives to rodents. They have large muscular hind legs, which are larger than their front limbs. Such limbs enable their unique way of motion, which is hopping. They also enable their speed.

They are fast and agile animals, and these are the traits which enable them to escape predators. They have strong nails which they use to dig the ground, but also to defend themselves.

An interesting fact about rabbits is that their teeth never stop growing. Their eyes’ position enables them a vision of almost 360 degrees. Their ears can turn 180 degrees. They have an excellent hearing and they can precisely locate sounds.

These animals are herbivores, feeding mainly on leafs and grass. They are mainly active during night, and sleep around 8 hours per day. They sleep with their eyes open, because they are alert to potential danger. Many predators prey on rabbits so they need to be constantly on the lookout for threats.

When they are captured, they try to defend themselves kicking the opponent with their strong hind legs. They also have strong front teeth which they use to bite the attacker so they could try to escape.

Rabbits are a cause of environmental problems because they breed fast and have an enormous appetite. In some countries rabbits are considered pests.

What does the Rabbit Symbolize? 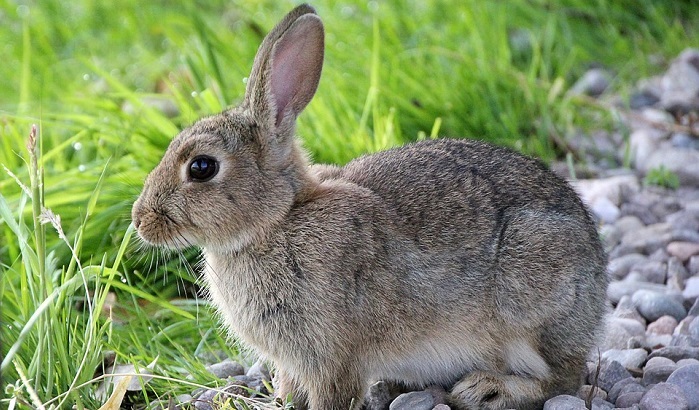 Rabbits symbolize many different things. If you heard of the term white rabbit, you must be wondering what it means. A white rabbit meaning derives its origin from the children’s story Alice’s Adventures in Wonderland, by Lewis Carol.

The white rabbit was the character in the story, that was always late, and always in a hurry. Hence, the white rabbit term is used to describe a person who is always in hurry and complaining of being late.

Talking about rabbit symbolism, we mustn’t forget about the Easter bunny. The Easter bunny origin dates back to the 13th Century in pre Christian Germany, where people still worshiped gods and goddesses. The symbol of their goddess of spring and fertility, Eostra, was a rabbit.

Also, eggs were considered a symbol of fertility since antiquity. In the 15th century, when the Roman Catholicism became the dominant religion in Germany, pagan and religious facts merged and in time, created legends, such as the legend of the Easter bunny.

In the legend, the rabbit was a judge who evaluated whether children were good or bad, and only the good ones received colored eggs in the nests they made in their hats before Easter. The Easter eggs were considered a symbol of Jesus’s resurrection.

The legend continued spreading in the United States from the 17th Century, through Protestant German immigrants in Pennsylvania, telling their children a legend of a rabbit bringing Easter eggs to children. And that is how it all started.

An image of a happy Easter bunny, a figurine, or an Easter bunny made of chocolate is now on many tables all around the World during Easter holidays.

Rabbits have many other symbolisms.

The Meanings of Rabbit as a Totem Animal

The rabbit totem animal can have so many different meanings. Here are some of them:

Fertility. Rabbits are a symbol of fertility because they breed at a very fast rate. If the rabbit is your totem animal you could be very fertile and have many children, but you could also experience fertility issues. A rabbit appearing in your life could be a sign that you are ready to have a baby.

Fear. Rabbits are very frightened animals. They consider everything as a threat and they are always on the lookout. They have sharp senses which help them discover when there is a treat around, so they could escape in time. The rabbit as your totem animal most likely shares this trait with you. You could also be very fearful and tensed all the time, expecting the worst to happen.

The rabbit as your totem could help you relax and stop expecting disasters around every corner, and overcome the irrational fears you harbor inside you.

You need to understand that it is all in your head and in your expectations, because if you continue expecting bad things to happen, they will.

Vice versa, if you start expecting good things happening in your life, they will soon start appearing.

Timidity and shyness. Rabbits are very timid and shy animals. If a rabbit is your totem, you could also be very shy and timid, especially around people you don’t know. You could be prone to retreat and isolate yourself from interacting with people in unknown environments even though you have a very sociable and gentle nature.

You have hard time relaxing and starting a conversation.

The rabbit spirit animal teaches you of the importance of being prepared for the future and saving so you can be relaxed and secure.

Spontaneity and unpredictability. Rabbits move in unpredictable directions. They use their zigzag movements to escape their predators. The rabbit totem animal teaches you of the importance of being spontaneous in life. Surprise yourself with unplanned actions and decisions.

Don’t let your life get stuck in a routine. You don’t have to plan every detail. Just relax and enjoy the moment.

Rabbit as Your Totem Animal

With the rabbit as your totem animal, you are most likely a very sweet, kind and loving person. You are gentle and always ready to help people. You could sometimes have unpredictable reactions and behavior. You are also spontaneous and don’t like routine things.

As a rabbit totem person you are timid and alert, and you prefer the company of people you know. You feel awkward in situations where there are a lot of unknown people because you have problems relaxing and communicating with strangers.

You are fast and have good reflexes. You are also intelligent and quick witted. You are also successful and strive towards abundance and prosperity. With this animal as your totem, you are most likely very fertile and have a large family.

You could also be prone to irrational fears and expecting the worst in all situations. These issues are the ones you have to work on changing because they could create obstacles to your progress.

What if the Rabbit Appears in Your Life?

The rabbit appears in your life to announce a period of happiness and abundance awaiting you. Be prepared for success of your business dealings and romantic endeavors.

This totem animal often announces some situations developing quickly and things turning to the better.

Sometimes a rabbit appears in your life as a reminder that you need to make some changes in your daily routine. Maybe you have stuck yourself in some boring duties you tend to do daily, and the rabbit is asking you to change that. Bring some spontaneity in your life. Stop doing something for a change, or begin doing some things differently.

That don’t have to shockingly big changes, it is enough if you simply change the path you walk to the bus station or you walk your dog. It will bring a refreshing note in your days and make you feel happier.

The rabbit sometimes appears in your life as a reminder that you need to work on your fears and complexes.

You need to confront them because they are making your life miserable. Be prepared to open up to other people and freely communicate with them.

When to call on Rabbit?

You should call on Rabbit totem animal when you:

Dreams about a Rabbit – Interpretation and Meaning

Rabbits in dreams are a usually a good omen. Rabbits are a sign of abundance, good luck and good things coming into your life soon. A rabbit brings good news and announces pleasant events.

Things are about to improve in your life, so be prepared to relax and enjoy.

In some cases, rabbits in dreams indicate the growth of responsibilities and duties. These dreams could also indicate doing things randomly without focusing on one thing until you finish it.

Maybe you are used to jumping from one thing to another and never really finishing either of them.

This dream warns you of the need to change such behavior because people might begin to consider you unreliable and a quack.

A rabbit appearing in your dream, especially if it was hopping, that could be an announcement of an approaching pregnancy and a child, so you can start preparing for a new role in life.

A black rabbit in your dream could indicate fear of sexual relations.

Rabbits in dream often indicate lack of commitment and easily changing the focus of your attention. It might relate to quickly changing your mind or changing partners.

A rabbit biting or scratching you in a dream could be a reminder to begin nurturing your relationships more.