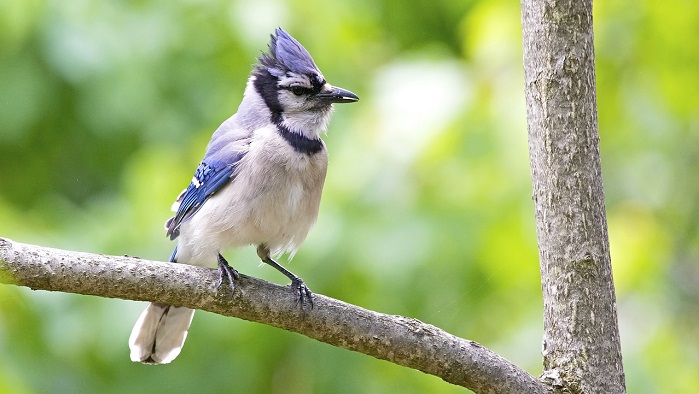 During long warm summer days, North American parks and forests are full of merry melodies; beautiful blue jays bring joy and happiness to all those who hear their songs.

This wonderful exemplar of vast palette of little colorful bird species is a true blue beauty.

Blue jays are about twenty-five centimeters tall and similar to their numerous relatives.

Blue jays’ breasts and tummies are pale, white, while they also have a black necklace type of feathery pattern on their upper body. Their eyes, beaks and legs are black.

An interesting fact, which makes them magical, is that this distinctively beautiful blue color is just an illusion! Blue jays’ feathers are, in fact, not blue at all; it is a result of an optic illusion, refraction of light.

If you take a single blue jays’ feather and break it in half, the illusion will cease and the blue color disappear.

These birds are not migratory and usually they keep close to their nests. Only blue jays inhabiting northern chilly parts of Canada would gather at the end of the summer and travel south in large flocks.

Usually very loud, in these ‘migratory’ days they are incredibly calm and silent. Blue jays fly during daytime, on great heights, without making any sound.

Typically, when not on the move, they always tweet and chatter among themselves. Blue jays are amazing spirit animals, because of their natural, intriguing character. Symbolic meanings of blue jays is greatly based on biological facts about these interesting blue birds.

This chattering bluish little fellow could be an amazing spirit guide and offer useful and practical lessons. After presenting some amazing and inspiring facts about blue jay birds, we will move onto this animal’s symbolic meaning and its spiritual powers as a totem animal. 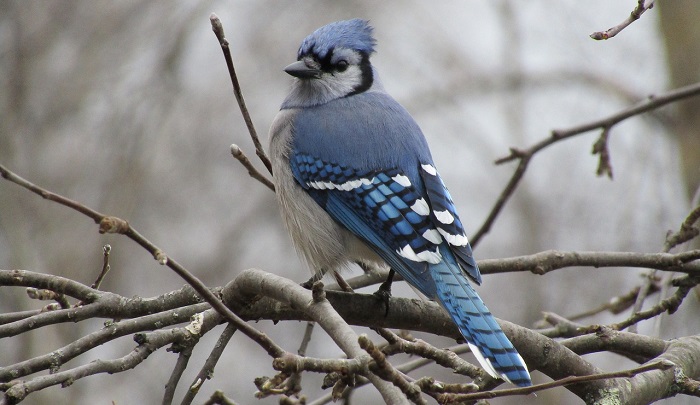 These lovely little birds are magical, indeed. They are loud and easily noticeable. Blue jays possess an impressive repertoire of vocalization sounds; they whistle, tweet, make clicking sound, sing and chatter all the time. Blue jays are also good imitators.

Similarly to parrots, they can learn to copy sounds of bells and such. They use their remarkable vocalization skills to trick their enemies.

If an intruder tries to steal their eggs or harass their nest for any reason, a blue jay would produce exactly the same sound as a much larger and definitely more dangerous falcon.

Blue jays also know that strength lies in unity; they know they are small and that, when alone, they do not stand a chance in front of bigger birds or other animals. Blue jays stick together and they would team up in order to chase away a predator by loud croaking.

However, when a blue jay has eggs, it would completely calm down and restrain its loud nature, in order to keep predators away, by staying out of their sight and their senses.

These amazing blue chatterers make their nests high, at about six meters on both conifers and decennial trees. Sometimes blue jays would settle into abandoned nests of migratory birds.

Themselves, blue jays make cozy nests out of small branches and line them with grass.

Blue jays usually have about six eggs and lie down for two and a half weeks. Once little ones see the first light of the day, both parents make sure they have enough food, warmth and safety.

Blue jays may look cute, tiny and ‘fit’, but they are real little gluttons! They are resourceful, quick, clever and flexible; blue jays are not picky when it comes to food.

If they are hungry, they could eat all types of food. Their small, but strong, black beaks are always occupied by something.

Finally, blue jays are tactful, organized and economical. They would store excess food under ground or under tree bark; it is good always to have some extra food for ‘dark times’.

These little birds are tough and aggressive if it comes to protecting their home, territory and food supplies. It often happens that groups of blue jays attack uninvited guests and threatening predators.

People do not like blue jays because of being so dominant in nature; blue jays would commonly chase away other birds from bird feeders people fill in with nutritious grains over winter months and take all for themselves.

However, they symbolize many important concepts for us, thinking humans. These exceptional birds represent communication, talkativeness, sociability and community.

They communicate among themselves most of their time, which make them universal symbol of the importance of sharing and exchanging information.

Communication is what makes our human lives so fulfilled, amongst other things. Blue jays symbolize the very essence of the importance of communicating with others. These blue chattering fellows also symbolize strength of unity.

They represent community and unity, mutual support and mutual help.

Sometimes, no one is strong enough to stand on his or hers own and blue jays know that very well. The true strength sometimes lies in group of individuals. Blue jays represent the power of unity.

With it, there go loyalty, protection and guardianship, other, much appreciated and valued concepts we all lean towards.

Blue jays also represent flexibility and adaptability. They stand for endurance, persistence and cunningness. Blue jays are symbol of survival. They are extremely skillful and they find it easy to adapt to various conditions.

They do not ask much; blue jays, as we have mentioned, could eat almost anything, which is definitely a good survival mechanism.

They also keep some food for days when sources are less accessible. All of this makes blue jays symbols of adaptation, resourcefulness, tactics and modesty. Blue jays symbolize trust and loyalty.

They keep to their fellow blue jays and are bound to their homes; most of blue jays are, except those northern Canadian ones.

They stand their ground and see to keep all intruders away. Blue jays thus represent protection, guardianship, support, caring and family bonds. They also represent friendship, connection and mutual understanding.

Blue jays could also be seen symbol of curiosity and intelligence. We have already said they have amazing social and organizational skills when it comes to keeping predators at bay.

They also imitate big animals and chase away their enemies by trickery and deceit! They are clever little fellows, which mean they have enough intelligence to outsmart others.

In addition, blue jays are curious little fellows; they represent the idea of keeping in touch with everything that is happening.

If we talk about Blue jay totem, we could definitely say this spirit animal is, by all means, one of the most talkative, sociable and community associated one. Blue jay totem teaches the lesson of teamwork and cooperation; to be exact, it teaches the importance of being reliable and of relying on others.

If this is your spirit guide, you probably know what we talk about. Blue jay people are communicative, active and curious people, who love to have all information up to date.

Blue jay people will always know the latest news and everything that is happening around the hood. They are loyal ones and very much attached to their place of birth.

They are extremely active and on the run all the time, but in a restricted area, to say so. Blue jay people have strong will, they are focused and determined and they will definitely stand their ground, faced with any kind of threat and danger.

These individuals are more practical than creative, although they do not lack skills to make something out of poor resources. They have good imagination, strong intuition and they are clever. They are capable of making the best of everything their destiny has set out for them.

Blue jay people talk all the time, but it is unlikely you would hear them complaining, even if they are in deep trouble. Their mind is set towards finding a solution. That makes these charismatic ones positive minded.

Blue jay people are looking at life from their specific practical and optimistic perspective. If something seems to go wrong, they have already invented some new plans and ideas.

They act instantly, if needed and are rarely wrong. On the other hand, they always have a backup plan for everything. Blue jay people are those who will offer you help without being asked, but they will make it their way.

Although Blue jay people are always surrounded with others and they love sharing experiences and talking stories, we could not say they are extremely compassionate in terms of showing emotions.

They just have that incredible drive and need to tell others what they have experienced and they expect some feedback.

That also makes them good listeners. Their compassion is not soft, comforting one, but perhaps even more helpful, because it is practical.

Blue jay people are honest, trustful and loyal. They would never betray anyone, even people who are not in favor with them. They see such moves dishonorable.

Blue jay people maintain their reputation of loyal, brave and honorable personalities and they are true to that. They do not request medals and golden goblets for their good deeds; they are satisfied to see that what they have said or done has a positive outcome.