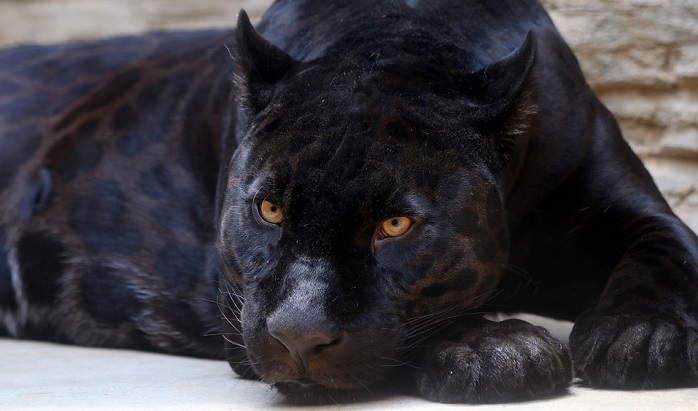 Black panthers are one of the rarest animal varieties on the planet. Although people commonly think of black panthers as separate feline species, they are, in fact, leopards, only blackened fur coated.

If you observe those breathtakingly beautiful cats more closely, especially when these elegant felines are sunbathing, you would probably notice spotted pattern of their inner fur, typical for leopards.

There are other blackish examples of usually patterned great felines, seen as black panther species, as well.

Before we move on to more mystical and intriguing information about black panthers as powerful spirit animals, we will share with you several interesting wildlife facts about these beautiful cats.

First of all, let us unravel the truth behind their remarkable black coat. Black felines, called black panthers, have more amount of a specific pigment that makes their fur dark, compared to others of the same species. They have certain specific genes responsible for distribution of the pigment.

Why is that so, you might ask. Well, as with other strange and fascinating things about wildlife and the animal kingdom, the Nature has obviously had an incredible inspiration for black panthers’ fur.

Black panthers are, actually, black leopards of Africa and Asia and black jaguars of South America. They look pretty much the same, only jaguars are larger. However, all of them are simply considered black panthers. Why these animals have their patterned fur shaded in black?

There is no real, practical reason why some of these animals are black. Some research data suggest that representatives of these species that inhabit higher grounds, with less tree shades, are more likely to be black, than those living mostly in jungle environment.

However, the biological explanation is that there is a genetic predisposition, which makes some of these felines black. Whatever the purpose of their black coats is, they surely look amazing.

Not only black panthers are dangerously beautiful (well, their fancy looks do not make them less predators), but these animals are rare. In addition, what is rare in nature is more fascinating, precious and valuable in human world.

Since the expression of ‘black panthers’ is already adopted as a common name for all black representatives of various big cat species, we will use the same name in following paragraphs. 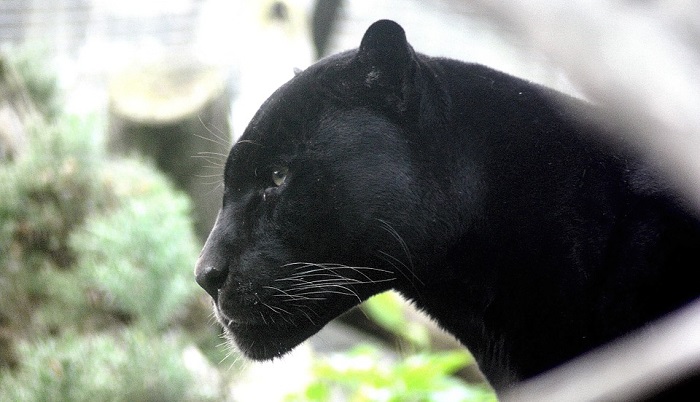 These unique felines are rare all around the world, although it is more probable to see them in Asia. The sight of a black panther, even in the zoo, definitely makes an impression.

Let us find out more about symbolic meanings of this beautiful animal.

Big cats have always been powerful symbolic animals, as well as they are impressive in nature.

Throughout human history, these cats have always been considered amazing, powerful, mighty, beautiful and elegant. Big cats are generally associated with strength, glory, royalty, elegance, valor and a bit of mystery.

As we all know, Ancient Egyptians were enormously in favor with cats.

They adored Bastet, the cat goddess and Bast, the lioness goddess. Bastet was sometimes represented simply as a domestic cat, but this powerful deity was also commonly portrayed as a woman with a black panther’s head.

Egyptians associated this deity with war, courage and strength, so no wonder they added a black panther’s features to her appearance.

Other glorious traditions of the Ancient World also adored black panthers. In Ancient Greece and Rome, these rare felines had their special place. Since there are literally hundreds of their deities, no strange if you have not heard about all of them.

Ailuros was a panther deity in Ancient Greece, similar to Egyptian Bastet. Romans were fascinated with black panthers and wild felines in general; they loved to decorate temple walls with illustrations of this amazing big cat.

Black panthers are also present in medieval heraldry. During the twelfth century, there was a Slavic principality, known by the name of Carantania.

Their lands were located between Slovenia and Austria and black panther was their symbol. A heraldry motif of the same black panther is still being in use in Austria. Standards of Styria feature the glorious black feline.

About eight centuries later in history, there was an attempt of making a black panther the Slovenian standards’ motif.

In modern history of the twentieth century, a black panther became an important symbol of resistance, strength, freedom and glory of African-American revolutionaries during sixties.

Black Panther Party representatives’ initial plan was to promote their ideas, which were to live free and not oppressed on basis of their race. The symbol they have chosen was ideal.

They chose a roaring black panther to use on their logos, a true symbolic embodiment of unrestrained force, strength and courage. Black panther is still a popular symbol amongst many African-Americans.

Black animals have always been considered special, because they have that rare ‘spice’ that makes them unique and exceptional. Speaking about felines, it is an interesting combination.

Cats are generally associated with mystery and darkness, strength and courage, cleverness and a bit of trickery, freedom and independence. Add a bit of black color and you make an ‘upgraded’ version of big felines’ symbolism.

The base of black panther symbolism is the same as that of leopards or jaguars, with this special addition of blackness.

Black panthers symbolize mysterious things and darkness, which is a common symbolical trait of all black animals.

Having in mind that big felines are generally known as incredible masters of stealth and hunt, that they are mostly crepuscular animals, it is easy to associate them with darkness and mystery.

Being black just makes them even stronger dark symbols. While black animals indeed are identified with dark spirits and unpredictable forces of the night, they are also considered magical and mysterious in positive, or at least neutral, terms.

These dark felines are symbols of deeper knowledge, secrets, hidden lore and wisdom.

They symbolize all that is not known to common living creatures. They are believed to have power to communicate with forces of realms that are out of our reach, understanding and even imagination.

Black panthers could talk to souls of those that are dead, carry messages from the other side and are believed even to embody the souls of those beyond our reach.  They are magical, incredible creatures to be adored and awed.

In addition to being ultimate symbol of strength, night, mystical forces and darkness, black panthers represent beauty, uniqueness and elegance. These black felines are simply irresistible; not only they indeed are beautiful, but also they only few within hundreds of big cats.

They represent the idea of the importance of uniqueness. These amazing animals remind us that some of the most precious things on earth are natural, rare and extravagant. We should always pay due respect to such an idea.

These masters of the art of hunt move elegantly, silently and gracefully. They have strong bodies, sharp teeth and claws and yet every single move they make is delicate, soft and breathtaking.

Everything they do is even more emphasized by the fact that they are black.

These amazing cats are often associated with the very idea of beauty and elegance, especially the idea of strong and fatale women; no strange, a black panthers is a common motif on ladies’ accessories, such as jewelry, brooches, scarves and so on.

They might be adorable and fatally beautiful, but they are fatally dangerous, as well. While black panthers and big felines are not particularly interested in chasing or killing humans, they are to be avoided.

These are wild beauties, dark, agile and carnivorous. Black panthers are always associated with threat, danger and fear. We are fascinated by their appearance and skills, but we are very much afraid of their deadly jaws, of course.

These animals are solitary, very cautious, aware of their strengths and flaws, intuitive, instinctive and patient. Black panthers are not thoughtless creatures; they know when the right time is to attack and kill, when to retreat and hide.

They are very fast and silent. Black panthers embody the idea of survival on one’s own. They do not hesitate to act, but they know when to calm down and save energy.

Black panther totem is probably one of the most popular spirit guides of choice. This incredible spirit animal teaches great lessons, inspires action, imagination and learning.

Black panther spirit animal is an amazing spiritual guide. However, you should always be cautions if guided by such a powerful totem. This totem animal gives an individual a lot of strength, energy and self-confidence to achieve greatness. However, such strong traits are always to be taken with caution.

Black Panther people are easily recognized by their exceptional, a bit mysterious and dark appearance, proud posture, calmness and silence. These are individuals who make an impression on others by simply showing up somewhere.

They do not need to say a word. This could make them vain and too proud of themselves, if they simply let it out of control. However, most of Black Panther people are aware of such risks and they learn how to manage their spiritual traits.

Individuals guided by the Black Panther totem are highly intuitive, interested in spiritual things and learning about the world in general. They have high standards, especially when it comes to relations with other people.

They choose their friends carefully and, although usually popular, they are quite reserved and could be indifferent. It takes a lot of effort to impress a Black Panther person. They individuals are extravagant, intelligent and artistic.

They are creative and quite smart. They are never manipulated by other people and they always stand their ground. However, they are excellent in tactics, so they know when to step back, if needed. All in all, they are neither easily hurt or impressed.

This is a risk for every Black Panther person; they are prone to apathy and depression, simply because they could be easily bored. The lack of motivation makes them feel more and more down, so they need to keep themselves busy with something, all the time.

We cannot say Black Panther people are especially kind or understanding, because they are very self focused. However, they would never betray a friend, break an oath, lie, deceive or intentionally hurt anyone just for amusement.

They are polite, well mannered and elegant. They know many things and love to share their experiences, but only with those they have chosen to talk to. They are not particularly good listeners.

However, Black Panther people have their soft side. Behind their black velvet soul, there is heart of a true protector and a passionate lover.

They are possessive people and they would never let anyone damage something they love.

That stands for people, as well. A Black Panther person would rather risk their own life than to see their dear one suffers.

They are known to be trustful and loyal friends, protective parents, passionate, devoted and dedicated lovers.