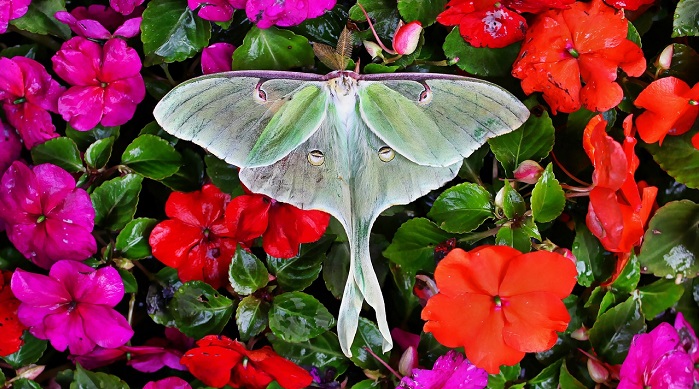 The Luna moth is a moth belonging to a group of giant silk moths. Luna means moon in Latin, so this moth could also be called the Moon moth.

This is a truly giant moth, with wingspan of around 114 mm, which can sometimes reach up to 178 mm. Its wings are lime-green and the body is white. Its larvae are green as well.

Luna moth is among the largest moths who inhabit North America. Depending on the country it inhabits it produces from one to three generations per year.

In colder climates, such as Canada, it has only one generation, while down south it can have two to three generations during one year.

These moths have special defensive mechanisms, such as clicking sounds to warn potential predators, as well as regurgitating contents from their intestines which smell bad to ward off enemies.

Their long tails also serve to confuse potential predators, such as bats. They wrap their cocoons with silk in leaves, which help protect the larvae from potential predators while they undergo the process of metamorphosis. That is a great camouflage method.

Their green color is also a way of keeping their predators away and they use it to camouflage themselves in natural environments. These insects go through four stages in their development: egg, larva, pupa, and full grown adult.

Their natural enemies are bats, owls, hornets, some types of beetles, and parasitic wasps.

The food for their larva are birch trees, alder, willow, walnut, persimmon. They prefer habitats where there are large green leaved forests, especially hickory trees.

Males and females have a similar size and appear similar as well. They have a pattern which resembles eyespots on their wings.

These moths don’t feed and they use the energy from the fat they have stored previously while they were in the larvae phase. The difference between the females and males is in the size of their abdomen.

Females have a larger one because it is full of eggs. Males have longer and wider antennae than the females. 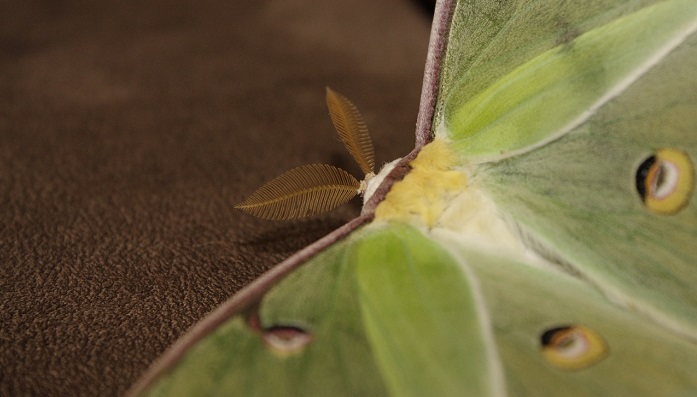 These moths inhabit primarily North America and Canada. In some cases, they are found in Western Europe. Their process of growth into an adult goes through stages.

They spend around two weeks in the egg stage, then up to 7 weeks in the larvae stage, around 9 months in the pupae stage, and only around a week to 10 days as fully grown winged adults.

They are not rare moths but they live so short and they mostly fly at night so they are not easy to see in nature. Their purpose is reproduction and they die after performing that duty.

Sadly, the number of Luna moths is decreasing, mostly because of the loss of their habitat and the use of some pesticides.

The Luna moth has different symbolism related to it.

It sounds a bit depressing when we think of how long it takes this moth to grow to be fully grown adult and then it only lives about 7 to10 days.

This is a very special spirit guide and has a variety of symbolism attached to it. Some of the most important Luna moth meaning and symbolism include:

The whole life of a Luna moth is one big transformation.

This moth goes from stage to stage, until it finally reaches its true face. This insect symbolizes the process of the development of our personality.

As the Luna moth, we all go through different stages. We go through ups and downs until we finally form into the person we desire to be.

The Luna moth has only seven to ten short days to live, it mates and then it dies.

This insect is the symbol of transience of life and a reminder to us to stop wasting our lives worrying about things that aren’t important.

It is a reminder to start enjoying our lives more and living in the now.

The Luna moth is a sign we should stop putting our lives on hold while waiting for some things to happen.

It reminds us to love our live completely as imperfect as it is in this moment.

The beauty and brevity of life

The Luna moth waits for a long time before it can reveal its beauty to the world.

Unfortunately, it doesn’t spend much time flying around because it has a very short lifespan.

The Luna moth reminds us of the brevity of life and the need to enjoy every second of it as much as we can.

Although the Luna moth has much shorter life cycles than we humans have, through the process of growth into an adult, and dying afterwards, it symbolizes life and its cycles.

Its appearance reminds us of the inevitability of these phases.

The Luna moth doesn’t have a lot of time to enjoy the beauty of the world.

Almost immediately after leaving its cocoon it begins the process of mating and laying the eggs which will begin a new generation of Luna moths that will repeat the process all over again.

This moth symbolizes the process of reproduction with the purpose of continuing the species, which starts with birth and ends with death.

Something rare and precious

Seeing a Luna moth is something very special because they can rarely be seen; that is why, the Luna moth symbolizes something which isn’t readily available and precious.

It symbolizes something not within the reach of many people.

When it appears in our lives, we should consider whether there’s something or someone in your life that is precious and won’t be there for a long time.

The Luna moth possibly reminds you to enjoy its presence while it lasts and try to appreciate it as much possible.

Releasing the past and new beginnings

The Luna moth could also symbolize getting rid of our past beliefs and attachments and changing our lives completely for our own good; it is possibly that this moth appearing in your life symbolizes your desire to release the past and embrace new things that are coming into your life.

It symbolizes getting rid of the old and familiar for the unknown and new. It is a symbol of new beginnings.

Uniqueness of every moment

These beautiful creatures have short lives and appear only during the night which is why it is so difficult to see them.

Seeing one is a reminder to you to appreciate the beauty and uniqueness of every moment.

Every moment of our lives is precious because it never repeats itself.

The Luna moth is asking you to enjoy your life and every moment of it.

Seeing a live Luna moth these days is almost as rare as winning the lottery.

People who have seen these beautiful insects, could consider themselves very lucky, especially in recent days when they have become endangered in some areas.

If the Luna moth appeared in your life, that could be a great sign of luck that is expecting you in the upcoming days.

The Luna moth is close to being an endangered species.

One of its worse enemies is pesticides, which can destroy generations of these beautiful insects and they can destroy them for decades to come.

The Luna moth and the diminishing of its numbers due to human intervention and pollution is a reminder to us all to become more aware of the planet and our direct participation in the destruction of the beauties it possesses.

The Luna moth is only a tiny segment of the waste sea of similar cases, where species are disappearing due to human negligence and preoccupation with their selfish interests.

The fact that it has become almost impossible to see this beautiful insect is a true message to us all to wake up before it is too late for all.