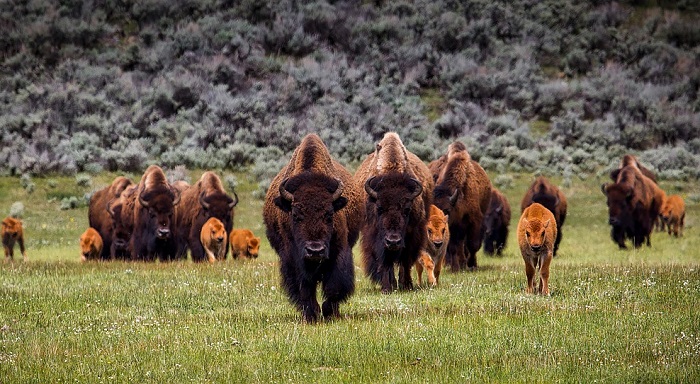 The American bison or the American buffalo, or simply bison or buffalo, is a species of bison from North America. These large animals used to live in large herds until at one point they were almost extinct because of hunting for commercial purposes as well as due to diseases they got from domestic cattle.

In recent times, their numbers are increasing thanks to the new protected habitats in national parks and reserves of nature where they usually live.

Both the terms buffalo and bison are derived from a French and Greek world used for ox. The term buffalo is used to describe this animal from the year 1616, and the term bison was first recorded in the year 1774.

The American bison or buffalo, or bison is a close relative to the European bison.

Buffalo or bison has a long, shaggy looking, dark – brown coat during the winter and lighter in weight and color, summer coat. The males are a larger and usually significantly heavier than the females.

These animals are rightfully considered giants. Their length ranges from 2 to 3.5 meters, and their height from around 1.5 meters to 1.8 meters. They can weigh from 300 kg to a ton. Bison raised in captivity can grow surprisingly big, but they become unnaturally heavy. The heaviest recorded weight of a captive bison was around 1.700 kg.

Both males and females have massive heads and short curved horns, which are around 0.5 meters in length. They use their horns in fights with other animals in the heard to defend themselves or gain status in the herd.

These extremely large animals eat plants and spend most of their days grazing on the grass of the prairies of North America. They usually graze around two hours, they rest, and then move to another location to graze.

Bison or buffalo were never successfully domesticated, due to their wild and uncontrollable temper. They are dangerous and powerful animals, very hard to control. They could jump very high vertically (about 1.8 meters), and when they are excited they could run up to 64 km/h. They can easily escape and ruin any fence.

These animals live in prairies, plains and in river valleys. They could also graze in areas with hills that are not very steep. They are migratory animals, and usually have daily movements in search for food and fresh water. Their diet consists mostly of grass and sedge. In the winter they consume snow instead of water.

The reproductive process of buffalo is somewhat specific. Females are in herds with other females and their young. Their male offspring leave the maternal herd when they are three years old. After leaving, they could join other bachelor herds or live alone. 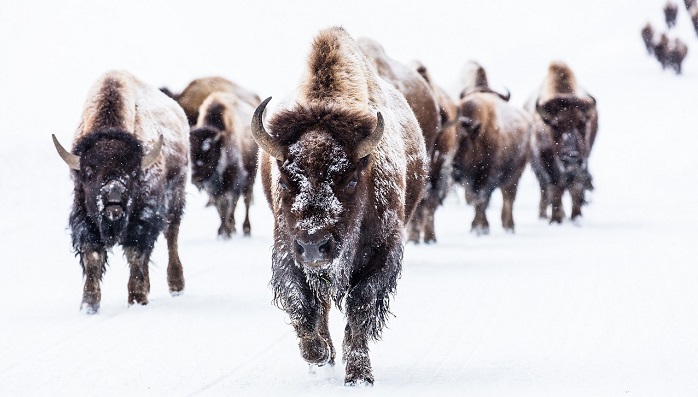 Male and female herds are usually separated until the breeding season begins, and that is usually from July to September. Sometimes female herds have older males living there.

Only female bison raise the young and the male have nothing to do with their offspring and their raising.

Buffalo live in herds which have a strong hierarchy. Bison that are born at the beginning of the breeding season are usually stronger and larger and grow to be dominant adults. Such bison pass their genes to their offspring because they breed early in the breeding season.

These dominant bison also have a higher fertility rates than the ones born at the end of the breeding season.

The pregnancy of bison females lasts about 285 days. The bison calf nurses its mother until a new sibling is born. They live around 15 years, and in captivity up to 25.

Some bison display homosexual behavior, usually male. It is presumed that it happens for the purpose of bonding or sexual experience.

Buffalo are protected by their size but they are sometimes attacked and eaten by wolves, usually calves and females. Wolves can hunt buffalo for hours. Buffalo have special defending tactics against wolf packs.

These animals are very dangerous and are a threat to humans. They can run faster than us and many people have been injured and killed by them.

What does the Buffalo, Bison Symbolize?

This spirit animal gives the gift of harmony and peace in life.

This animal symbolizes the will and attempts to survive and overcome challenges and obstacles.

The Meanings of Buffalo, Bison as a Spirit Animal

The Buffalo, Bison as a spirit animal can have many different meanings. Here are some of them:

Gratitude and appreciation. Buffalo or bison as a totem animal reminds us to be grateful for the blessings we have in life. It teaches us how important is to appreciate everything other people are doing for us and never taking that for granted. This animal reminds us to focus on the good things in our lives instead just thinking and talking about the things that we are not satisfied with.

Abundance and provision of needs. Buffalo was a source of supply of the basic needs of the Native Americans, first of all food and clothing. For that reason it is a symbol of abundance and prosperity.

Kindness. Buffalo or bison totem animal teaches also of the importance of being kind and gentle towards others. Ttreat everyone with respect.

Groundedness. Buffalo or bison are large animals, with strong and powerful bodies firmly standing on the ground. These animals as your totem animal teach you of the need to stand firm on the ground and don’t allow circumstances to manage your thoughts and behavior. Try to resolve everything in a calm and balanced way.

Protectiveness and communal spirit. These animals are highly protective of the members of their herd. When predators attack them, they use different tactics to defend themselves and prevent the predators kill and prey on them. As a spirit animal, the buffalo or bison teaches you of the importance of your family and close social circles, and the need to protect them if they need your help.

Stamina and endurance. These animals are very strong and solid. They teach you to stay strong and endure when times are tough. They also teach you to believe in your strength and capacity to overcome any difficulty you might face.

Aggressiveness. These totem animals have a very aggressive nature when agitated. They are extremely dangerous in that state. If the buffalo or bison is your spirit animal, it teaches you to refrain from aggressive behavior and uncontrollable reactions.

Stubbornness. These animals could sometimes be extremely stubborn. With the buffalo as your totem animal, you might demonstrate some level of stubbornness, and this totem teaches you of the necessity to overcome this negative personal trait because it is only doing you harm.

Freedom. Buffalo or bison is an animal that can’t adjust to captivity easily. It loves its freedom and will do all it can to escape the fence of the prison it found itself. As a totem animal, the buffalo or bison teaches you to appreciate and be grateful for your freedom. Sometimes it reminds you of the need to be more independent in life.

Buffalo, Bison as Your Totem Animal

Buffalo or bison as your totem animal gives you many special interests, such as striving towards spiritual knowledge. It could also be a sign that you are very appreciative and gentle person, always expressing gratitude for the blessings you have or for the kindness and good deeds others are doing for you.

A buffalo or bison as your totem animal is a sign that you are highly spiritual. This spirit animal as your totem often describes you as a stubborn and determined person, who never backs up and never gives up. You confront your challenges and obstacles and you don’t avoid them.

With a buffalo or bison as your totem animal, you are most likely a very sociable person always ready to hang around people you like.

You could also be uncontrollable, aggressive and unpredictable in situations when someone provokes you. You tend to react without first thinking and examining the circumstances of the situation you found yourself in.

What if the Buffalo, Bison Appears in Your Life?

The bison, buffalo appears in your life often as an announcement of progress and abundance coming soon. It could indicate slowly beginning to accumulate wealth and the things you desire.

Its appearance in your life could be questioning your need for freedom and independence. Maybe you feel that is time to be on your own and get rid of the family restrictions.

Sometimes this animal appearing in your life could be a reminder of the importance of being a part of a group, asking you to join again if you have wondered away.

This animal appearing in your life is asking you to trust that the Universe is taking care of your needs and you need to relax and begin accepting that fact. Be grateful for the blessings even before you receive them.

In some cases, this animal appearing in your life could be an announcement of success. It might indicate that you are currently preparing yourself to begin manifesting and accomplishing your desires and it’s asking you to be patient.

When to call on Buffalo, Bison?

You should call on Buffalo, Bison as your spirit animal when:

If you dreamed of buffalo or bison, your dream is usually a warning sign about your goals and plans for the future. Most likely you have strayed from the right path to accomplish them. It also indicates surviving, strength, endurance, etc.

A white buffalo, bison is a sign of fortune and success.

An injured or killed buffalo or bison is a bad sign, possibly indicating some issues with your current projects. It reminds you to think well before making some important decisions or taking action. Maybe you should postpone the beginning of some new projects or endeavors you were planning to start.

Dreams of buffalo might indicate some stubborn rivals you might come across but fortunately being able to confront them and easily dealing with them.

A buffalo in a dream could also be an announcement of some opportunities coming your way, to increase your wealth and gain more abundance. This dream could be a reminder to be more grateful for the blessings you already have and express your appreciation more.