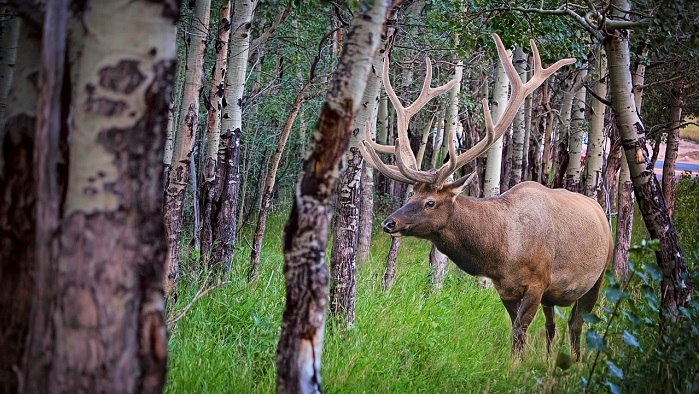 Elk is one of the largest examples of Cervidae family, a beautiful big horned mammal, similar to deer. Elks live in northern parts of the world, in Eurasia and North America. This animal is known for its amazing grandiose antlers and massive body.

People admire their appearance and their characteristics and in Asian countries, these animals are considered powerful spirits. Certain parts of elks’ bodies are traditionally used as medicines; for example, their antlers and velvet they shed each year.

Elks have rich cultural significance in various traditions. Native American tribes, such as Anasazi from far past and Kootenai, Blackfeet, Pawnee, Ojibwa and Cree, admire and respect these animals. There are remains of amazing cliff pictograms depicting elks, carved millenniums ago by Anasazi Indians. In Lakota society, elks have played even greater role.

Lakota people believe elks are protective, life-giving spirits, full of masculine power and energy. A tooth of a dead elk is given to young Lakota males, in order to provide them with long life, strength, but also great sexual potency.

Lakota people believe that an elk’s spirit is a kind of embodiment of masculinity and courage, sexual prowess, as well. In Asia, there are evidences of worshiping female elks; Neolithic petroglyphs of female elks are found in Asia.

Elk motifs are still featured in modern society. For example, Utah and Michigan use elk motifs as their official state marks. An elk appears on Michigan’s flag and seal and is considered official state animal in Utah.

Magic of elk spirit still lives on in modern day. Their antlers are used for decorative purposes, while velvet from them is sold to East Asian markets as a medicine.

In some countries, it is believed elks’ velvet possesses special properties and that it can be used as an aphrodisiac. Elks’ hides are being used for clothing and decoration. Chinese, Koreans, Mongolians, Turkic and Tungusic people have all been breeding elks for their antlers.

All of these interesting information lead us to assumption that elks’ symbolism must be quite rich and amazing.

Elks are powerful spirit and totem animals and they symbolize truly important concepts and ideas in human world. Let us find out more about it. 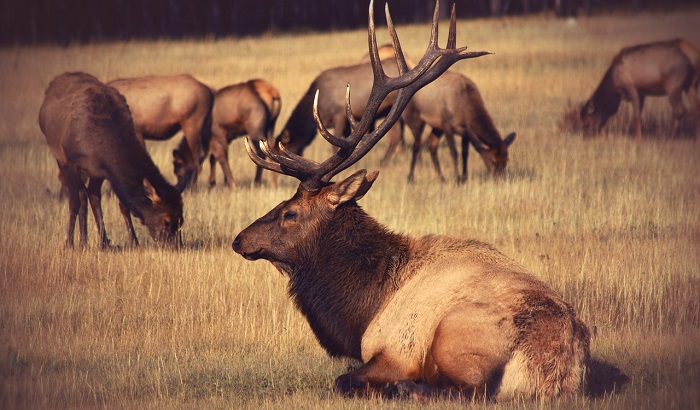 Elk symbolism and spiritual powers of this impressive creature are somewhat similar to those of its relatives, deer and moose.

Greater part of interpretations of elks’ symbolic meanings originates from Native American traditions, since tribes of North America have always had great respect for all animals inhabiting their lands.

Since elks are both of material and spiritual ‘use’, native Americans have learned to respect these amazing creatures long time ago.

Elk symbolism is mainly based on their understanding of its spiritual powers.

Elks represent masculinity and dominance, in the first place, just as moose and deer do.

Their impressive appearance, especially of big adult males with their amazing antlers, makes other animals sty away and leaves people breathless.

Elks symbolize dominance, leadership and masculine power. They are believed to embody the idea of free spirit, self-confidence, bravery and courage.

The masculine element is quite important. During the mating season, adult male elks would fight amongst themselves, in order to ‘win’ their mating partners, gentler, antler-less females.

The very sight of two elks fighting is abundant in raw energy and force. In symbolical sense, it is the ultimate expression of masculine energy and dominance.

Elks are, thus, considered powerful totem animals, especially for men. It is believed they would give a man enough courage and strength, including great sexual potency.

Not only elks represent courage and strength, but also these animals are also associated with guardianship, defense, protection and endurance.

They are physically fit to survive harsh weather and endure cold we people would probably die from.

Elks possess incredible stamina and embody the very idea of endurance, perseverance and adaptation. They are capable of adapting to extreme climate conditions they live in.

Elks could survive days without shelter, food or water and are fit to search for those for miles and miles of snowy, icy areas.

Elks are usually seen in single sex groups, until the mating season. These animals represent the importance of community and embody the idea of motherly love.

Female elks are caring and loving mothers. They nurture their young ones for almost a year.

The bond that exists between two is one of the good examples of the importance of having good relations with your dear ones, especially with family members.

Although elks are large and might even appear intimidating, they do not attack other animals for no reason. They feed on grass and plants and are overall calm creatures. Elks represent grace and tenderness, especially females.

Female elks are not as impressive as horned adult males, but they are an embodiment of grace, tenderness and simple beauty.

The bond between an elk mother and its calf is something we could truly take a good lesson from.

Since elks are not aggressive towards other living beings, they represent peace, balance and harmony. People see these animals beautiful and dominant and admire them not only for their stamina and physical strength, but also for their tranquility and calmness.

Elks also symbolize pride, success and glory, but those that are always based on good intentions.

Elks, as spirit animals, teach us the importance of being self-confident and ambitious, but never at the cost of others.

Elk spirit animal is an impressive one. If you are protected by its power, you will definitely have fulfilled and harmonious life, if you learn to listen to it. Elk totem offers guide and protection and helps you achieve the best you can.

At the same time, it teaches you the importance of tolerance, understanding and respect for other living beings.

Elk spirit inspires great plans and projects, feeds your self-esteem and gives you enough courage to overcome hard times by using the resources you have, emotionally, physically and materially.

Elk people are calm, understanding and proud. They know what they want in their life and if they do not, they do not feel anxious or stressed too much because of uncertainty of the future.

These people are good at planning and organizing their lives and they do everything with calmness and patience. Seen in nature, elks teach us that there are times we have to invest a lot of effort and be very patient, in order to get what we need or what we want.

Elk spirit gives you that kind of understanding of the world and stamina to endure it.

People whose totem animal is the mighty Elk have love for other living creatures. They are not greedy and envious; they keep to their own business.

Sometimes, they could be too dominant and they fail to hear other peoples’ opinions and advices. If your totem animal is Elk, you are probably a person others look up to, so you have to give them a good example.

Elk people do not find it hard to do; although they are not attention seekers, they easily catch the spotlight.

Elk people could inspire others, but they need to find their own inspiration first. Elk totem will help you see the beauty of the world and to respect yourself, just the way you are.

This spirit animal teaches us to always do the best we can, out of that what we have. Glorious things are often accomplished by starting with simple, modest and small steps.

People born under the totem of Elk are polite and kind; they know how important is to maintain good relations with people around.

Elk spirit inspires uniqueness and self-reliance, so people with this totem animal are solitary and sociable at the same time. They never lose their integrity and they enjoy times spend on their own, doing what they love.

However, they are not estranged from others. Elk people maintain good friendly relations with their community, but they usually have only a few close friends. Moreover, they value family bonds and are always protective and caring towards their closest ones.

Elk people are patient and wise. They do not give up on their dreams, but they are not likely to force things up. They are capable of waiting and they always think deeply through what their mind is set on.

Elk totem teaches the importance of being serious when the time requires that.

Other times, they are capable of relaxing and they are generally easy going. However, once they are up to something, they will invent incredible solutions, in order to accomplish their goals.

Dreaming about an elk

If an elk appears in your dream, this wonderful animal wants to share with you important messages. If Elk is your spirit animal, then dreaming about it is like a miracle. It means your totem cares about you and wants to offer you guidance that is even more direct.

If you are currently in not so happy phase of life, dreams about and elk appear in order to encourage you, to give you strength to overcome these hard times.

Moreover, an elk in a dream reminds you you are strong enough successfully to overcome all the challenges awaiting you in future.