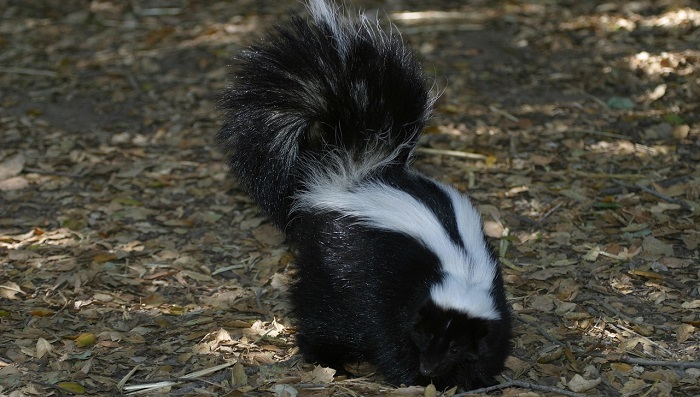 Skunks are mammals known for their ability to spray a liquid which has an unpleasant odor from their scent glands at their enemies.

These animals have fur colors which warn off potential predators. Their colors are usually black and white, but some skunks have brown or grey color, and some are cream. Skunks are all striped. The strips vary from one single strip across the tail, two thinner strips, broken strips etc.

Skunks have slightly elongated bodies and short muscular legs. They also have claws they use for digging their burrows and searching for food.

These animals eat all they can get their claws on. They eat both plants and animals and they adapt their diet to the season. Skunks eat earthworms, larvae, rodents, frogs, lizards, snakes, moles, birds and their eggs.

They also ear leaves, roots, berries, nuts, grass, etc. If they share their habitats with humans, they also eat their garbage.

Sometimes they could scavenge on carcasses of birds and rodents which other animals left behind. Skunks attack on honeybees because they aren’t afraid of their stings, having a thick coat which protects them.

Skunks are solitary animals and they interact only during breeding. In colder climates they are known to gather in dens to keep their warmth together.

They usually live in burrows which they dig themselves. They are territorial animals.

These animals stay in their den for long periods during winter, but they are not true hibernating animals. They are inactive and rarely feed during the time of inactivity.

Skunks have excellent smell and hearing, but their eyesight is poor. They can’t see pass 3 meters. That is one of the main reasons these animals are frequently killed by road traffic.

They usually don’t have a long lifespan, around seven years.

These animals mate early in spring and the most successful mates mate with more than one female. The females prepare a den to give birth to a litter of usually four to seven young. The young kits stay with their mothers around one year. The mothers are very protective, but the males don’t have a role in their raising. 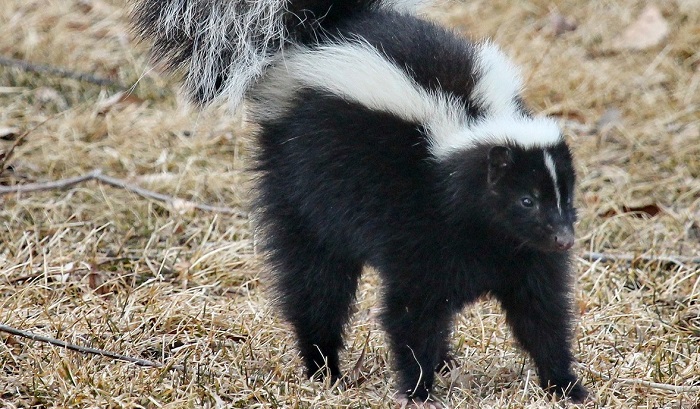 One of the skunks’ most known characteristics is their scent glands, which they use as a defense from predators.

These glands produce a scent with a disgusting smell, able to ward off predators even the size of bears. This smell is very powerful and can be detected by humans in range over 5km.

Skunks use this weapon only when needed because they need 10 days to produce another dose.

They also don’t use it on other skunks unless they are males during mating season when they fight for the right to mate.

This weapon they possess is so strong, that it keeps the most likely predators such as foxes, wolves and badgers away because they are afraid of being sprayed. Their greatest predators are the great horned owls.

Skunks can often be seen in suburban areas. They rarely bite humans and when they do that it is usually because they are infected with the rabies virus.

What does a Skunk Symbolize?

The Skunk Meaning as a Spirit Animal

The skunk totem can have many different meanings. Here are some of them:

Defensiveness. One of the main traits of the skunk is its defensiveness. These animals will fiercely protect themselves and what they think is theirs and they have a powerful weapon to do that. That weapon is their powerful scent glands which emit foul odor to ward off any unwanted intruders.

With this totem animal you are most likely a very defensive person and you don’t allow others mess in your business or take what is yours.

Passivity and pacifism. Skunks are known to react and defend themselves only when there isn’t any other option. As a totem animal they teach you of the importance of getting well with others and avoiding conflicts. Y

ou know as well as the skunk does that nothing good comes out of it.

With this animal as your totem, you most likely exhibit these traits as well.

The Skunk as Your Totem Animal

If you have a skunk as your totem animal, you are most likely a person who avoids conflict at all costs. Just like your totem, who uses its defense spray only when there isn’t any other option, you always try to settle things in a peaceful way.

That doesn’t mean you are defenseless or that you don’t know how to defend yourself. It simply means that you are kind and you avoid arguments.

You want to make people happy and sometimes you need to watch not to jeopardize your own self-respect because of that trait. Not all people are kind like you, and many of them will try to take advantage of your helping nature.

You are usually a charismatic person and people are naturally drawn to you. They enjoy your energy and spending time with you. You have diplomatic skills and you are able to do things your way, but never hurting others to do so.

With this animal as your spirit animal, you know how to defend your stand and you are quite confident while doing so.

What if a Skunk Appears in Your Life?

The skunk appears in your life as a reminder to have a calm approach to some conflicts and disputes you might be facing in your life currently.

You can try out so many other options to find the solution to a difficult situation with someone, without needing to quarrel and fight.

The skunk also reminds you to stand for your beliefs. Don’t let anyone use your kindness and helping nature.

You have to set boundaries and people should know that they cannot misuse you or take you for granted.

The skunk is asking you to be brave and have faith in your abilities to get out of any situation.

When to call on Skunk?

You should call on a skunk as your spirit animal when:

Dreams about a Skunk – Interpretation and Meaning

Dreams about skunks could indicate repressed emotions and feelings of resentment and anger you feel towards some people. You might be ready to explode because of some situation you are in.

Maybe you cannot express your true feelings about some situation and that is what is bothering you.

This dream indicates that you need to confront these issues and don’t let them block you.