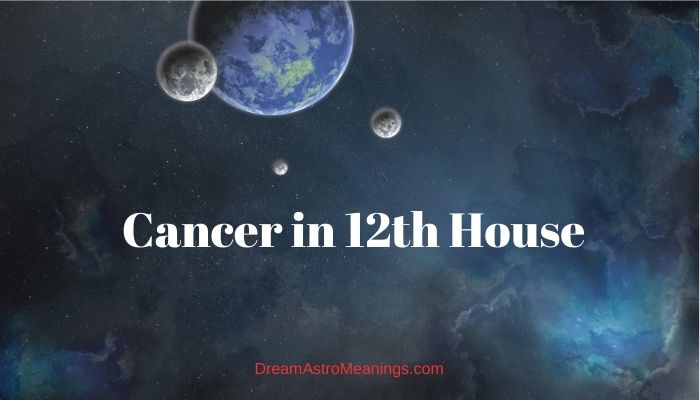 The Twelfth House is one of the most mystical houses in astrology. Its symbolism goes much wider and deeper than it is usually associated only with hospitals, insane asylums and prisons.

The twelfth house represents isolations, distant and exotic lands, dreams, spirituality, past lives, the universe, everything that is above three-dimensional reality.

In a warm and family atmosphere of love, the Cancer woman blooms and gives her loved ones the tenders care. The cardinality of this sign is characteristic of men as well, but Cancer men are more passive and cautious than women.

It is important for a Cancer man to become the master of his home, to realize himself as a husband and father. In such circumstances, he has more confidence, which he does not have much without family support.

The moon is a female planet in astrology, therefore the Cancer man is dependent on the female figure in his life.

Due to the influence of the mother or wife, the Cancer man loses his independence, which is not entirely usual for men in general.

This situation gives him emotionality, anxiety, stubbornness, resentment. To become the master of his life and find happiness in the family, a Cancer man needs to learn to be self-sufficient and use female influence not as a support, but as additional support.

Initially, the cardinal water sign of men does not dispose to become a leader, even with a strong desire. To achieve what you want will have to make special efforts. To feel like the master of their lives, Cancer men need to work on their emotions.

But, having done this work, they become psychologically strong and stable. In an effort to protect men, Cancers often realize themselves in military service. Childhood and family environment have the strongest influence on Cancers.

It is extremely important for them to have a full-fledged family in order to successfully transfer its models to raising their own children.

The feeling of security in childhood gives Cancers a cheerfulness and emotional stability. If a Cancer child experienced many fears as a child, in adulthood he will become anxious and physically weak.

Mom is the main figure in the life of Cancer. The relationship with the mother has a huge psychological and eventual impact on the lives of such people.

Friends and family of those born under the Cancer zodiac sign may have some difficulties in communication, because these close relationships are truly important to Cancers.

On the one hand, they are devoted and always ready to help, but, on the other hand, Cancers are intolerable when ignored. They experience deeply when they feel abandoned or rejected.

Cancer will feel hurt if they see that their friends are unwilling to spend time with them.

However, in most cases, the friendship with Cancer will be strong and warm. In order for this relationship to continue, it needs to be maintained regularly, as Cancers do not survive interruptions in communication.

The soul (Moon) is wounded here (Mars-Pluto), so it attracts everything negative, accidents, operations, injuries, but also death.

The curse (12th house) follows the person along the female line (Moon). Danger of drowning, water, but also alcohol.

Death in a dream, at home, or next to a close person. In extreme situations, this position indicates a short life.

Mercury in the 12th house can indicate the danger that comes through traffic. If it is set up well, then there are dangerous situations in the game, but the person gets out of everything.

With severe impacts, especially if the Moon and Sun are endangered, this indicates danger or death in childhood until puberty.

Therefore, with the endangered Mercury (childhood) in the 12th house (danger), greater caution and some protection is necessary. This always means danger on the street, at the pedestrian crossing, at school, on the playground, when traveling.

That is why it is necessary to keep that in mind, in order to avoid consequences. Also, danger to the lungs. People with this Mercury position should never smoke.

Venus in the 12th house is not particularly dangerous, but since this is a dangerous house, this planet will also be exposed to some risks.

It can indicate venereal diseases, gynecological problems in general, diabetes, kidneys so all that should be paid attention to throughout life.

It mostly brings an easy death, in addition to the person we love. Sometimes death can be liberation, so the soul experiences it that way.

Mars is quite awkward in the 12th house, even when it has good aspects, because even then accidents, injuries, operations, dangers are possible.

However, with good aspects a person can get away with some consequences. If Mars is well inspected by Jupiter or Saturn, everything can be endured and overcome.

But, if Mars is poorly placed, then there is a danger of violence, injury, accidents and death.

This is the most dangerous field of the horoscope, so when the biggest malefic (bad planet) Saturn is found there, then it is quite a difficult fate. The soul leaves the body with difficulty, struggles, cannot leave. Maybe the burden of some deeds makes it difficult for her to move on to the long side.

If Mars is in the human sign, the danger comes from people; in water from water (drowning); in fiery from fire or explosion; in the air from strokes, falls from h12ths; in the earth from earthquakes, collapses, burials; in animal from animals etc.

All according to symbolism. Mars is otherwise a herald of violent death, death in war, from firearms (fire signs), from cold weapons (water and air signs), and with the bad aspect of Uranus, suicide is possible.

It is dangerous when Mars in the horoscope is activated. Then you need to stay away from all risks and potential dangers. Of course, protection is also mandatory, in order to reduce negative energy.

Jupiter in the 12th house is the greatest protection you can have in your horoscope. He is a planet of happiness, and often represents guardians who will always protect, in all circumstances.

Black magic does not work on these people and no one can do anything to them. This means that they have good karma from a previous life, so they are now protected from all dangers.

In extreme situations when Jupiter is attacked, the danger can be abroad, on the highway or from strangers.

Yet in most cases this gives death in faith and divine consciousness. These people are not afraid of death, because they know that life goes on. In difficult horoscopes, death comes as liberation (Jupiter), especially when it comes to severe diseases. Leaving the body is then experienced as the greatest happiness (Jupiter).

In a bad aspect, Jupiter is a representative of Sagittarius and indicates shooting – shooting. If it is found in a fire sign, it is a firearm.

Saturn in the 12th house says that death is precisely timed. Only when it is well placed does it indicate a long life. However, when poorly placed, death usually comes from severe and incurable diseases, or as a consequence of alcohol and drug addiction.

Accidents, tragedies are possible, as well as susceptibility to all negative energies, starting with ancestral debts, curses and black magic.

This is the most dangerous field of the horoscope, so when the biggest malefic (bad planet) Saturn is found there, then it is quite a difficult fate. The soul leaves the body with difficulty, struggles, cannot leave. Maybe the burden of some deeds makes it difficult for her to move on to the long side.

Saturn in the 12th house should be lived as justly as possible so that the negative energy of earlier deeds would not manifest at the moment of death.

If there is at least one good aspect or the depositor (the planet that rules the sign) is well placed, the soul can reduce suffering and pain. Usually life ends in a similar way as it did with the ancestors (Saturn).

If Saturn (ancestors) is in a bad aspect with Pluto (curse) then death can occur as a product of ancestral curses. And not only that, life with this aspect can be a real nightmare. It brings loss, suffering, pain and burden.

It should be re-examined what the ancestors did and what burden they carry on their souls, because all that is passed on to the offspring. Famous pop singer Amy Winehouse had the ruler of the 12th house of Saturn in conjunction with the death planet Pluto.

This is an aspect of the curse, so her life ended prematurely. The conjunction of Saturn and Pluto indicates alcoholism, drug addiction and death due to overdose.

Uranus in the 12th house always brings sudden and unpredictable death. Everything happens in an instant, so the person is not even aware of it, without torture.

Danger of lightning, machines, equipment, electricity, traffic (overturning cars), falling from a h12th, plane crash, explosion, but also all those situations that would not even occur to us.

This is the planet with which events are the most difficult to predict, because they are always a surprise; unexpected and unpredictable circumstances in which a person finds himself seemingly by accident. Only a good aspect of Jupiter can save from such dangers.

It is an aspect of rapid and violent death. Uranus is unexpected, and Mars is a weapon – a bullet. Since Mars is in Leo (fire sign) it is a firearm.

Neptune in the 12th house indicates an angel who protects from all dangers. However, this happens only with good aspects.

Bad aspects bring a vague and mysterious death, often under suspicious and strange circumstances. Neptune is a conspiracy, so death can be the result of a conspiracy or assassination. There is always the danger of water, drowning, alcohol, drugs and poisoning.

All persons who have a badly placed Neptune in this house should beware, because there is always a danger that something will go wrong. The danger is always at night, when there is fog, rain, in dark places. Death in a dream. This is also an aspect of missing persons.

Pluto has a very strong effect in this house. When it is good, it brings the power of survival, and even victory over death, which is why people who have this position of Pluto experience clinical death.

They die, see another world and come back again. Only under good aspects does this planet give great power of regeneration and recovery. In the case of a bad setting, Pluto indicates mass suffering here.

This means that if there are some mass accidents such as plane crashes, shipwrecks, earthquakes, floods, war, bombing, etc., Pluto seems to attract a person to go exactly where the big accident will happen. One should always stay away from all mass gatherings, protests, demonstrations

This house also represents both intuition and vision. People who have personal planets like the Moon, Sun, Mercury, Venus, in this house are prone to some kind of shyness and isolation at the beginning of life.

For example, Nikola Tesla had a pronounced 12th house and the sign of Pisces in that field, which further enhances the power of vision and intuition.

The twelfth field also represents spiritual and spiritual places such as monasteries, ashrams …

It also represents spiritual activities such as prayer, yoga, etc. Shamans, monks, spiritual and spiritual teachers, gurus have expressed this house in natal.

Of course, it does not mean that every person who has a planet in this house is spiritual.

If the planets in this house receive inharmonious aspects, it indicates people who are prone to secret affairs (I don’t mean only in the sense of love).

What is interesting is that a lot of politicians have had and still have planets in this house. Some of them are: George Bush, Bill Clinton, and Tony Blair…