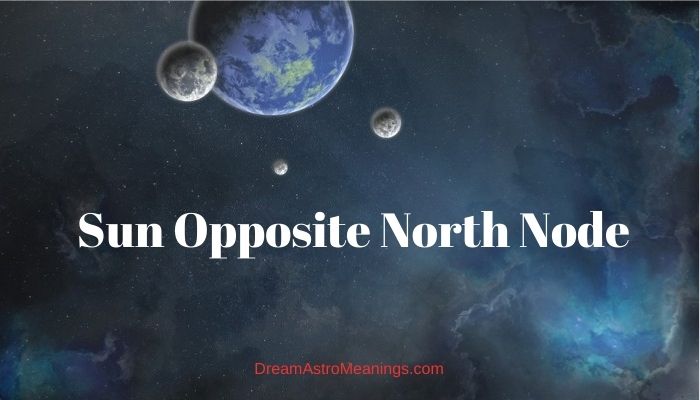 They are like a mirror reflecting an image that does not exist in this place or at this moment in time.

To better understand these celestial points, as well as the source of their interpretation, it is useful to remember that in ancient times the Earth was represented as a winged living creature flying across the sky.

The imaginary creature resembled a winged dragon, the body of which corresponded to the Earth, the flap of the wings – the movement of the Moon, the head of a huge dragon – to the North Node, and the tail – to the South Node; therefore, these points are called the Head and Tail of the Dragon.

In purely astronomical terms, the Lunar Nodes represent the imaginary points of the lunar orbit crossing the plane of the ecliptic, or the imaginary path of the Sun, seen from the Earth.

When the Moon reaches the location of the Nodes, its latitude is zero, since it is on the ecliptic.

It is clear to the child what the impact of the Sun is on people and life on our planet. This celestial body has always been an inspiration on all continents and in different cultures and civilizations.

We all live on the same planet and regardless of external differences, the need for the Sun and the experience when it illuminates us is similar for everyone.

The play of nature between man and the Sun is unrepeatable, and in many cases it was celebrated like God.

In astrology, the Sun represents the central celestial body according to which the Western horoscope is defined.

When we say that someone in the horoscope is Aries, Taurus, and Gemini and so on, we are actually saying that his Sun at the time of birth was in the constellation of the said sign.

At the same time, all the other planets can be in any sign (constellation) at that moment, so in your natal chart you don’t really know where what you are, until your astrologer does it. But the Sun is known.

It represents the basic part of the personality, what everything revolves around and depending on how it is connected with other planets and under which aspects, the personality is formed, and then the character.

The symbol of the Sun in astrology represents a circle with a dot in the middle, it rules the zodiac sign Leo where it is in its seat, in exaltation (delight) it is in Aries, in decline it is in Libra, while in exile it is in Aquarius.

The sun always represents a person, but also a person’s awareness of himself. It is associated with dignity, clarity, courage, creativity, strength.

A well-placed gives a healthy and positive personality, vital and expressive, one that has a sense of honor. Poorly laid (in challenging aspects) brings arrogance, vanity, boasting, selfishness, unconscious bad actions.

It is always an active principle, and in the women’s horoscope, among other things, it indicates what kind of men she is looking for.

“The central body around which the others revolve, the center, the Ego, the radiance, the light, the warmth, the impulse of life, the giver of light and warmth that it has long since seized, distributes generously but retains the lion’s share,

So, there are two lunar nodes in the horoscope: Ascending, North Node, or Dragon’s Head, and Descending, South Node, or Dragon’s Tail. Lunar Nodes in Ancient Astrology It is indisputable that the Nodes were widely known in astrological culture, from China to Greece, since it was the calculations of the position of the lunar Nodes and their cycles that made it possible to predict eclipses.

In the field of classical astrology, Ptolemy talks about the Nodes of the Moon in the 12th and 13th chapters of Book III, which tells about the obstacles of the born, as well as the properties of his soul.

One of his short sayings reads: When the luminaries move towards evil stars, or when evil stars are in opposition to the luminaries, especially if they are located with the Moon in any of the Nodes, the born will suffer some kind of injury, either a hump, or destruction some organ …

Other sayings of Ptolemy give an interpretation of the Nodes. One of them says: If the Moon was with the Moon Nodes, it would strengthen the insight of the soul and make you act more lively.

In Ali Ibn Ridwan’s commentary on the second book of Tetrabiblos, it is said that the Dragon’s head is hot and the Tail is cold. If Saturn is in conjunction with the Tail of the Dragon, this indicates great hunger and cold.

If he is in Pisces, people will experience horror, fear and lack of fish, and great pain and longing will reign among believers.

The Centiloquia, or one hundred aphorisms of Hermes, written around the 4th century, says: Gemini and Sagittarius obey the Dragon’s Head and Dragon’s Tail more than all other signs, and therefore the Nodes of the Moon bring more misfortune in these signs. In the 65th aphorism it is said: The Dragon’s Head does terrible evil, for with bad planets this evil grows.

On the contrary, it is a great blessing, for her kindness grows with benefic planets. The Dragon’s Tail, on the contrary, is opposed both in position and in meaning to the Head.

The moon is a small luminary, the ruler of the Ascendant of the world; it is similar to a person, especially at the beginning of its inception, conception and in its subsequent slope, descent.

After all, it appears small and grows, receiving the light of the Sun, until it reaches its opposition, and if one of the two Nodes is in this place, then its eclipse occurs.

Also, the Moon eclipses the Sun when it forms a conjunction with it in one of the two Nodes. It is because of this solar eclipse that dishonest and vile people rise up against their kings and masters, insult and humiliate them; so the despicable rabble rises and kingdoms collapse.

The knot theory from the point of view of Ben Ragel One of the first aphorisms rewritten by Ben Ragel, which provides much more ancient information, reads: In this first statement about the Knots, Ben Ragel explains to us their qualities and from here begins to endow the North Node with the good properties of Jupiter, Venus and Moon, while likening the South Node to Saturn, Mars and the Sun.

The use of Knots in classical astrology has gone much further than the interpretation of human fate and temperament, since it was also used for other life needs, not related to a person, but to his environment.

These two points are always in exact opposition to each other. This is mathematically understandable. Imagine a sphere with two different circles passing through the poles.

It is clear that they will intersect with each other at the poles diametrically spaced from each other on the sphere. You can also mentally imagine a dragon elongated in an arrow: its head and tail will always be at opposite ends.

By the way, the engraving “Dragon devouring the Sun” is related to this dragon, the dragon named Luna. And it demonstrates to a greater extent the ignorance of contemporaries than the superstitions of the ancients, for these engravings are not artistic, but teaching aids on astrology.

How important Rahu and Ketu are in astrology, you can understand from the fact that the Hindus believe there are only 9 planets in our space: the Sun, Moon, Mars, Mercury, Jupiter, Venus, Saturn, Rahu and Ketu.

As you can see, the two mathematical points here are equal in rights with the seven real planets. The Indian astrological ring “9 planets” contains two stones related to Rahu and Ketu. Rahu corresponds to the stone hessonite (in India it is called “gomed”), and to Ketu the cat’s eye.

Since Rahu and Ketu are always opposite each other, always at 180 degrees, they can, in essence, be considered one figure. In this sense, the word “Nodes” is quite convenient.

Interestingly, in Indian mythology, at first there was one whole demon named Rahuketu, and only then he was cut in two.

Two words must be said about signs. A person with Rahu in a sign manifests as this sign.

For example, a person with Rahu in the 11th house in Virgo takes part in collective work, collective discussion, namely, clings and finds fault with the team members. I will not list all the signs, you know them.

The last important point: when analyzing aspects with planets, be sure to look at the strength of the planets.

A hint about the meaning of the Nodes is contained in their graphical representation.

For example, Ketu uses paper at the printing house, while Rahu gives out printed books and magazines.

For a student, Ketu is what he is taught, and Rahu is what he knows. You can build an infinite number of examples yourself by applying this principle.

Rahu in a person’s horoscope indicates what he is active in, what he is “out” in.