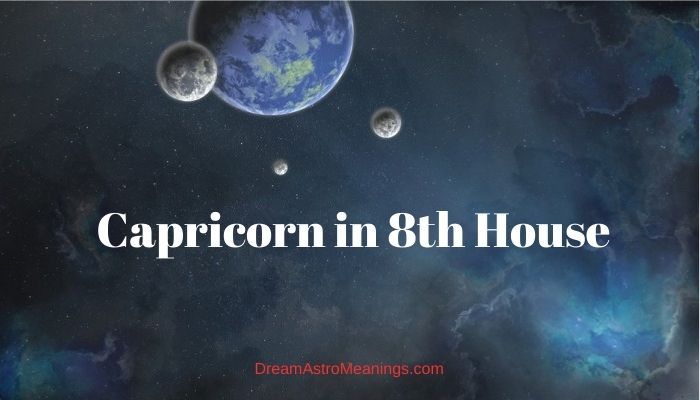 Traditionally, in astrological practice, it is believed that the main external dangers for the owner of the 8th house in Capricorn are falls from a height, collapses, destruction, something falling from above, when something falls on Native or floods it (the roof may collapse, crush the press, fill up with sand, etc. etc.).

An earthquake or the fall of a tree or a piece of a roof as a result of a hurricane is also a direct signification of Saturn. Among my Natives there are, for example, those who fell off the cliff (Mountains – Capricorn, fall – Saturn).

The first seven years of life can be quite problematic for them, but they do not give up easily, so they can live to a very old age.

Capricorn is responsible for skin, bones, joints, knees, teeth. They rarely complain of pain because they have an extremely high pain threshold and strength comes from the way they lead their lives.

Their disadvantage is that they are not treated in time when they feel the problem. They can often be prone to joint inflammation, bone fractures, lumbago, rheumatism, anemia, neuralgia, poor circulation, bile and kidney pain, anorexia, mineral deficiencies, and mental illnesses such as paranoia, phobias, and depression. He needs everything that strengthens self-confidence and self-awareness.

Emotional problems manifest in the form of eczema, herpes and ulcers. The advice is to take protein, calcium, phosphate, cabbage, cucumbers, almonds, figs, plums, strawberries, blueberries, which improves the condition of bones and the whole body.

As he likes to analyze and with already known ambition and perseverance we can find them in almost all spheres of work as a conscientious worker. They are seldom in a subordinate position and, given their responsible attitude towards money, they are the best at dealing with material goods.

Capricorns are a bit melancholic and have a need for organization and work because they deeply believe that they are worthless, so they have to constantly prove themselves.

Once they realize that they only need to love themselves, all the doors will open for them, they will look at the world with different eyes and enjoy the charms of life without feeling guilty. Capricorn is in dire need of financial and material security.

This is the force that guides them and that hides behind their ambition. All their qualities are woven from the desire to succeed.

Public appearance and prestige are very important to them. Although they are lonely, Capricorns need others to appreciate them, although they hide this trait very well. Capricorns are self-sufficient and have many faces. They are known to be indifferent and uninterested.

However, these traits are hidden from the world, which is why, unfortunately, many Capricorns do not know who they really are, which is why they are insecure in themselves and constantly question their value.

Capricorns find it difficult to establish emotional intimacy, because once they let someone into their life, they do not want to separate from him later. Emotional relationships make them vulnerable and satisfied at the same time. This is an eternal conflict within the contradictory Capricorn mind.

Seeing the same readings in the map, we must warn Native (and even more so if it is a child) about the need to exercise maximum vigilance in all matters related to height and depth and an unstable or emergency surface.

Almost all mothers tell their children that you cannot step on wells, and of course this is true for everyone, but for the owners of Capricorn, Scorpio, Pisces and their rulers in the 8th house, this will be even more relevant.

But not everyone explains that the collapsed asphalt, especially if from under it “water is oozing” – is no less dangerous.

Signs of the incipient collapse of any structure should also be regarded by the owner of Capricorn or Saturn in the 8th house as an indication of an imminent threat. The child should be told repeatedly that it is impossible to enter the crumbling buildings!

Even on the same excursions – be more careful about labyrinths, caves, crumbling buildings. Remember – Saturn is not Jupiter. For breaking his rules, Saturn takes quite a lot (he is experience – the son of DIFFICULT mistakes!).

Saturn is the significate of ice and everything cold in general. Again, this must be understood broadly – on the one hand it is clear – the danger from hypothermia and everything that generates cold.

For example, the connection of Saturn / Uranus in the 8th house – can shock when repairing the refrigerator J (although there are also sockets and wires (Uranus) in the wall (Saturn)).

If this person becomes magic, then he will be able to achieve great practical triumphs. This situation promises a long life and a peacefully passing death. However, this person does not easily humble himself with old age, but death he is waiting for.

It has an innate gift to the economy, therefore it is successfully used by other people’s money. It is not uncommon for such people to be identified by lucky booklets or bankers in large companies.

The main problem of their life is the ordering of the system of material and spiritual values. In collisions with adversities and troubles, this person displays an exceptional response and uncommon boldness.

There are no more cautious and suspicious people than those born in the sign of Capricorn, but also, none of them is more persistent and methodical in achieving the desired goal.

Stoically, they will endure some losses and almost ascetically stubbornly suffer all possible restrictions just to be able to achieve what they set out to do, whether it is work or love…

The best friend of people of this sign is time, because they always have time to wait and finally reach their five minutes, while their strongest weapon is patience, thanks to which they always reach the goal, after many others before them have long ago “raised their hands” from everything”.

The 8th house in Capricorn means that such a person is distinguished by his ability to stay in possession of inheritance or shared ownership.

He starts to charge everything that only can be offended, and to those who need to provide the company with compensation. If his wife does not receive the share of the property that is suitable for him, then he will strongly overstep.

Upon receipt of property, legal disputes and delays in legal operations are possible. The 8th house in Changes in the life of this person go hard and for a long time.

The problem of dismissal or marrying can last for years, without requiring an understanding of something that is clearly not given to him, or even the amount of flexibility and energy As a result, he chooses to simply wait.

However, he does not need to either lazy or hurry in the crisis.

He must carefully and attentively attain the knowledge of fate and work harder, creating all the mandatory conditions by hard work. Deep strains and complexes are possible, connected with the feeling of “I” at the bottom of the deepest wheel, from where it is never able to get out.

Therefore, it is extremely important to provide the right environment, which will contribute to the development of strong and positive qualities. Or else it is necessary to pump individualism into oneself, allowing one to react to the external pressure and not to give in to the general currents.

Such a person will be able to resist the crowd, but take the best of what it offers. However, the main goal of these transitions is to stimulate religious development.

Specific symptoms and problems must be interpreted as signs that determine the nature of a spiritual dead end. During the lingering pressures, there is likely a deep oppression of the individual, leading to a loss of vital forces.

During such periods, it is incredibly difficult to cope with forces and start acting. Therefore, the pressure is supported by problems at work and the unwillingness of a brother to work. If the apathy lasts a long time, then there is a risk of being deprived of work.

At first, a person enters public life for a long time, but already after he considers group ethics as a basis for personal. It serves for a long time, correctly and faithfully. Relates to occultism in a deliberately, purposefully and materially-pragmatic way.

All the good that this quiet and inconspicuous creature sometimes gets (seemingly on a platter) absolutely deserved, because believe me, it is certainly an abundance of self-denying and almost ascetic work and effort, which usually no one around them noticed, because they never and by no means do they want to emphasize and draw attention to themselves.

It is a sign whose element is earth, cardinal qualities and female polarity. They are thoughtful, organized and methodical, but also ready to act effectively and constructively whenever they are given the opportunity.

Namely, they always go to safety, after careful analysis and assessment of all existing circumstances, because in this way they usually achieve maximum efficiency with minimal losses.

They excel at estimating the right moment to act and will never go to a “war” they can’t win. They are able to deploy their forces and potentials almost perfectly and mobilize them in order to fulfill their current short-term or long-term ambitions.

The bad thing is that due to the strong focus on the goal, they are able to subordinate everything else in their life, which will inevitably distance their loved ones or partners.

Yet most modestly step from bottom to top, diligently skipping one step at a time of obstacles that separate them from the desired success in what they are doing.

Capricorn, of course, unlike Leo, does not want to succeed because of fame and publicity, for them success has quite tangible and material value and measurability. Like other signs of the earth element, possession (of money and material goods) gives them a sense of security and purposefulness of existence.

These are concrete people and also very effective, who are always in favor of moving from words to deeds. Reluctant to “towers in the air”, as well as wasting time on fantasies that have no foundation in reality, Capricorns are not afraid of hard work and the long road ahead of them, because they know that even the longest begins – the first step.

Before they go they will think well, but when they go, no one and nothing will discourage and stop them. Those born in this sign have a strong sense of responsibility and once you accept it, you can rely on them.

But don’t even try to take advantage of them, because despite successfully controlling emotions, their logical minds are able to grasp other people’s motives very quickly, and given that respect on their scale of values ​​is at a very high place, once you lose it, there is no going back.

This “malice” will hardly forgive you (and forget) the injustice done.

On the other hand, their tendency to loneliness is a reflection, among other things, of either insecurity or loss of control over people, situations or their own lives.

Traditional and often extremely conservative, Capricorns are like wine, the older the better.

In their youth, they accept many responsibilities, they are more serious than their generation, and some of them start giving up at an early age in order to perfect some special gift and ability.

But in their mature years, they often experience a kind of “second youth”, because when many of their generation become serious, pressured by the burden of life obligations and responsibilities, they discover their other, cheerful and witty side and their always young spirit that has existed all this time, hidden under the armor of discipline, fear, caution and responsibility.