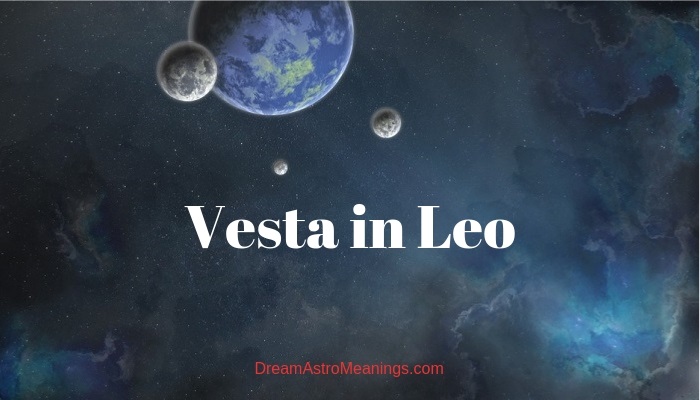 Vesta is the fourth in line discovered asteroid. It is also the second heaviest one. Its discovery dates back in 1807. Vesta is known for the two giant craters on its surface which are believed to have been caused by strong collisions from billions of years ago.

We have found meteorites from these collisions on the surface of the Earth. Vesta is the brightest asteroid seen from the Earth.

The name of this asteroid came from the name of the ancient Roman goddess Vesta. She was the goddess of family and home. She was also the protector of the Roman people.

This goddess was represented rarely in a human form. Her symbol was the burning fire in her temple. Vesta temple was in the Roman forum and only the Vestal virgins which were Vesta’s priestesses were allowed inside.

Men were never allowed to enter the temple and women were only allowed once a year during the holidays of Vestalia which were dedicated to the goddess Vesta.

Vesta was considered as one of the most important goddesses in the Roman pantheon. The Vestals were obliged to keep the sacred fire in her temple burning because that ensured Rome’s protection from harm.

It was strongly believed that extinguishing the fire would cause something bad happening to Rome, and that is why the ones who neglected their duties were severely punished.

These girls needed to consent to be virgins at least 30 years, after which time they were given their freedom. It was an honor, but also a great sacrifice to undertake the role of a Vestal virgin in ancient Rome.

The goddess Vesta was considered the cleanest of all the gods. She was depicted as a virgin, but was also considered the goddess of fertility to which the women who were infertile or weren’t able to have children preyed to.

The Vestals performed rituals to enhance fertility as well as a good harvest.

In astrology, Vesta symbolizes the way we confront the issues we encounter regarding our work, devotion to someone or something, our integrity, the need to sacrifice something or someone, as well as refraining from personal relationships and intimacy.

Vesta is the ruler of psychical conditions caused by refraining physical intimacy and personal relationships. It also reveals the issues we have because we lack or fear intimacy.

The placement of this asteroid in a certain sign or house in our natal chart indicates which areas we need to put our focus on. It also indicates the people and situations we should get rid of from our lives.

Vesta also shows the way we deal with our physical needs and our passions, that is, whether we suppress them or exhibit them openly.

Vesta also shows our devotion to something or someone, like a project, a person, belief, cause, etc. This asteroid also indicates the areas where we tend to ignore some issues or we choose not to speak about them and share them with others.

These areas are usually very important for us, but we somehow lack good fortune and keep having trouble.

The asteroid Vesta gives us the needed persistence to keep our focus on our goals and resolve the issues we encounter along the way.

Men with Vesta in Leo are usually very creative and talented. They have a big heart and are open to helping others.

These men can sometimes sacrifice their passionate and intimate side of personality to fully express and use their creativity.

They can in some cases behave egotistically and demand to be in the center of attention which can cause issues in their relationships with other people.

These men are charming and very romantic. They prefer partners who exhibit the same traits.

Women with Vesta in Leo openly express their love and are born romantics.

These women are very creative and enjoy expressing their personality in some creative manner.

They are very proud and sometimes can appear as being full of self-importance which can irritate the people around them.

They need to work on lowering their pride and arrogance so that they don’t jeopardize the relationships with other people, especially the ones they care about the most.

Some of the good traits of Vesta in Leo are romantic, creative, open about their feelings, creative expression of their personality, original, proud, focused on their achievements, enthusiastic, etc.

Some of the bad traits of Vesta in Leo are arrogance, self-importance, irritating, egoism, refusing to accept or consider other people’s opinions, etc.

Vesta in Leo people are at their best when they are given the space and limitless freedom to do things their way.

They are very original and creative and the areas ruled by Vesta in their charts are the areas where they can reach the maximum of their potentials.

They are proud of their achievements and are able to focus on their work until they finish it and achieve success.

They can be overly arrogant and proud which could harm the people who are in their vicinity, and ruin the relationships with others.

In close relationships they express a great dose of romanticism and admiration.

They also prefer partners who exhibit that kind of behavior. In some cases, extremely creative individuals with this placement of Vesta could be prone to negate their reproductive energy and passion, or even transmute them into creative endeavors instead of living them.

These people are usually very artistic and enjoy expressing themselves in a creative manner.

They are also very enthusiastic and full of love. They are born romantics.

They can behave egotistically, and refusing to accept or even considering other people’s opinions. They are devoted to their work and give themselves to every endeavor from the heart.

People with Vesta in Leo are original individuals and usually very creative.

Almost every one of these people has the need to somehow creatively express their individuality and uniqueness.

Some of them can exaggerate in their expression of originality, and can appear arrogant and egotistic.

Many of these people have an egotistical nature and refuse to accept anyone’s opinion.

They are very romantic and openly express their love.