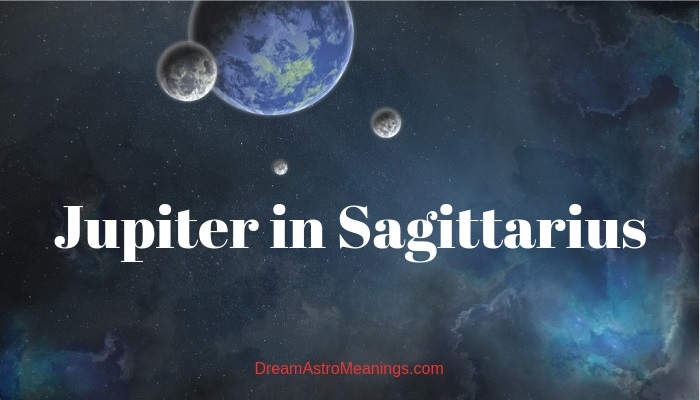 Jupiter is a planet giant. It is the largest in our Solar system. This planet’s mass is 2.5 heavier than all other planets combined. Earth is 318 times lighter than Jupiter. That is how gigantic this planet is. This planet lacks solid ground and is composed mostly of hydrogen.

The Roman god Jupiter gave this planet its name. The god Jupiter ruled thunder and the skies and was a much-respected deity in the Roman Empire. In fact, the Romans considered it the king of all gods. Jupiter is the equivalent of the Greek god Zeus.

Since antiquity, Jupiter was considered a very beneficial planet, a bringer of good fortune and wealth into a person’s life.

Jupiter rules the signs of Sagittarius and Pisces and it has its greatest effect when placed in these signs. It is exalted in the sign of Cancer, and there too has great power.

Jupiter in general has a beneficial effect on people’s lives (unless it is severely badly placed) and helps people achieve their desires and attain material wealth and financial stability.

The amount of effort a person puts into earning money depends on the position of Jupiter in the natal house as well as the aspects it is making with other planets. When Jupiter is well placed in a natal chart that can be considered a true blessing for the person because it eases their life and makes earning money easy.

These people are usually financially well-off and have no struggles with money. Good Jupiter in a natal chart provides protection for a person’s life and a lot of opportunities for progress and desired achievements and a substantial financial reward for their efforts.

Badly placed Jupiter doesn’t have to indicate disastrous events in our lives (and sometimes it might, if particularly badly placed) and usually manifests as lack of good opportunities for advancement and financial gain.

Jupiter takes a whole year to go through a sign. That means that all people born within that year have Jupiter in the same sign and share its traits. Because of that, when determining the influence of Jupiter on a certain person, besides its sign, it is important to take into consideration Jupiter’s placement in a house of the natal chart as well as the aspects Jupiter is making with other planets in that chart.

Unlike these, so-called social planets, personal planets like Moon, Sun, Venus, Mars, and Mercury, all transit through one zodiac sign in a much shorter time span and have a significant influence in shaping an individual’s personality.

This text talks about the traits of people born with Jupiter in the sign of Sagittarius.

Men with Jupiter in Sagittarius usually have very optimistic and joyful personalities.

These men (like women with this placement) are usually well-educated and interested in expanding their knowledge further. They are often blessed with fortunate opportunities to achieve their desires, and things seem to just fall into place whenever they decide on doing or achieving something.

They can become overwhelmed with the seemingly endless stream of good luck, and stop putting in any kind of effort, but expecting things to fall from the sky for them. They usually do, but there are some situations in their life when luck turns its back on them, and they are left with the need to deal with the consequences of their reckless actions.

They are usually spiritual beings, and although they don’t appear that way, have a deeper knowledge and interest in the mysteries of the Universe and life in general.

They have an adventurous nature and are attracted to professions where they can experience it. They are fond of traveling and they usually travel often for business or pleasure.

Jupiter usually blesses them with fortunate opportunities and luck in all Sagittarius related areas.

These men are often in the business of foreign trade and foreign affairs through which they can earn a lot of money, especially if Jupiter is in good aspects with their Sun and/or Pluto.

These men are often in the legal profession. They are also successful in professions related to travel, such as travel agents, organizing travel, or being owners of travel agencies, etc. Many of them end up in the military or the navy and reach high officer positions there.

If Jupiter has a bad placement in their chart, they can be prone to indulging in pleasures way too much, drinking, taking risky actions and relying on their luck to get them out, etc.

They can also be prone to overspending and jeopardizing their financial security.

Women with Jupiter in Sagittarius are also very optimistic and always expect the best possible outcomes of their actions.

They can also be prone to relying overly on their good luck, forgetting to pay attention to important details and having blind faith that things will somehow work out fine.

Jupiter blesses them with good opportunities in the areas ruled by Sagittarius and they often choose to be in these areas through a natural affinity they have for them. These women are successful as lawyers or judges, or have some other occupation within the legal profession.

They are also very fond of traveling and often make a career of that love. They can be successful as flight attendants, travel agents, and some of them earn their living as owners of travel agencies.

They are often attracted to teaching others, and they could be successful professors or teachers. Some of them end up being successful TV or radio hosts.

Some of the good traits of Jupiter in Sagittarius are:

Some of the bad traits of Jupiter in Sagittarius are:

– prone to overindulging in things, hedonists, absentminded, not concentrated, spendthrifts, prone to spending recklessly or making reckless financial decisions, relying too much on their luck, thoughtless, etc.

In Sagittarius, Jupiter is at home. Sagittarius is the sign ruled by Jupiter and when placed in this sign, Jupiter has the most beneficial power and influence on a person’s life.

People with natal Jupiter in Sagittarius, are born optimists and always expect some fortunate outcome of their actions. They are bold and often prone to taking risks when it comes to financial investments and endeavors.

Being blessed with good fortune they usually rely on, they end up being successful in their efforts.

These people don’t have to put up a lot of effort to make some gain, and they sure know how to use that fact. They often don’t need to knock on doors, they open before they do that.

Having too much luck can sometimes be overwhelming. One of the possible issues these people could experience is the potential for overindulging in the benefits this planet is offering.

They could become lazy and stop putting any effort into the achievement of their goals.

When Jupiter in Sagittarius is placed in a natal house which diminishes its power or makes bad aspects with other planets in the chart, these people could experience situations where their luck turns its back on them, leaving them on their own in a desperate situation.

One of their main problems is being overconfident in their luck.

They tend to put themselves in dangerous or risky situations hoping things will turn out in their favor, as they usually do, but there are some situations, especially with badly placed Jupiter in their charts, when they end up bear severe consequences and damage because of their thoughtless and risky actions.

In some cases when Jupiter is severely badly aspected, these men can begin spending way over their means, putting themselves in financial jeopardy and in some cases causing their bankruptcy.

These people are often focused on the whole picture and forget the details which could in some cases be of crucial importance for the success of their actions. They tend to be absentminded, expecting things will work out somehow without them worrying about the details.

This ability to see the bigger picture of things can sometimes be very useful, especially when they need to make a general conclusion based on different information.

They are usually highly educated and knowledgeable. They often have a gift to teach others about the knowledge they have and are often professors in universities or have another way to teach, like lecturers, preachers, etc. They are often fond of philosophy and chose it to be their profession.

People with Jupiter in Sagittarius often have relations with foreign countries. These people love to travel, both for work or pleasure reasons. They are often found in the international trade business as well as other foreign related affairs.

These people are often in the travel business, as owners of travel agencies, flight attendants, pilots, etc.

These people have an adventurous spirit and love to explore. Some of them choose it to be their occupation. They are often found in the legal profession as judges, lawyers, and other legal staff.

They often choose a religion to be their calling, and devote their lives to the church, often earning their living as priests or religious preachers.

Although they might appear lightheaded and disinterested, these people are often very spiritual and have profound knowledge and understanding of the Universal Truths.

Jupiter also blesses them with good luck in the fields of publishing, editing, broadcasting, and similar areas. They can be successful television and radio hosts with a lot of followers.

Because Jupiter goes through one sign during a period of one year, generations of people born within that period share the traits of Jupiter in that sign; that is why it is important to consider all the details about Jupiter’s placement in the natal chart, the sign, the natal chart house it is in, and the aspects it is making with other planets.

People who have Jupiter in Sagittarius are usually the ones we consider super lucky.

These people usually don’t have to put much effort to get where they want. In most cases, things seem to fall into place for them. They are usually successful in all Sagittarius ruled areas.

One of the main issues they could experience is their tendency to become overly dependent on their good fortune and stop putting any kind of effort, or not thinking enough before taking action.

With such behavior, these people consciously risk possible things unfolding badly for them, but hoping they won’t and that they will get the outcome they desire. In most cases, the scenario looks like that, but there are cases, where their lack of any kind of caution and thinking before acting could cause great damage and put them into jeopardizing position.

These people usually have more fortune and opportunities than others, but they should be careful not to succumb to a feeling of overconfidence and relying simply on their luck instead of their thoughtful and well-planned actions.