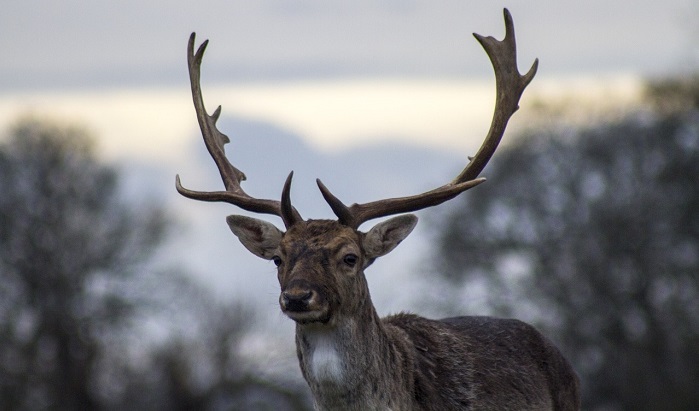 Deer are hoofed mammals from the family Cervidae. These animals had a significant role in the history of the humankind. It is believed that the evolution of deer lasted around 30 million years.

They live in different habitats throughout the world from the tundra to the tropical rainforests. Many deer live in areas between forests and savannas. They need grassland as well as forests to survive. Deer are present in all continents except Antarctica and Australia.

The largest deer is the moose, with nearly 2.6 meters in height  and up to 800 kg in weight.

Deer color varies between red and brown, with some exceptions. Their coat is adjusted to the climate they live in. They molt two times a year, to change the thick winter coat for a lighter summer one.

Deer have long and muscular legs. They are excellent swimmers and jumpers. They are ruminant animals.

Almost all of them possess a facial scent gland which releases a scented pheromone they use to mark their territory. They have a good night vision. The deer’s antlers are considered their sexual characteristics and are used to ensure reproductive success through selection by the females and for battling with other deer.

The deer with heavier antlers have a higher hierarchy status than the ones with smaller antlers. These males are more aggressive and dominant over others. Bigger antlers are considered a sign of the genetic quality of the male.

These animals feed primarily on leaves. They require a diet rich in minerals like phosphate and calcium to help their antlers growth.

The feminine of deer is the doe. Their offspring are called fawns. These animals belong to the uniparental species, which means that only the mother takes care of the young.

The pregnancy period usually lasts up to ten months, and the doe usually gives birth to two fawns. The fawn takes its first steps in the first twenty minutes of its life. The mother licks the scent of the fawns to protect them from predators. After one week of hiding in the grass, the fawn is strong enough to follow its mother. 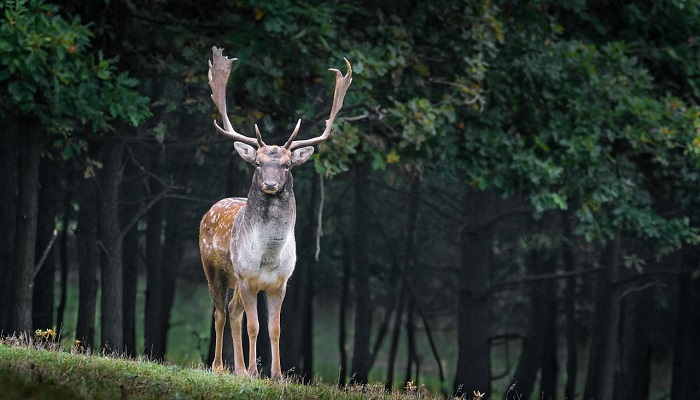 They stay together around a year. The male deer, which are called bucks or stags, leave the mothers and never see them and their fawns again. Females sometimes form small herds with their fawns.

What does a Deer Symbolize?

The deer is a powerful animal and a powerful totem. It has many different meanings and combines the traits of strength and determination with gentleness and calmness. The deer symbolizes the power to go through obstacles without anger and fear, instead of with patience and grace.

It also symbolizes innocence, gentleness, intuition, sensitivity, vigilance, agility and being able to change your direction instantly, the ability to regenerate and be new again.

This animal is a symbol of spiritual authority and superiority in many cultures. It is also a symbol of regeneration, devotion, piety, power, timidity, fertility, speed, harmony, longevity, happiness, kindness, peace, gentleness, wisdom, spirituality, etc.

There are many terms used to describe terms related to deer, and you most likely don’t know the meaning of all of them.

For example, you have probably heard about the term stag and you wondered what does stag mean. If you want to know about stag meaning, the answer is very simple; the stag is a male deer. The term especially refers to male red deer after the fifth year of its life.

You have probably many times heard about venison and you have asked yourself: what does venison mean. The answer is simple, venison is deer meat.

If you wonder about antlers meaning, the answer is: antlers are the branched horns of an adult deer, usually a male deer. The antlers are made of bone. They grow and are cast out every year.

A mythical deer is a term often referring to mythological hybrid creatures which incorporate deer body parts or attributes.

If you have ever wondered what a Celtic stag means, you should know that a deer, especially a stag has a very special place in Celtic mythology. The Celts considered the stag a symbol of the forest. It is depicted with antlers which resemble the branches of a tree and looks as if it is carrying the forest on its head.

Because of its traits, such as speed, power, especially sexual power and agility, as well as shedding of its antlers in the autumn and growing them again in the spring, the stag for the ancient Celts symbolizes the energy of nature, especially the forest, which goes through cycles of regeneration itself.

One of the gods related to stags the Celts worshiped was the Cernunnos, the god with the stag horns. This god is usually depicted beside a stag or stags. In some carvings he is depicted beside a bull and a stag which are drinking from a stream of coins, which led to beliefs that stags symbolically represented prosperity and abundance.

The stag was also associated with hunting, mostly because it was an animal considered very important for everyday life and economy of the ancient Celts. The stag’s meat provided them with food, its skin with clothing and coverings, and their bones with tools and weapons.

The stag was also considered a symbol of male fertility, as well as the fertility and renewal of nature.

The Celtic tradition also attributed two aspects to the deer: the feminine and the masculine.

The feminine element (Eilid in Gaelic), was symbolized by the female red deer and symbolized grace, femininity and gentleness. In myths and legends deer often turned to women to escape being hunted. The masculine element (Damh) was a symbol of the forest, independence, pride and purification. The red stag was depicted as the ruler of the forest and protector and provider of all creatures.

The stag was very honored and respected by the Celts, and its symbolism has held on up until modern times.

A white stag is a mythological creature which symbolically represents something we desire, but it is out of our reach. Seeing a white stag for a human being was considered an event with incomprehensible consequences, provoking major spiritual changes within the person and evoking significant events for humanity.

Although the white stags exist in reality and its white color is caused by leucism, which is a condition that causes their skin and hair lose their natural color, it is a rare occurrence and represented a sighting with mythical proportions. There are major myths and legends from ancient Babylon, Assyria, Mesopotamia, China, Japan, etc. where the white stag is depicted.

In Celtic mythology the white stag symbolizes the Otherworld and its forces. It was considered a bringer of major changes to people who encountered it. It often appeared when some sacred laws or rules were broken.

Many people love having a tattoo of deer or deer antlers on their bodies. Besides their beauty, these tattoo images have a special symbolism as well.

Deer and deer antlers could also be a symbol of stubbornness, decisiveness, perseverance and determination. They could also symbolize creativity, emotions, freedom, expression, prosperity, abundance, as well as fertility.

People who enjoy standing out from the rest of the crowd often choose to have a tattoo image of a deer or deer antlers on their bodies.

The Deer Meaning as a Spirit Animal

The deer totem can have many different meanings. Here are some of them:

Graceful determination. Deer have big and dangerous antlers which can seriously injure and even kill their opponents. These animals on the other hand have a gentle nature and use them only as their last mean of defense. This totem animal is teaching you to stay calm when the situation is difficult and trust in your powers to overcome any obstacle. You know that you have enough determination and abilities to achieve what you desire.

Regeneration. The deer sheds its antlers every autumn and grows a new set again. Because of this ability it is considered a symbol of regeneration and renewal of life. With this animal as your totem you are most likely a person who rises from the ashes anytime you experience something bad. You don’t let the circumstances block you from following your path.

Timidity. Although big in size, deer are mostly timid animals and tend to run away if they feel someone’s presence. If you have a deer as your spirit animal, you most likely have a trait of timidity, which the deer totem teaches you to overcome.

Intuition. The deer totem animal gives you the gift of intuition and inner guidance. It teaches you to rely on your gut feelings when you need to take some important action or make an important decision in your life. With the deer as your totem, you are most likely very intuitive and instinctively know what to do or say in every situation.

Vigilance. Deer are very vigilant animals. This totem animal is teaching you to pay attention to the circumstances around you. That approach will help you always to be prepared for any situation. 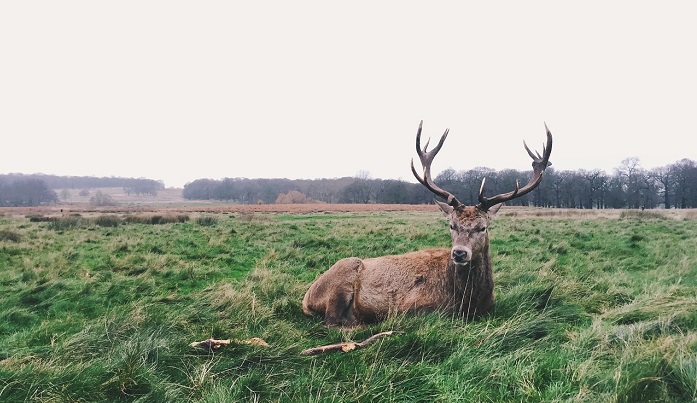 Deer as Your Totem Animal

The deer as your totem animal gives you many powerful traits. The deer gives you the power to overcome gracefully any obstacle you come across. With the deer as your spirit animal you are most likely very intuitive and sensitive.

You have a gentle but determined approach to people and situations.

You are agile, vigilant, you trust your instinct and your intuition and you are not afraid to confront any danger or difficulty.

This totem animal gives you the strength and endurance to go through hardships and get out as a winner. You are able to accomplish any goal you can imagine, and you are confident about your abilities to do that.

You are a very gentle and kind person. You instill harmony and peace among those around you. You know how to use these powers and help others, especially the ones with the wounded hearts. You are a compassionate being and people enjoy being in your company. You have many true friends who respect you and appreciate you.

With the deer as your totem, you most likely enjoy all forms of art, mostly music and poetry. You have an eye for details and you are a sharp observer.

What if the Deer Appears in Your Life?

When a deer appears in your life, it could be a reminder not to be overly critical and hard on yourself. Accept the circumstances as they are and move forward.

This totem animal often appears when you have some fears and concerns you need to deal with. It helps you dissolve them and realize they are only caused by your vivid imagination.

Deer often remind us to rely more on our intuition and inner guidance.

The deer often appears in our lives to announce a period of peace and harmony that is expecting us. We only need to relax and enjoy.

When to call on Deer?

You should call on deer as your spirit animal when:

Dreams about Deer – Interpretation and Meaning

Dreams about deer are not common dreams. When a deer appears in your dream it might be asking you to begin listening to what your intuition has to say to you. It might be a warning about somebody from your surroundings who doesn’t have good intentions towards you.

Chasing a deer in your dream could be a confirmation of dealing successfully with some fears you have. If you dreamed of being a deer which was chased by someone, the dream isn’t a good sign, meaning that you try to escape and run from your fears.

A deer in a dream could also symbolize some sacrifice you are making for someone. It could also indicate some person from your surroundings with some traits of a deer, like timidity and gentleness.