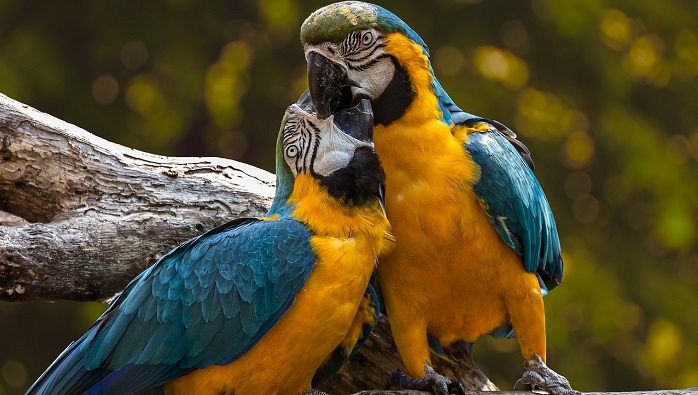 Parrots are beautiful and intelligent birds’ species that have been held as pets since ancient history times. Historical data suggest that Ancient Egyptians were probably the first ones who adored parrots simply for their amazing colors and appearance and had them as fancy pets in their homes.

Parrots are synonym for exotic, attractive, eye-catching and luxurious, especially, of course in parts of the world where these colorful species are not a native breed.

Egyptian hieroglyphs prove parrots were amongst five bird species Ancient Egyptians were familiar with; those hieroglyphs clearly depict parrots. These fascinating birds were adored by Greeks and Romans, as well.

They have also thought of parrots as strangely beautiful and rare birds, so rich families would often boast with having such a luxurious bird in their villa. In wealthy Greeks and Roman homes, servants would take special care of parrots and teach them human talk.

It is supposed that the first one who has introduced parrots into European countries was no one else than one of the most notable historical warrior rulers, Alexander the Great himself.

According to history, he was amongst the first ones to do so and it had happen somewhere about the late fourth century BC. Once European travelers have discovered Americas, they found out native people there grew parrots as domestic animals.

European fascination with parrots made people take these exotic birds across the ocean, to noble and royal residences on the continent.

Many evidences suggest parrots were something extraordinary in old times. Notable historical figures are known to have had parrots in their homes. Christopher Columbus brought a pair of Amazonian parrots as a gift to Queen Isabelle, while one of the most notable English rulers, Henry VIII, had an African grey parrot at Hampton Court.

Later on, traveling through history, parrots were being taken to Europe in greater number.

Since old times, these exotic birds have become popular pets in people’s homes, regardless of their social and material status. To put it simply, these luxurious pets have become more affordable.

Not only parrots are our pets, but they have also been an incredible inspiration for artists, poets and others. 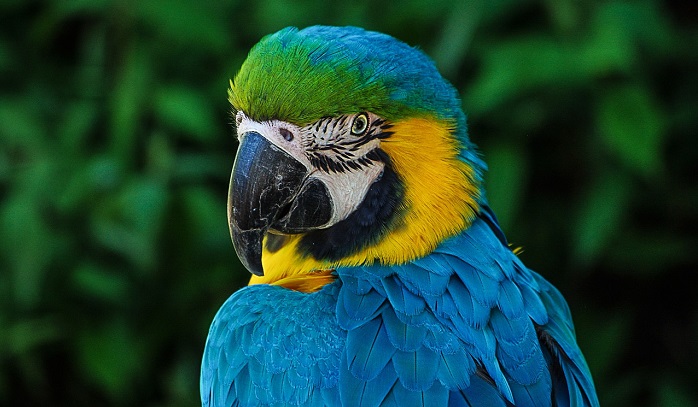 Parrots are songbirds, but, depending on particular breed, they could produce various types of sounds.

Not all parrots produce melodic and pleasant sounds, on the contrary. Certain species could imitate sounds from their environment, which makes us think parrots can talk and understand us in human way.

However, they are only great learners, imitators and interpreters. Parrots are intelligent birds, in terms of the animal kingdom.

These exe-catching birds vary in sizes and colors. Most of them have bright, vibrant and shiny multiple colored feathers, while there are some that are of only one color. All parrots are easily noticeable and they simply look impressive! Larger species are known to have the ability to learn to imitate human talk.

For example, African grey parrot is known for this ability.

Parrots are considered one of the most intelligent bird species. They are not only capable of learning and imitating sounds, but parrots are generally resourceful and clever birds. The most notable parrot species, known for their intelligence, are already mentioned grey parrot, blue macaw and cockatoo.

Parrots are friendly and they easily adapt to living with humans. Some of them develop special bond with their owners.

In symbolical sense, parrots represent many things. Parrot symbolism developed in European world and parts of the world related to the same point of view, is based upon the fact these birds look different from any European species.

They are of vibrant, eye-catching colors and the can even learn to talk! This makes parrots extraordinary and exotic, thus their symbolism is associated with the idea of something exceptional.

In that sense, parrots symbolize eccentricity, luxury and richness. Once upon a time, it was considered a luxury and these special, amazing pets were reserved only for high society.

Even today, certain types of parrots could only be found in wealthy homes. Parrots were a kind of status symbols; therefore, they symbolize style, high class, royalty, nobility, richness and well-being.

Parrots also represent something that is at the spotlight, something eye-catching and easily noticeable. Parrots symbolize attraction, pride and self-confidence. Because of their beautiful colors, parrots are great inspiration for artists.

It is not strange that these birds are commonly used as a motif in art, both in works of famous painters and in contemporary design.

Parrots represent communication, friendliness, sociability and playfulness. These birds are not aggressive by nature and they do not like to be alone. If you have a parrot, you know what we talk about.

Parrots also symbolize familiarity, joy, happiness and positive energy. Their colors would always fascinate us and make us feel good.

Parrot totem is definitely an amazing one! If this extravagant spirit animal guides you, you are surely the one who knows how to enjoy life and make fun of everything, in a good and harmless way. Parrot totem teaches us to look at the bright side of life, to see all the beautiful colors around.

However, you should be careful and not avoid all that seem difficult.

Parrot people are playful, friendly and fun to have around. They are usually self-confident and never envious or too proud of themselves.

To be in the center of attention is something that is natural for parrot people; they do not seek attention, but they are charismatic enough always to get it. However, they are more of entertainers rather than leaders.

These individuals are positive, open minded and creative; they always come up with new ideas. There are only few things that could lower their spirits. Parrot people love life and they do not feel guilty about indulging themselves with little pleasures.

This is a good lesson from your totem parrot; it teaches you to relax and have fun. You should have it in moderation, of course.

In addition, parrots are intelligent animals; therefore, your powerful totem animal will grant you more awareness and cleverness. Parrot people are quite adaptable and resourceful. They are determined when they want something and they do not give up their cause easily.

However, they are smart enough not to become too obsessed with it and neglect other things in life.

They really know how to relax, have fun and surrender to pleasures, but they rarely lose the sense of responsibility, although it may seem they do not worry about anything in life. Parrot people are very communicative and they love to share their stories and experiences with others. They make friends easily and adapt very will to new social environment.

Not only Parrot totem gives you positive attitude and optimism in life, but it also helps you deal with things that seem difficult in much an easier way than people usually do. Parrot people always look at the bright side of life and make sure they spread their positive vibes around.

They are emotional and they are touched seeing other people suffering. A Parrot person is always there to cheer you up; that makes these individuals great friends.

When it comes to seriousness, Parrot people know what to do. They are not aggressive, but could be quite persuasive. You know, we often say a person constantly repeats things as he or she was ‘a parrot’.

However, that sort of stubbornness helps Parrot people endure hard times and accomplish their goals, although it could be boring and pressing behavior.

Overall, Parrot totem is a good spiritual guide. You should learn always to have a positive mind, even when all hope seems lost. You should use you intelligence and creativity to improve your life and your parrot totem will definitely put you on the right track.

Have fun in life, indulge yourself and share love with those around you. Life is so beautiful, you Parrot person!