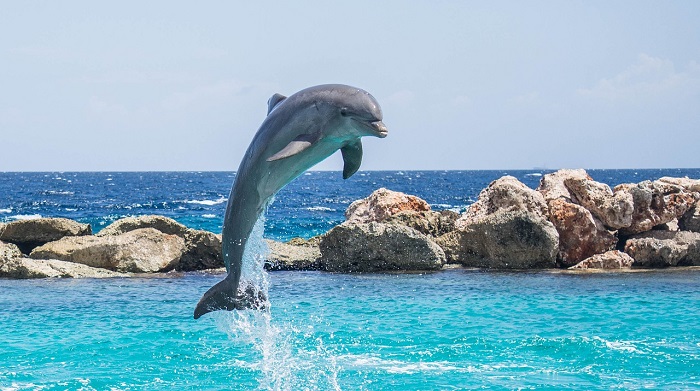 Dolphins are a widely spread group of aquatic mammals. The origin of the name dolphin comes from a Greek word “delphus” which means “womb”, or “fish with a womb”. The term mere swine (sea pig) was also used. The dolphins descend from mammals which were land animals at first. Their closest living relative today is the hippo.

There are 40 species of dolphins still existing in the world.

These animals have a variety of size ranges, ranging from 1.7m in length and 50 kg in weight, to 9.5 m in length and 10t in weight. They are fast swimmers and can travel with a speed of up to 55km/h.

Most dolphin species prefer warmer water, but some species prefer colder ones. Dolphins have blubber under their skin which keeps them warm. The blubber also helps them float on the water surface. It also protects them from predators, which have a hard time penetrating through their thick skin.

Their main diet is squid and fish, but the killer whales for example also feed on large mammals.

The mating cycles of dolphins re different for males and the females. The males mate with multiple females every year, while females mate once in two to three years. Females have the responsibility of raising their calves which they tend to nurse for a long time.

Dolphins are sometimes mixed up with porpoises, but they represent a different species and have different behavior and physical characteristics. They do have a common ancestor with the dolphins.

Different species of dolphins are known to breed among themselves in the wild, producing hybrid offspring.

Dolphins have aerodynamically shaped bodies with two flippers. Their body shape resembles a torpedo. They don’t have flexible necks and their eyes are placed on the sides of the head. Some species have females larger than males.

Dolphins have a well-developed hearing and can both hear well when they are in and out of water. Some dolphin species are good divers as well, and can dive very deep. They are able to slow down their heart rate to preserve oxygen. 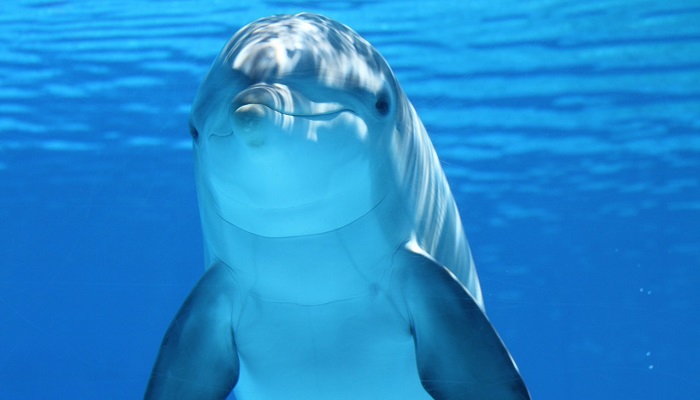 Some species can also redirect blood to their heart and brain, as well as other organs. They also have some other adaptations which enable them to reach great depts.

Dolphins are one of the animals which use echolocation, or bio sonar. Namely, they have an organ, called the melon, which consists of fat.

The dolphins send high frequency sounds from this organ to the surrounding environment and listen to the echoes of these sounds returning from the nearing objects.

These echoes are used to locate, and identify objects. With these echoes, dolphins can also identify their shape and size as well. Their echolocation clicks are one of the loudest sounds produced by a marine animal.

Dolphins’ eyes are small but they have a good vision. On the other hand, they don’t have a sense of smell and some are lacking a sense of taste as well.

One of the characteristics that are usually related to dolphins is their intelligence. They are very sociable animals, usually living in pods of up to ten individuals. The size of the pods naturally varies, depending on the location and the species.

Sometimes, when the conditions are good, and there is an abundance of food, dolphins can form “super pods”, which can consist of more than 1000 dolphins. These are only temporary pods.

These animals can establish strong social ties. They exhibit nurturing characteristics, trying to help injured or unwell individuals. They do that with other species of animals as well.

Dolphins are observed protecting swimmers from shark attacks, forming circles around them to prevent the shark from attacking them, or even charging at the sharks to scare them away.

Dolphins often aggressively attack each other. The evidence of these brutal fights is visible on the bodies of older individuals, usually males. They usually fight over females and the right to mate. The bottlenose dolphin males are also known to kill calves.

The pregnancy period varies depending on the species, around 11 months, but up to 17 months. Females usually give birth to one calf.

Dolphins have a tendency copulate with dolphins from other species. Their sexual acts are often violent and the males demonstrate aggression towards the females as well as other males around. Dolphins sometimes exhibit homosexual behavior and in some cases behave sexually towards other animals and humans as well.

Dolphins have various methods of feeding as well. One of them is herding, in which a pod squeezes a lot of fish into a bait ball, and they take turns going through that ball of fish and feeding on them.

Sometimes they use a method called corralling, where they chase the fish into shallow water where they can easily catch them. Some species strand their prey on the beach and then feed on it.

Dolphins are known for their various vocalizations. They usually produce clicks and various whistles. They also use nonverbal communication, by touching and taking postures. Some species even have their signature whistles, which are unique to a specific individual.

They use them to identify themselves in communication with other individuals. They try to maintain their signature song for their entire life. Dolphins also communicate with each other by mimicking their signature whistles.

Dolphins are also known to leap above the water surface. They do it for saving energy, social display, orientation, entertainment, communication, fighting, etc. They are playful animals, and display various playful behaviors. They sometimes display harassing behavior, such as dragging animals under water without the purpose of eating them.

They also have playful interactions with other animals and humans.

Some of the main displays of their intelligence are their abilities is their ability to learn, teach, cooperate, grieve and scheme. It is also believed that they possess self-awareness.

During sleep, usually only half of their brain is in a slow-wave state, while enough consciousness is maintained to keep them breathe and be alert for potential predators and threats.

In captivity, dolphins enter a fully asleep state and their respiration is automatic. Some species must swim continuously to avoid potential danger. They sleep in very short periods from 4 to 60 seconds.

These animals are very resistant, and are known to recover from severe injuries, like shark bites. They have a rapid healing process and it is noted that even very deep wounds don’t cause them to bleed to death.

Their open wounds restore and the body gets back in shape. They rarely suffer from wound infections.

What does a Dolphin Symbolize?

Dolphins are an important symbol in the history of human society.

They are common in Greek mythology and are usually depicted as helpers of humans. They are often depicted in ancient as well as modern art.

The Dolphin Meaning as a Spirit Animal

The dolphin totem can have many different meanings. Here are some of them:

Altruism. Dolphins are true altruists. They selflessly help individuals from their own species but other animals and humans as well. The dolphin spirit animal teaches you to offer your help to everyone in need, not just the ones who are close to you, but strangers and animals as well.

Resistance. Dolphins are very resistant animals. They are known to heal very quickly even from severe wounds. The dolphin is giving you the gift of endurance and resistance as well. You are most likely a person capable of enduring many hardships and tend to recuperate quickly. You don’t let any kind of obstacle prevent you from achieving your goals.

Coexistence. Dolphins are known to get along well with other animals species and humans as well. They also don’t hesitate to help if some of them are in some kind of danger. The dolphin spirit animal teaches you of the importance of coexistence and helping others in need.

Playfulness. Dolphins are known for their playfulness. The dolphin teaches you to be playful and always look at the brighter side of things. With the dolphin as your totem, you are a playful person and you don’t let other people’s negativity pull you down. You most likely look at life as a game and you seem to achieve your goals and accomplish your desires with seemingly no effort.

Individuality. Dolphins have signature vocalizations (whistles) which are unique to each individual. The dolphin teaches you to respect your individuality and be proud of yourself and your personal traits. With the dolphin as your totem animal you are most likely a strong individual in every sense of the word.

You don’t let other people’s bad opinions about you or your behavior, influence you or shake your security. If someone doesn’t accept you exactly how you are, you simply move away from that person.

The Dolphin as Your Totem Animal

If the dolphin is your totem animal, you are a unique person indeed. Your nature is both serious and playful. You know your duties, but you tend to do them in a rather interesting and fun way.

You enjoy helping others and you have a generous nature. You are also protective and enjoy nurturing and taking care of others, especially your loved ones.

You are sociable and like to be surrounded by people. They adore you because you have an inspiring personality and contagious optimism. You always believe that things will work out in the best possible way.

With this animal as your totem guide, you have strong health, and you tend to recuperate quickly after an illness or an injury.

You don’t let such situations prevent you from your actions. You keep moving forward and you speed up the process of recovery regardless of the cause. 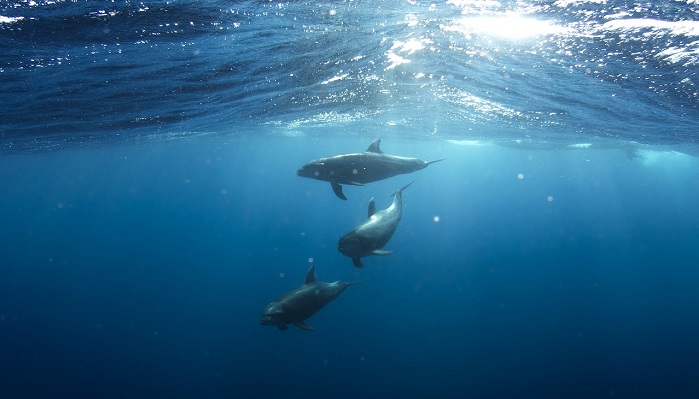 What if the Dolphin Appears in Your Life?

The dolphin appears in your life to remind you to be more self- confident and respect your individuality. You need to be proud of your uniqueness and if someone has a problem with that, maybe you should consider distancing yourself from that person.

If someone has the need to for you to change to remain in their vicinity, maybe that person isn’t the right one to be around with.

The dolphin also appears in our lives as a reminder to take a break from the many responsibilities we have and simply enjoy life. The dolphin reminds you to be more playful and begin experiencing life not as serious, but rather as one big game you need to enjoy as much as you can.

Take time off and do something for yourself. Engage in some fun activities. Try doing something you haven’t done in a while and you know that you will enjoy.

This animal often appears in your life, when you need to balance some areas of your life.

Maybe it is a calling to look around and see if there is someone in need for your help. Give them your hand, whether they are a close friend, a relative, a complete stranger or a strayed cat on the road.

By doing so, you will fill their hearts and souls with gratitude, happiness, and joy, as well as yours.

When to call on Dolphin?

You should call on dolphin as your spirit animal when:

Dreams about Dolphin – Interpretation and Meaning

The dolphin appearing in your dream can be a reminder to have a more playful and relaxing approach towards life. Maybe you are overly serious and don’t dedicate much time to simple pleasures in life.

The dolphin is asking you to relax and let things unfold naturally. You don’t have to control everything.

This animal often appears to remind you that someone needs your help and care.

It is often an encouragement about the future and things working out in the best possible way.