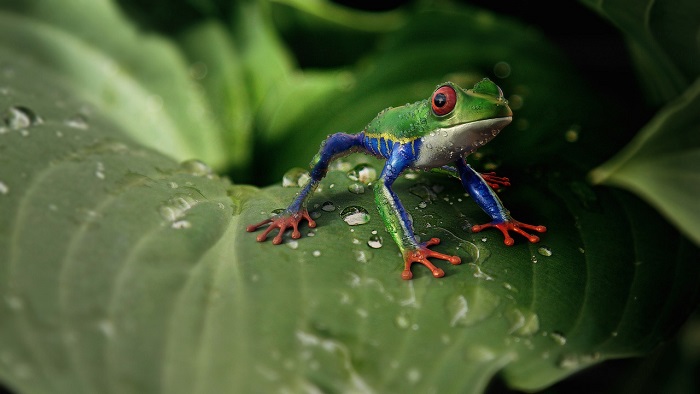 Frogs are probably one of the world’s most interesting creatures, although commonly taken for granted, especially in modern, urban environment. There are various frog species, of which some are considered ugly and repulsive and others charming, colorful and even cute.

However, the truth is that frogs’ appearances could trick us; some of the most colorful representatives of this wide family are, at the same time, some of the most venomous species on this earth.

Frogs are, nonetheless, one of the oldest and most widely present symbolic creatures. They love all around the world and are well known throughout the history of civilization.

In some cultures, frogs are eaten as a nutritive source, in others are used in medicinal purposes, while there are traditions that praise frogs as lucky spirit animals and so on.

In some parts of the world, frogs are only seen as pests, while there are also those that associate frogs with dark forces, black magic, witches and so on.

Spiritual meaning of frogs is vast and full of various different meanings, depending on particular society and tradition.

These animals are featured in numerous folk beliefs, superstitions, mythical stories, legends, popular culture and art. In symbolical sense, frogs have great powers. They are believed to be magical and to have special connections with worlds that are beyond our comprehension.

Frogs are closely associated with many essential concepts for humankind.

These amphibians symbolize all things related to life and death. They are ultimate symbol of existence and flow of life energy. A lifetime of a frog symbolically represents the cycle of life; it is a genesis on a small plan.

Frogs are always associated with transformation, adaptation and change, all concepts important in any human’s life. Frogs are also identified with energy of water, with fertility, rebirth and abundance.

If you ask what does a frog symbolize, you will definitely get many answers. If you ask a medieval European man, he would most likely say frogs are witches’ creatures; if you have asked a Chinese, they would tell you frogs bring money and fortune.

There are dozens of other depictions and beliefs. In following passages, we will try to briefly present these cultural depictions and then go on and discover what symbolic and spiritual powers of frogs are. 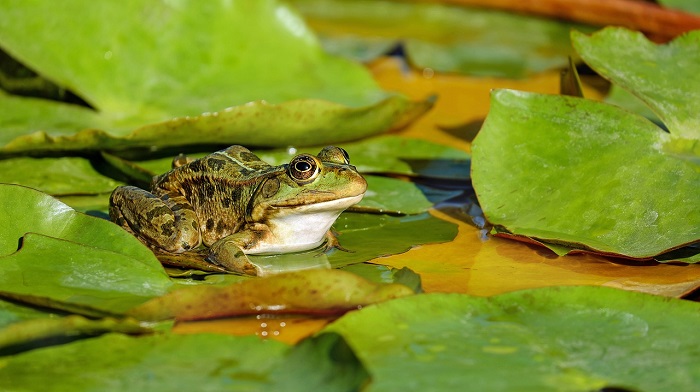 In traditions and mythology of various historical societies, frogs are widely present. In Ancient Egyptian tradition, frogs were associated with abundance and fertility.

Further on, we will discover frogs are one of the most powerful symbols of these ideas in many other systems, as well. Egyptian goddess Heqet, the deity of fertility and childbirth, was depicted as a woman with head of a frog.

The connection is clear and Heqet was one of highly appreciated deities in Egypt.

In Ancient Rome, frogs were also considered fortunate and sacred animals and they were associated with the breathtakingly adorable Venus, the goddess of love, passion and fertility.

In Ancient Roman art, a frog motif would have been used to represent Venus sometimes.

The water element is especially important when it comes to connection between frogs and the idea of fertility, life and earth. To Ancient Celts, frogs were sacred and magical, animals closely related to the earth element.

Celts even believed frogs rule the Earth and that they posses certain healing powers. Since frogs are bound with both earth and water, those main principles of whole life, no wonder these animals were appreciated as embodiments of the concepts of life in its most natural form.

For Native Americans frogs are rain bringers and also spirits that promote fertility and abundance.

While toads have always been wrongly accused of being creatures of darkness, by most Westerners, frogs in general are not a negative symbol in Christianity.

The amazing phases of a frog’s life reminded Christians of transformation and resurrection, so frogs are even associated with the idea of the Holy Trinity. In Asian cultures, frogs have a special place. Let us find put more about Chinese frog and its spiritual power.

In Asian societies, almost all animals have different cultural and symbolical significance, compared to Western world.

Chinese, in particular, have their own specific concepts of understanding this planets life; they have been nurturing special connections with wildlife, as well as with the world of spirits, since ancient times. In Chinese tradition, frogs are lucky animals.

They are believed to have the power of healing, to bring fortune to peoples’ homes, to attract money, promote fertility, happiness and family joy.

Frogs are particularly interesting Feng Shui motifs. Generally, frog symbolism is more positive than negative overall, but, for Chinese, frogs have special meanings. Feng Shui money frog figurines are ‘a must have’, to say so, if you want to be lucky and rich.

There are special Feng Shui guidelines on where and how to position frog figurines in your home, in order to attract luck and fortune. A single lucky frog would do, but it is warmly advised to get nine figurines.

These are to be placed at several spots inside your home, places where they are not to be directly seen; floor beneath armchairs, tables and sofas would be the best.

The idea is to place frogs in a manner that resemble their natural movement, as if they have just entered your home and stayed like that.

An additional Feng Shui advice: do not place lucky frogs so they face the entrance of the house, because that way you make money-bringing energy leaving your home instead of coming in. Frogs are considered luck creatures by Japanese, as well.

In Japan, they have an interesting interpretation of frogs’ symbolism and frogs in Japan are associated with travel and return. The term kaeru stands for both a frog and return, only the kanji letter looks differently.

Therefore, Japanese people carry frog talismans when they travel. They believe frogs have special powers always to bring you home, where you belong originally.

Japanese associate frogs with money, so they also wear frog talismans in their pockets or money purses.

Frog symbolism is explained through these cultural depictions, for a great part. Now we will summarize these beliefs and see them through symbolical prism, solely.

Further on, we will interpret toad symbolism, because it differs from general depictions of frogs and their spiritual powers.

As we have seen, frogs represent many things, amongst which the most powerful ideas are those of life, transformation and fertility.

Frogs symbolize life cycles and changes. For us, humans, a frog’s transformation that goes through three different stages of existence, represents something truly fascinating, even a bit magical.

Frogs, thus, stand for the idea of life cycles and different stages of life we all have to go through. Frogs embody the idea that changes are inevitable, that transformation is essential for progress and that we all have to learn how to adapt to our environment, on major, as well as on a minor plan.

These amazing amphibians also symbolize fertility, birth and healing powers. They represent all joys of life, vitality, happiness and prosperity. All around the world, within ultimately different societies, frog motifs are associated with childbirth, long life and fortune.

It is believed that these animals have power to attract rain needed for our crops to grow and well as to help people have children and long, prosperous life within large, happy families.

We have never been so much in favor with toads, however. Somehow, toads have earned themselves bad reputation, so they are often present as a motif and a metaphor of ugliness and sadness and punishment.

You are surely familiar with at least one fairytale in which a beautiful prince is turned into an ugly toad, for evil reasons of an evil witch.

Toads, in general, are not considered bad or evil themselves, but they are often to be found in stories and superstitions about magic and magical practices.

Symbolism of this unattractive frog varies from a culture to a culture. For Westerners, toads are magical creatures, usually in connection with certain obscure magical business, such as alchemy, sorcery and witchcraft.

However, these fat and ugly frogs are powerful spirit animals in close relation with the Earth element. They are found in dark, wet and hidden places and associated with secrets, deep knowledge and realms of the Other side.

Not all depictions of toads are that dark. Toad meaning could be positive, as well. For example, the Chinese lucky frog we have mentioned earlier is, in fact, a toad, not a cute, green little frog.

In Chinese mythology, there is also a story about a toad with three legs (the lucky one, yes) that has swallowed the moon. In Aztec beliefs, the toad deity has been believed to have swallowed the sun.

It is not always so dark and gloomy for toads, right?

Frog totem is a happy and inspiring one. Toad totem, as well. These totem animals are guides easy to follow and to cooperate with them. They will teach you many good things and help you develop all of your inborn skills and qualities.

Frog people are finny, life loving, vital and energetic individuals, those who do not worry much. They are, however, responsible and caring.

Frog people are very sociable and they do not like being alone. They are intuitive, easy going and adaptable, but they are also tricky when it comes to commitment (e.g. a romantic relationship).

Frog people are not egomaniacs and they always have their ears open for other peoples’ advices.

They listen to what others have to say, they reconsider everything they know and then act. They are, however, not easily deceived or controlled by others.

At the end of the day, they always make a decision that comes from their intention solely. Frog people are independent and resourceful, but they enjoy company of others.

In fact, frog people hate being alone, while, paradoxically, they find it hard actually to commit to a single person. They could change their mind easily, which makes them a bit unreliable.

However, they are loyal and supportive friends and they would never hurt, betray or abandon someone close to them. Frog people are known to need a bit more of a concrete goal or focus in life. Apart from that kind of instability, they are perfectly fine.

Frog personalities have an incredible sense of humor. They would always make you smile and they are good to have around. They have all kind of interesting stories to tell and they are not stingy, they love sharing. Frog individuals are considered very lucky people. However, that optimism and joy for life they feel they probably have to thank to their inborn modesty.

They do not ask much, but they value their lives. These people attract and emit positive energy, which makes them great friends, super cool parents and inspiring lovers.

When it comes to commitment, they are a bit unsteady. They have great imagination and they are creative, so they are always on the move.

They find it hard to settle down, but it is not impossible, of course. They just need a really strong motif, such as meeting a person of their dreams, for example.

. If they decide to stay single, they always have many friends around, make themselves busy, and are moved by various other sources of inspiration.