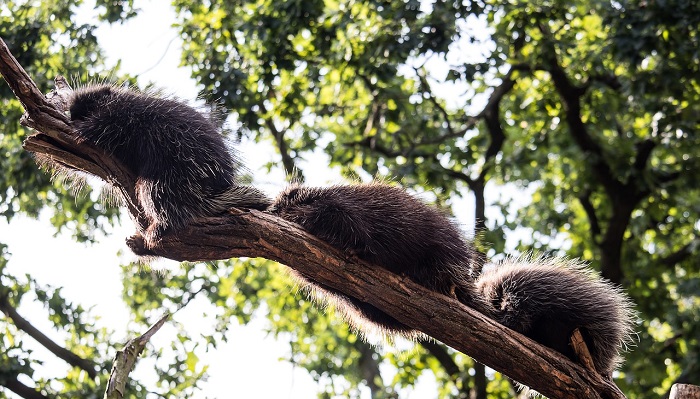 Porcupines are large rodents. They are covered with quills (spines) they use as their defense against predators.

The porcupines of the Old World live in Europe, Asia and Africa. These animals are nocturnal.

They are large and terrestrial animals.

The porcupines of the New World live in North and South America. These animals are smaller than the Old World porcupines. They live in woods and are able to climb trees.

These animals are excellent climbers and some species even live in trees. They are not as nocturnal as the Old World porcupines and often have daily activities.

In America the porcupines are also called quill pigs.

These animals have a long life-span of around 27 years.

Porcupines live in forests and deserts, and sometimes on rocky terrains and hills. Some of them live in trees.

Porcupines are herbivores. They eat leaves, herbs, green plants, fruits, berries, farm crops. In some countries, these animals are considered pests because they destroy the farmer’s crops.

The porcupine displays defensive behavior when it is agitated or somehow annoyed.

Porcupines display their defensiveness in various manners, such as erecting their quills, clattering their teeth, emitting a foul odor, as well as attacking. The last one is the most aggressive display of the porcupine’s defensiveness. 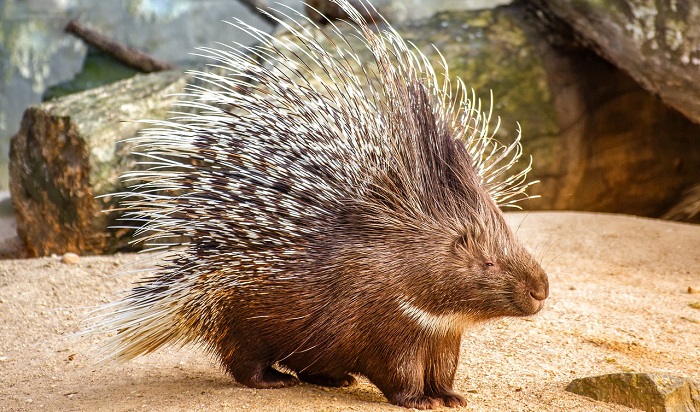 The quills are modified hairs coated with keratin and embedded in the porcupine’s skin. The lost ones are replaced by new ones.

What does a Porcupine Symbolize?

The Porcupine Meaning as a Spirit Animal

The porcupine totem can have many different meanings. Here are some of them:

Defensiveness. One of the main characteristics of the porcupine is their defensive mechanism, which ranges from less aggressive measures to the most aggressive one, which is direct attack on the opponent. The porcupine totem is teaching you to defend yourself using all available means.

Sometimes you can be a person who is overly defensive and tends to overreact, ending up hurting people undeservedly.

In that case, the porcupine totem is teaching you to control your reactions and think well considering all the facts before attacking someone in any way.

Renewal. The porcupine grows new quills when loses the old ones. This totem teaches you the gift of renewal of strength when it is necessary. You know when to retreat to renew your strength, so you can move on towards your goals completely revitalized.

Courage. The porcupine will fiercely charge against the opponent using its powerful quills as its killing weapon. And by doing so, it manages to injure and even kill its enemy. The porcupine spirit animal gives you the gift of bravery and ability to stand up against anyone who tries to jeopardize you in any way.

If the porcupine is your totem, you could be overly defensive. Maybe you don’t tolerate anyone criticizing you and saying anything you dislike or disapprove. You could also be a person who enjoys criticizing other people.

When you are agitated by someone, you tend to lack self-control and tend to be brutal in your reactions.

You will say the first thing which comes to your mind without thinking about the consequences.

That way you can end up hurting many people, without considering first if they deserve such a treatment from you or not.

You are also capable to defend yourself against other people’s malicious attacks.

What if a Porcupine Appears in Your Life?

If a porcupine appears in your life, it might be a sign that you need to let go of some past resentment which is blocking your progress in life.

This totem animal could also be asking you to let down your guard a bit.

Maybe you are behaving overly defensive without a reasonable explanation and the porcupine in your life is asking you to change your behavior.

The porcupine is also asking you to think about reactions before you react, and also not to overreact and cause more damage than necessary.

The porcupine reminds you to be careful when using your defensive mechanisms, which are usually your words.

You tend to be very harsh with your words, ending up hurting people for no reason. It is good that you know how to defend yourself but you don’t have to be overly protective.

In some cases, the porcupine appears when it is time to protect yourself against something or someone. You need to trust your abilities to defend yourself from any harm.

The porcupine might also appear in your life as a reminder to listen to yourself and your intuitive guidance and don’t allow other people interfere with your desires and goals.

You know what is good for you.

When to call on Porcupine?

You should call on a porcupine as your spirit animal when:

Dreams about a Porcupine – Interpretation and Meaning

A dream about a porcupine indicates the need to protect you emotionally from someone potentially hurting you.

This dream could also indicate needing to open up in some situation.

You or someone else in your life is behaving defensive and that complicates things and prevents finding solutions to some issues you have.

In some cases, this dream is asking you to become less defensive because you might begin to repulse people with your attitude.