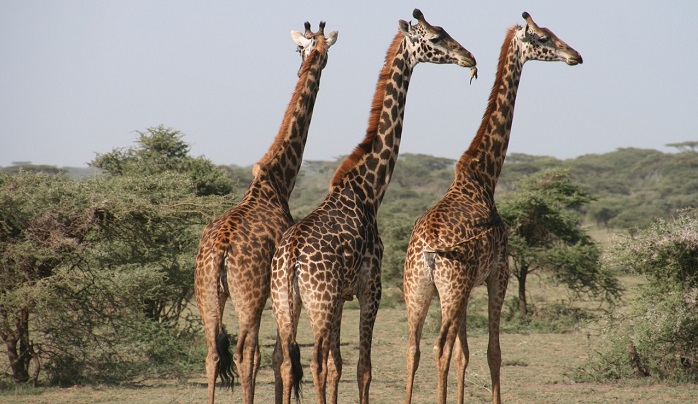 The giraffe is an African mammal, as well as the tallest living terrestrial animal. There is only one existing species and seven extinct species we know about from their fossil remains.

These animals are mainly known for their long necks and their unusual height. They also have unique coat patterns. Giraffes are found throughout Africa, usually inhabiting woodlands and savannahs.

Giraffes are herbivores and they mainly eat fruits, shrubs, leaves and the flowers of some woody plants, usually acacia trees.

These animals are social beings, living in groups called herds, consisting mainly of related females with their young, or unrelated adult males. They can also gather in large groups.

Male giraffes have a strict social hierarchy which is being established by combats between males. When fighting, they use their necks as weapons to charge at their opponents. This is called “the necking”. Winners get the right to mate with the females. The females raise the young on their own.

Male giraffes are taller than females. Fully grown, they reach the height of 5.7 meters. Males weigh more than a tone, while females are over 800 kg.

Giraffes have a good all-round vision, and sharp sense of smell and hearing.

Their coat is white or cream, and is covered with patches of brown, orange, chestnut, or near black color. It is considered that the patterned coat is used for camouflage purposes, and mainly for the young, which spend most of their time hiding somewhere. Every giraffe has its own unique coat pattern.

These animals have very thick skin which enables them to run through thorns without being injured.

Their front and back legs are similar in length. They use them to walk and gallop. While walking, they move the legs on one side of the body simultaneously, and then do the same with the legs on the other side of their body. They are fast runners, speeding up to 60km/h.

Being so tall, they need to kneel on the front legs and then lower the rest of the body to lie down. They usually sleep lying down, but they can also sleep standing on their feet, usually the older giraffes.

Their necks are extremely long, reaching up to 2.4 meters in length. There are several theories about the development of their necks. One considers that giraffes developed their long necks through the process of evolution to be able to survive and reach the food other animals couldn’t do to their smaller height. 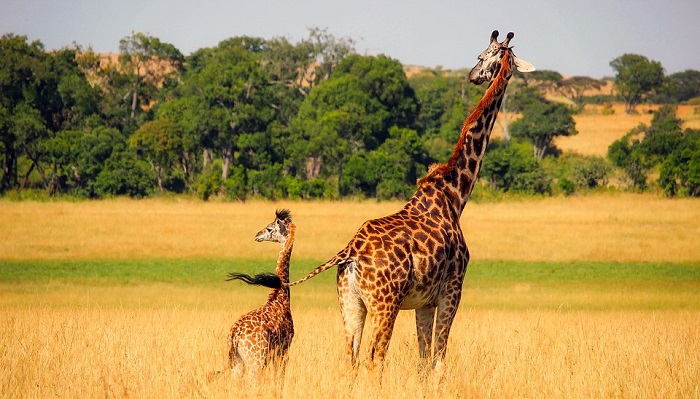 Other theory considers developing a longer neck as sexual characteristic, which enables males to get better results in the necking contests they participate in. One theory considers the neck as a means to provide giraffes’ better vigilance.

Giraffes prefer woodlands and savannahs, but some can be found in desert environments, such as the Angolan giraffe.

Giraffes eat approximately 34kg of plants daily. They don’t need as much food as other animals because their diet is richer in nutrients and they have a very effective digestive system as well. They feed mostly early in the morning and by the end of daytime.

Giraffes can form long-term social relations and sometimes bond in pairs based on sex or kinship or for some other reasons. Some groups can go up to 44 giraffes.

These animals usually aren’t territorial, but they have territories they usually hang around.

They are non-vocal animals, but they do emit some sounds, such as coughs, snorts, mooing, bellowing, hissing, moaning, mewing, etc.

The pregnancy period lasts around 15 months. Giraffes usually give birth to one calf and in rare occasions two calves. A newborn is up to 2 meters tall. The young can run after only few hours after their birth.

Sometimes females leave their calves with one female giraffe to take care of their young, while they go searching for food or water. Males don’t have a part in raising their offspring.

In the wild, these animals usually live up to 25 years. They don’t have many natural predators due to their enormous size, but their powerful kicks as well. They are a common prey of lions and sometimes crocodiles. These creatures wait for their chance while these animals drink water.

What does a Giraffe Symbolize?

The giraffe symbolizes many things.

The Giraffe Meaning as a Spirit Animal

The giraffe totem can have many different meanings. Here are some of them:

Gracefulness and elegance. Giraffes are known for their graceful and elegant posture. These totem animals teach you of the importance to maintain your gracefulness and be elegant in all situations. With a giraffe as your totem you are most likely a very elegant person.

Kindness and gentleness. The giraffe totem animal is reminding you to be kind and gentle to others regardless of how other people might behave towards you.

Protectiveness. Giraffes can be very protective, especially mothers defending their calves. They are able to defend themselves by strongly kicking their opponents with their legs. The giraffe totem teaches you to protect yourself and the ones you care about using all your resources, abilities and strength.

Foresight and psychic abilities. Giraffes are animals able to see more than other living beings. As a totem animal, they give us the gift of foresight and ability to foresee the future and other psychic abilities. With this animal as your totem, you are most likely already aware of these abilities and you use them to help yourself and others.

Sociability. Giraffes are sociable animals which often live in herds. This spirit animal teaches you how important your social group is and the importance of nurturing the relationships with its members. If a giraffe is your totem, you probably have a big social circle you enjoy spending your time with.

Giraffe as Your Totem Animal

If a giraffe is your totem animal you are most likely a person who is very confident about your abilities and sees the bigger pictures of things, but at the same time standing firmly on the ground.

You are probably a person with a lot of grace and you could have a longer neck than usual. You could tend to put other people’s needs before your own, which is a trait you need to work on.

You are kind and gentle, and you should prevent people from trying to use these traits of yours to their advantage.

With this animal as your totem, you could be gifted with psychic abilities and abilities to see the future.

You are also very attached to your family members and friends and nurture your relationships with them.

What if a Giraffe Appears in Your Life?

The giraffe might encourage you to seek intuitive guidance and begin listening to your heart when it comes to making decisions and choices about important issues in your life.

It also reminds you to rely on your intuition when you need guidance in life.

Listen to your gut feeling and do what feels right and makes you happy.

When to call on Giraffe?

You should call on giraffe as your spirit animal when:

Dreams about a Giraffe – Interpretation and Meaning

The giraffe in your dream could indicate the need to see some situation from the overall picture not just its parts, so you could make an objective decision or a choice.

If you saw a giraffe running in your dream, that could indicate trying to avoid admitting the truth in some situation.

A dream in which you were riding a giraffe could reveal your desire to be unique and noted for your individualism. You are most likely seeking attention, but probably not receiving any.