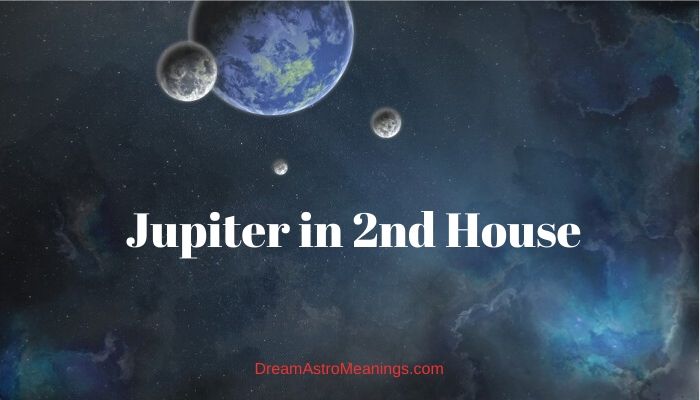 One of the greatest deities of the ancient world, Jupiter was much adored as a god associated with justice, prosperity, fortune, weather and more. The planet Jupiter seems equally admired in astrology.

Jupiter is one of the social planets, alongside its opposite neighbor, Saturn. The planet of expansion and fortune, progress, wealth and much more, Jupiter would play an important role in one’s natal chart.

Although social planets are usually associated with generational effects, if they create strong aspects with other planets, personal ones in the first place, their effect is likely to be manifested more directly.

Astrological houses are fields that represent different segments of life and one’s personality.

Planets inside these fields and aspects they form would affect each area of life in a specific way. Today we will talk about Jupiter in the Second House.

To begin with, let us learn something more about this particular field and the planet Jupiter.

The Second House in Astrology

The Second House is a house of materiality, in the first place. This is the house associated with property, wealth, finances, all the gains and losses, money; this field is associated with everything you earn and spend and so on.

Therefore, it is of essential importance to understand the planets and aspects found inside your Second House.

This astrological house is associated with one’s ability to gain something, above everything else. Therefore, indicators of wealth and prosperity found in this field or otherwise in the chart do not exactly mean much, if you were incompetent.

This competence for building up your material base is the most important element to consider regarding the Second House. This field tells about the way you could possibly do it and about your potentials.

For example, there are people born under the lucky star, naturally fortunate, with a good starting point or those who have grabbed a perfect opportunity.

The Field of Maintenance

However, maintaining your stability, especially when it comes to finances, property and material possession in general, is something else.

This field tells about your capacities to maintain what you have accomplished and also to develop and grow it further. However, the Second House is not exclusively about material standards and dealing with matters of finances.

This is also the house of systems of value, principles, talents, personal abilities, one’s need for stability and safety, one’s attitude towards different sets of values. This is the house about your own principles and your own set of values.

This is even more important than this material aspect of the field, because values you praise and principles you were guided by shape up your personality and your identity.

Since this is the house associated with the concept of maintenance, it is also about building your system of value, about reinforcing and maintaining it. This is very important, because a person who knows their values is a self-confident person.

It does not mean you should never change them, but the first step is to become aware of what you hold important and worth of respect and admiration.

This is the house of stability, as it is analog with the sign of mighty, strong and much grounded Taurus.

In the following paragraphs, we shall see how benefic Jupiter, the planet of wealth and fortune sits within the walls of the Second House.

Zeus or Jupiter was the supreme god in the ancient pantheons of Greece and Rome. He was much adored and worshiped throughout these ancient realms.

Jupiter was known as the father of gods, the master of thunder and lightning, the rainmaker, the protector of both heavenly and human laws and order. Jupiter was considered the keeper of justice, the patron of great knowledge and wisdom.

He was an old sky deity, associated with weather and justice. In Ancient Rome, Jupiter was, so to say, even more than a god. His cult was associated not only with spiritual worship, but also with matters of the state. Jupiter was a constitutive element of the Roman state, one could daresay.

This god had a great political importance, besides being adored and admired as a god who governs thunders, lightning and rain.

Rulers were under his protection and guidance. In fact, it was Jupiter who would give one the right of rule and the power to rule. Jupiter would ensure that law and order take place.

He was also associated with victory, success, prosperity, fortune and righteousness. He was the one to establish the lawful balance between the state, the individual and the people of Rome. Back in Greece, Zeus was also widely worshiped.

Many shrines were built in his name and Zeus’ statue at Olympia was one of the seven wonders of the ancient world.

According to Greek mythology, Zeus overthrew his father, Cronus the titan (Saturn in Roman mythology) and established his rule over the realms of gods and men. He divided the reign with his brothers Poseidon (Neptune) and Hades (Pluto).

Zeus ruled the sky and the earth, Poseidon was the god of the seas and Hades ruled the underworld.

Jupiter in Astrology – Planets in Houses

Planet Jupiter is a benevolent astrological giant, loved as equally as the wise and just father of gods. Jupiter is the largest planet in the Solar system and it is a great benefic in astrological sense.

In Jupiter, matters of the soul are stronger than material, although this planet is, indeed, associated with material wealth and fortune, besides other concepts. Jupiter is an extremely positive planet.

Jupiter is sometimes considered a fortunate, lucky star. If you have this planet emphasized in your natal chart, and in good aspects, you would be considered lucky. This is the planet of prosperity, progress and expansion. Jupiter stands besides Saturn, the planet representing everything opposite.

While Saturn was limiting, restrictive, the planet of gloom, despair, disaster and trouble, Jupiter is essentially different.

Jupiter is the planet of great optimism and positivity in life, which is primarily associated with the concept of expansion. Jupiter is associated with knowledge, wisdom and, as such, with high education, philosophy, religion, faith and else.

All these were predisposition for another form of expansion, the material one.

Therefore, this is also the planet associated with wealth, high places, prominent positions, career success and so on.

This planet is associated with law, justice, morality and ethics. People who are guided by Jupiter, meaning this planet play a significant role in their birth chart, are extremely charismatic, self-confident and generous, kind and open towards the world.

They know their importance and value, but they do not brag about it. Instead, they are altruistic and supportive people. Of course, aspects have to be favorable for Jupiter to manifest this way.

However, the energy of this planet is strong and so positive that it would take extremely unfavorable combo of aspects to make it dysfunctional.

The risk with unfavorable aspects is that of overexpansion, which could lead to finding it difficult to decide on options in life or overindulging or whatever that crosses the border.

Anyway, Jupiter is a very gentle and benevolent giant of the Zodiac. Jupiter makes people naturally lucky and optimistic.

Individuals under a strong influence of Jupiter tend to look at the bright side of life, but they do not neglect or forget the other one.

They are highly adaptable and wise. They rarely complain or ask for help. However, they are hospitable, compassionate and read to help others.

Most importantly, they believe in goodness of the world and the people inhabiting it. Jupiter people have faith in life, in themselves and the people of the earth.

Jupiter in the Second House – Jupiter in 2nd House

This is an amazing place for a great benefic Jupiter! Jupiter in the Second House indicates a stable and a very pragmatic personality who knows how to use a good opportunity, through wisdom, knowledge and practical thinking, without tension and rush.

People with Jupiter in the Second House are simple, in terms of building their material base; they do not complicate things unnecessarily. They know how to use the available resources, which is the first step for something greater.

The thing is that they value what they have and the understand where they stand at this moment.

They say something like ‘ok, I have this and that, I would like something more, so let us see what I should do.’ They are very optimistic, positive and usually have very clear goals.

Their ultimate goal is material stability. However, these are not people obsessed with high status and uncountable wealth.

However, they do enjoy luxury and a nice lifestyle, but only if they have earned it by their own hands. Moreover, they are very handy, pragmatic, they enjoy working on their own and the whole process of building is their thing.

Remember, Jupiter is the planet of expansion and the Second House is the house of material wealth and system of value.

People with Jupiter in the Second House are true hedonists. They love extravagant, expensive things; what is very nice about them, if aspects were good, they are not greedy, envious or jealous people.

These people want stability in life, but also they want expansion. More importantly, they are very patient, dedicated, ready to work hard, with a smile on their face, because they have a goal.

Their nature is friendly, kind and open to people. These people are nice towards others; they are capable of making strong connections and fruitful collaborations.

Jupiter in 2nd House – The Star of Fortune

People with Jupiter in the Second House have a nose for business. They have a strong intuition when it comes to good opportunities regarding finances and career.

They recognize opportunities and use them, efficiently. They would start from, for example, a successful collaboration and eventually end up leading their own business.

However, there is also the element of luck. Many of Second House Jupiter people are considered born under the star of fortune, because what they do usually results in an incredible amount of money.

It seems that they make money easily. However, it must be noted, they make it; money does not come out of nowhere.

Their secret probably lies in their incredibly positive attitude towards life and their faith in fortune. It seems that they attract lucky circumstances. Well, you know how they say, the glass may be half-empty or half full.

For Jupiter people in general, the glass is always half full. In addition, their attitude towards various situations is genuinely pragmatic.

When you have pragmatism and optimism as your main traits, it is easy. No doubts, suspicions and negative feelings would stop you from doing your thing. In addition, these people are benevolent, good-hearted, tolerant, ones that do not wish any harm to others.

Jupiter Second House people tend to be very relaxed, especially once they establish a stable source of income. They turn to hedonism and it leads to overindulgence. They are very carnal, very physical people, so they enjoy all kinds of tangible, sensual pleasures.

It is not a bad thing per se, but it often happens these lucky hedonists lose their track.

They could start spending too much, indulging themselves with too many things that could eventually cause damage. Let us take a plastic example, joys of delicious food.

These people could become true gourmands, but they are likely to cross the limits of what is healthy for their body.

You know, having a nice luxurious piece of cake once in a while is a top pleasure, but do not have it every day, even if you can afford such things.

This is something people with Jupiter in the Second House have to bring into their conscience. Balance is always the key and so it is for Second House Jupiter natives.