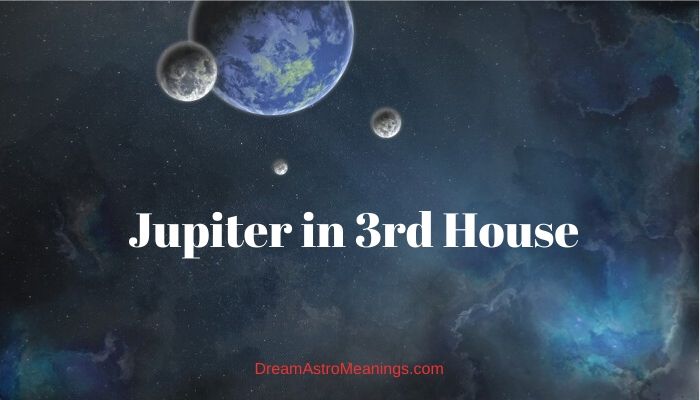 Jupiter and the Third House fit well! Jupiter is the planet associated with the concept of expansion, education, wisdom and earning, prosperity and growth.

The Third House is the field of communication and learning, associated with social relations and those with brothers and sisters.

Jupiter in astrological houses has the effect of expanding; now, depending on the field, a particular area of life will be affected.

It could be incredibly good, although there is always one risk regarding Jupiter and it is over-expansion. The greatest benefic amongst the planets and the lively third field make a good match, though.

Let us learn more about the Third House and the planet Jupiter, before we move onto this specific natal chart combination.

The Third House in Astrology

The Third House is analog with the sign of Gemini. It is one of the cadent houses and an Air house. This is a lively house, just as Gemini is a lovely sign.

This house is specifically associated with communication in the widest sense. When someone mentions communication, people usually think of direct conversation and talking. However, communication could be both verbal and non-verbal.

Mimics, gestures, attitude, style, everything that sends a message to another person or a larger audience is communication. All this has to do with the Third House.

This is something you could answer through the third field, for instance. This house tells much about your relations with people, exactly because it has to do with exchange and learning through communication.

One’s ability successfully to communicate the desired message is also something you could evaluate through the third field. Potential arguments, misunderstanding, conflicts and else could be seen in this field.

For example, if one has unfavorable planetary aspects associated with this field, it would affect that person’s communication skills. For example, say you have Venus in this field and aspects were not nice; you would very likely face problems regarding romantic communication.

On the other hand, if the aspects were great, you will definitely have no problems, on the contrary. This was just an example. This house is also associated with practical thinking and one’s problem-solving skills, which is of major importance throughout the lifetime.

You have to agree this is very important. This is the house associated with analytical and logical thinking.

The Third House has much to do with the environment and the people who surround you. What could you learn from them, what you could share with them? What your social environment represents as the most important and how do you take it?

These are all the questions related to the Third House. It is always interesting and very useful to observe the planets inside this house.

It could be empty, but there could be more than one planet. In this case, the house is not empty; there is mighty Jupiter inside.

Let us learn more about Jupiter, before we see how it corresponds with this field.

Mythical times had many tales to tell. Such one is the story of Zeus, the supreme Greek god and the head of the Olympian pantheon, whom we also know as Jupiter in Roman mythology.

According to myths, Jupiter ascended to power and reign over the realms of both gods and humans after overthrowing his father Saturn. The myth tells that Saturn was devouring his children, in fear of destiny that eventually came upon him.

The titan Saturn or Cronus in Greek mythology, rebelled against his own father and defeated him, castrated him and ruled in his place. He was afraid that the same thing would happen to him, so he ate his children.

However, Rhea, the mother, saved Jupiter and he deposed his own father Saturn. Jupiter shared reign over the world with his brothers Neptune and Pluto, known as Poseidon and Hades in Greek mythology.

Many myths tell about Zeus and Jupiter and many shrines were dedicated to these deities. Jupiter was widely admired in the Ancient Rome, as he was more than a god of rain, thunder and lightning.

The cult of Jupiter had a political significance and it was something to keep balance between the Roman state, the individual living within its borders and the people of Rome as a whole.

It is good to remember that one of the seven wonders of the ancient world was the statue of Zeus in Olympia, which proves how much Greeks admired the father of gods. Many functions were attributed to Jupiter besides mentioned.

He was the god of justice, law and order, wisdom and knowledge. The god of prosperity, wealth and fortune, of victory and success, he was.

Jupiter in Astrology – Planets in Houses

Many of Jupiter’s divine functions could be found in the concept of the astrological planet Jupiter.

The largest planet of the Solar system, known in ancient times, Jupiter is considered the most positive planet within Zodiac. Jupiter is a giant, but a benevolent one. Jupiter is associated with luck, fortune, wealth and expansion. If you have Jupiter emphasized in your natal chart, you are a lucky person.

It indicates traveling to distant lands, meeting and establishing connections with foreign countries and foreign people.

This planet is about wealth and fortune, material abundance and progress overall. People with strongly positioned Jupiter in their charts seem to be born under a lucky star.

Everything appears to come easy to them. Money falling from the sky, happy and stable relations and else. However, there is a secret to it and it does come from Jupiter. Jupiter is a planet of great wisdom, optimism and faith.

People guided by Jupiter are very friendly, generous, self-confident, ready to help and support others, while they rarely ask anybody for help. They do extremely well in unexpected situations, as they are naturally resourceful and positively oriented.

Nothing could bring them down, because they would never lose faith in goodness in this world and the humankind as it is. These people believe in themselves.

They are mostly laidback, though they are not lazy. They are easy to talk to and exchange opinions. They are friendly and open to others, as they very much like to learn about what other people believe, about ethics and morality.

Jupiter could form bad aspects with other planets and, in that case, it happens that its positive expansion turns into over-expansion.

When talking about Jupiter in houses, its position would determine the segment of life in which you are likely to experience the greatest progress and growth. It would tell you what are you capable of and what are your potentials to achieve something within the field.

Let us find out what does it mean to have Jupiter in the Third House.

Jupiter in the Third House – Jupiter in 3rd House

Jupiter in the Third House makes for a fantastic combination. This position gives an eloquent, lively and communicative personality, highly emancipated and intelligent one.

People with Jupiter in the Third House are adventurous spirits, always open to meet new people and exchange opinions on various matters. This person loves being informed about the current affairs, on both a minor and a major plan.

The Third House is about communication, logical mind and basic, common sense and knowledge, while Jupiter is more profound. Jupiter is about expansion and the third field is about education and learning, so the two fit perfectly fine.

People with Jupiter in the Third House are eager to learn more about people and the world, but they go deeper, below the surface.

They nurture their intellect and nourish their mind and spirit. These people see to enrich both their heart and soul with every step they take. With such a position of Jupiter, one would very likely experience insatiable wanderlust.

These people enjoy traveling across the world. Both the Third House and Jupiter have to do with travel; the house is about short trips, but Jupiter is about distant lands and foreign places.

Therefore, these people would like to see, experience and learn from both closest environment, places, and people living fairly near, their fellow citizens, for instance, but they would also travel distant miles and meet different cultures, explore their systems of value, learning something new.

Since they very likely have amazing communication skills, they get along with pretty much everybody.

This is an amazing gift! These people are very tolerant, observant, interested into others. They, themselves, find it easy to adapt to various circumstances and environments. They want to understand.

As we have mentioned the faith and belief in goodness to be the most powerful trait of many Jupiter influenced people, one can only imagine how it contributes to establishing healthy and fruitful relations with people from all over the world.

People with Jupiter in the Third House are very active and of an enthusiastic, lively spirit. They are motivated by a clear goal; they want to see, learn and experience this world as much as it is possible. They feed on adventure and find it really hard to sit still.

The expansive Jupiter always wants more and more; more to see, more to experience, more people to meet, more cultures and lands to explore. Their thirst for adventure is insatiable.

These people do not find pleasure in stability, because their stability is, in fact, their movement. They feel at their best if they move from place to place. They absorb the place they visit to the fullest, they see to meet people and understand their attitudes, beliefs, philosophies.

This is not a typical adrenaline junky quest; it is deeper than that, but what they need is excitement. Without it, they do not feel good.

Jupiter in the Third House, thus, indicates frequent movement and changes of the place of residence. It also indicates a possibility of moving abroad for good, for study or for work, for a longer period or anything of the sort.

It is also likely that these people become successful in careers that fit well with travel; they could find great satisfaction in being digital nomads, for instance.

People with Jupiter in the Third House are versatile. They have many talents and also a natural gift of using their talents to make money. Journalism, writing and anything that has something to do with communications skills could be their thing.

Being resourceful, capable of adapting to new situations very quickly, efficient in solving problems, these people know how to use their talents for practical purposes.

Since they are very intelligent and excellent spokesperson, also good in terms of non-verbal communications, these people easily establish favorable relations with people from their sphere of interest.

They are tolerant, understanding and ready to make compromises (as long as it does not seriously affect their freedom of movement), so they could make some fantastic, efficient and fruitful business deals with other people.

Generally, they are very independent, clever, good-hearted, but definitely not naïve. They are very optimistic, their mind is very logical and practical. If it happens that they fail, they would simply gather the pieces and start anew, very likely something entirely different.

They rarely lose their spirit or feel deeply affected by failures. Their versatility, openness and thirst for novelty always open another door.

In addition, these people are known to maintain quality relations with their family, especially with their siblings.

Their movement does not affect these contacts and such relations are not only excellent in emotional sense, but they also contribute to the overall material situation, one way or another.

When it comes to love life, they are of amorous nature. However, one really has to be interesting enough and intellectually on their level, in order to catch them for good.