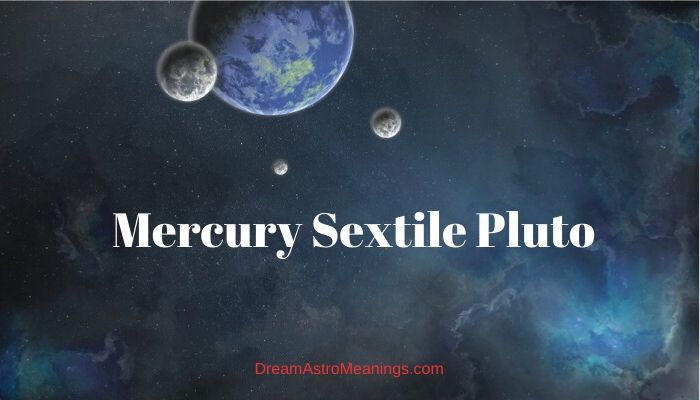 Astrology is very useful in determining the major traits of a person and demonstrates possible pathways where the person’s life could focus upon.

Astrology does that by deciphering the planetary positions in the person’s natal chart, but also determining the meaning of the aspects their natal planets are making.

In the natal chart planets are in fixed in the positions they were in the moment of the person’s birth.

Aspects in the natal chart have a strong impact on the personality and their life experiences and destiny.

In astrology, there are major and minor aspects. The main or major aspects have the most powerful impact, but minor can also be considered important, especially with tight orbs.

Major aspects are the Conjunction, Square, Opposition, Sextile, and Trine. The exact major aspects of planets are the most important for determining the person’s traits and main events in their life.

The Sextile is an aspect which is considered harmonious. Sextile is similar to the Trine, although Trine has a better influence.

The Sextile allows the planets’ energy to flow easily, which is unlike bad aspects which block the energy of the planets that are part of the aspect and create obstacles towards achievements in the areas ruled by these planets, and the houses where these planets are placed.

The Sextile aspect is considered to create cooperative energy between planets, allowing both planets to express their best nature.

This aspect is formed when the planets are 60° apart from one another. The orbs for Sextile are tight, and are up to 5° (+/- 5° = 55° or 65° distance between the planets). Signs which naturally form Sextiles are in complementary elements, like water and earth, and fire and air.

Sextiles are aspects which create the person’s talents, which are often related to the areas ruled by the planets and signs that are a part of this aspect.

Sextile aspect can sometimes have a bad influence on the person, because it eases the way the person gets things, and that causes them to become lazy and lack ambition. They have many opportunities to succeed in many areas but they often miss many chances because they know that a new one is right around the corner.

The lack of effort needed to accomplish their desires often makes these people to become stagnant and not achieve their full potential in life.

When the sextile aspect is activated by transits and progressions, they often bring some new experiences and people into the person’s life.

This might be a period of personal growth and a lot of opportunities. It might indicate some people that might help the person improve their life appearing during this time.

Mercury is the smallest planet of our Solar system. It is also the closest planet to the Sun.

This planet moves fast, and only the Moon has a faster movement than Mercury. It only takes about 88 days for Mercury to make a circle around the Sun.

The name Mercury is the name of the Roman god of communication, trade, financial gains, messages, travelers and travel, tricksters, deceit, good luck and fortunate endings.

It is also the ruler of messages and messengers, our cousins and neighbors, relationships with people from our surroundings, short-term trips, etc.

This planet is the ruler of the sign of Gemini and Virgo and has strongest influence when it’s placed in these signs.

Like Mercury Pluto is also small, but is considered a dwarf planet, which is an astronomical body that lacks all the traits of a true planet. Pluto was discovered in 1930 and is very important in Western astrology.

It has a powerful influence on other planets, especially when forms aspects with personal planets.

Pluto symbolizes death and rebirth, transformation and renewal. During important transits and progressions Pluto can completely transform someone’s life, especially in the lives of people who have a prominent Pluto in their natal chart.

This planet symbolizes the soul and gives the people who are under its influence ability for deep intuitive insights about matters. These people often have a strong intuition that rarely fails them.

Pluto helps in discovering secrets and hidden truths. It doesn’t allow anything to remain hidden.

The placement of Pluto in the natal chart reveals the areas of life where the person will encounter Pluto related issues and these are usually the areas where the person might experience intense power which can create but also destruct.

It symbolizes major changes which can be caused by the person’s initiative and actions, but also happen without any influence and control by the person.

Pluto causes massive changes and transformations in the person’s life and after experiencing some of these changes the person is not the same as before. Good aspects of Pluto don’t bring enormous destruction unlike bad ones which can be devastating for the person’s life.

During Pluto’s transits and progressions the majority of Pluto related events begin happening, and this can be a very challenging period in the person’s life.

Pluto symbolizes matters such as dominance, control and manipulation. People influenced by the planet Pluto might often experience issues with these subjects, and be prone to manipulating, controlling, or dominating others, or others can treat them in a similar manner.

Pluto teaches us lessons, and one of the person’s lessons might be to learn how to stop treating others in such a manner, or how to stop allowing others treat them in such a way.

Pluto often points out the area of life where the person needs to let go of something or someone.

Because it is a generational planet, and people born during a span of around 12 years have Pluto in the same sign, this planet’s influence on individuals is strongest through aspects with personal planets and points in the natal chart, as well as the placement in the natal chart.

Aspects with generational planets don’t have much influence on individuals, unless they are a part of a complex or mixed aspect with some other planet or planets, like the Grand Trine, T-Square, etc.

When Mercury and Pluto are combined through some aspect, this usually strengthens the person’s intellect and gives them great intellectual power and sharpness of mind.

These people often tend to stick to their ideas and are not very flexible and adaptable when it comes to accepting other people’s point of view.

The Sextile eases this tendency because the person has enough sense to realize that refusing to adapt and change their beliefs will lead them nowhere but stagnation and prevent their progress.

These people have a powerful ability to concentrate. This ability enables them to get to the core of things if they focus their mind on some subject. They also have a strong intuition.

In some cases, usually when there is also some negative aspect involved with these planets, the person might have a tendency to reject any new influence and belief and stubbornly hold on to their previous ideas.

They can be prone to selective communication with people and talk only about meaningful things. They don’t waste time on futile talks, and can be rough when speaking. They are very direct and open in their talk and don’t care much about possibly hurting other people’s feelings.

Many of these people tend to have an almost hypnotic influence on others, especially when they are talking. Some people with this aspect are very open to broadening their horizons, and they go to an opposite extreme being in constant pursuit of new ideas and knowledge.

They can also be very communicative and inspired to talk to almost anyone to broaden their experience.

More often the person will be prone to seeing things in only black and white color, refusing to accept that there are shades and different colors, and people cannot always fit in the molds their mind has created.

They can often experience events that will question their core beliefs and make them change.

These people are often deep thinkers and like to think things through on various subjects.

They often intuitively discover the truth about matters, and it is almost impossible if not impossible to lie to them. They can see through people’s true intentions and intuitively know who they can trust.

Some of people born with this planetary aspect possess psychic abilities and are able to foresee the future events.

Even those who are not psychic have a strong gut feeling which helps them discover things and secrets with accuracy. They are good as investigators and spies.

They can also be good psychologies and psychiatrists because they can easily understand other people’s motives. This aspect often makes people curious and eager to understand the secrets of this Universe and true nature of life.

When they talk, these people tend to be very persuasive and people instinctively desire to trust their words and accept what they are telling as truth. They are usually honest and speak the truth and expect that from others.

Mercury Sextile Pluto transits influence the person in a way that they deepen the intensity of the person’s thinking and their conversations.

This aspect might increase the person’s interest for mystical topics and secretive matters. It might also indicate discovering the truth about some matters or revealing some secrets.

This period might indicate a period of studying some subjects such as psychology, astrology, occult or similar ones.

During these transits you might have a heightened intuition and secret seem to reveal them to you without putting in any effort.

You could also be very persuasive and people might accept your view on matters without giving them a second thought.

This transit might make a person magnetically attractive and center of attention in any company. It might also indicate a period of deep and meaningful conversations with others.