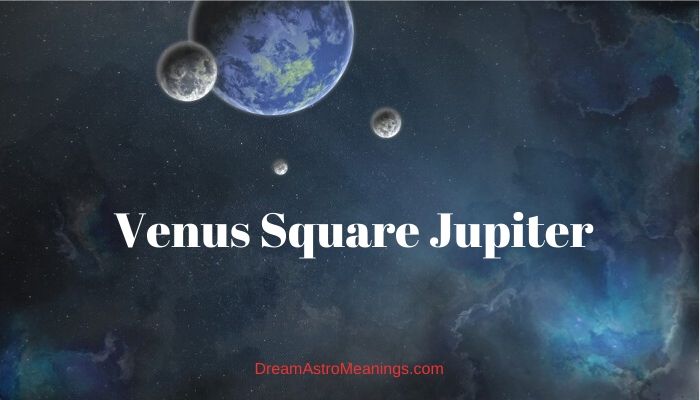 People have wondered since ancient times about the influence of the planets on human life and their destiny.

They analyzed the influence of planets, their meanings in different signs and relationships they made while traveling across the sky. They gathered all that knowledge in a practice called astrology.

Astrology is used to determine person’s characters and their future.

Aspects are relationships between planets created when the planets form certain angles. They give the basic traits to people and determine the major events in the person’s life which usually happen when these aspects get triggered by progressions and transits.

There are different types of aspects but the major division is on major and minor aspects.

These aspects can have beneficial or malefic nature, and their effect in general is a combination of many factors. The major or main aspects are conjunction, square, trine, opposition, and sextile.

Squares are malefic aspects formed when planets are at 90 degrees distance.

They usually create blockages and obstacles and prevent the flow of planetary energy. They often prevent the person from making the most of the planets connected with this aspect or they make it difficult for them to do that.

Besides analyzing individual natal charts, astrology can also be used to analyze relationships and determine their quality and longevity. For that, astrology uses a technique called synastry.

The main goal of synastry is to determine whether two people are compatible or not.

It also determines the issues they will most likely encounter in their relationship and gives advice on how to solve them or avoid them if that is possible.

Although it might be difficult to understand, when people are interacting that also happens with their natal charts. Their planets come into contact and act similarly as in natal charts.

Harmonious aspects create flowing relationships and inharmonious create conflicts and obstacles. The aspects are the most important clues to show the basic compatibility between people.

When the aspects between two natal charts are predominately harmonious, the two people enjoy their interaction and love being together. They are eager to make compromises and accept their partner’s differences with respect.

This is a strong indication of a lasting relationship. The partners have highly compatible characters and interests and their relationship seems like it’s flowing.

If the aspects between natal charts are predominately challenging, this is usually not a good sign for this partnership. It doesn’t always mean that the relationship will be short-lived, but it points out to likely differences and difficulties in maintaining the relationship stable.

Challenging aspects usually indicate difference in characters and basic incompatibility between the partners which could often lead to conflicts, compromises, suffering, putting up with something, and general dissatisfaction with the relationship which can eventually lead to a breakup.

This relationship might emotionally and physically drain the partners, and in the worst cases there might be physical and psychical violence included.

In synastry analysis it is also important to analyze the placements of one partner’s planets into the natal chart of the other partner, and vice versa.

Venus is the planet of romance and romantic love. This planet is the brightest visible object on the night sky after the Moon. This planet is also called “morning star” or “evening star” and was worshiped by many ancient people.

It moves closely to the Sun, and it never distances much (not more than 48 degrees).

Venus, the goddess, was the ruler of romance, beauty, and love in ancient Rome. In astrology, Venus rules these subjects as well.

Venus rules Libra and Taurus and its exaltation is in Pisces. In these signs, Venus is has the most power and feels most comfortable.

People under Venus influence are usually beauty lovers and pay attention to how they look. They love art and are often talented artists. They love to be surrounded by beauty, both by beautiful items and people. Their style is often admired and copied.

These people often choose a profession related to beauty and creating beauty, such as art, fashion, design, etc. They enjoy living in beautiful surroundings and decorating their house.

Their taste is usually excellent and they love luxury and comfort which money can buy. They strive to provide themselves the lifestyle they crave for and usually manage to do that. These people are often fashion followers who love to buy all the latest trends.

Another important thing about people influenced by Venus is that they don’t like to be alone. They often don’t feel complete without a partner, and cannot remain single for a long time. These people are usually very sociable and love to be in company of other people.

The planet Jupiter is the largest of all planets. It doesn’t have solid surface and its composition is mostly hydrogen.

Jupiter is the name of the Roman god of sky who was also the king of all gods in the Roman pantheon.

Since antiquity, Jupiter was considered the planet bringer of fortune and wealth.

It is also the ruler of higher education, professors, and universities. It also rules travel, foreigners, and distant countries.

It rules Sagittarius and is the co-ruler of Neptune. Jupiter’s exaltation is in Cancer. When it’s in these signs, Jupiter feels its best and can show its true nature. In Capricorn, Jupiter is in its fall, which causes its energy to be blocked and lowered.

A well-placed Jupiter in the natal chart is a real blessing for the person. Jupiter can create wonderful opportunities for the person to prosper and follow their dreams.

Jupiter in good aspects to other planets usually provides the person with financial security and enables them a stable and relaxed life. They have many opportunities and a lot of choices.

These aspects can sometimes cause issues with money, like money loss or in worst cases, bankruptcy. They often struggle to make money and don’t keep it long, due to their own actions or outside circumstances.

Jupiter is a generational planet because it spends around a year on one sign, and all people who are born during that year share the traits of Jupiter in this sign.

Because of that, Jupiter should be analyzed through its placement in a natal house, its sign and its aspects.

Venus and Jupiter are planets that have many traits in common. They both love luxury and pleasures, and love to pamper themselves and fulfill their desires. They love money and wealth and they desire a luxurious lifestyle.

This aspect might cause them to spend more than they should and jeopardize their finances as a couple.

They might be inspired to make each other happy by buying each other expensive gifts, or trying to live a luxury lifestyle despite the fact that they cannot afford it at the moment and that can all cause issues in their relationship.

With this aspect it is likely that both partners will experience the same impulses to spend, but sometimes the issues might arise because one of the partners wants to spend money on their partner’s pleasures (like buying them expensive jewelry or clothing, or buying expensive furniture, booking holidays in expensive places and hotels, etc.) which all jeopardizes their joint finances.

This attitude might be disturbing to the other partner (although rarely) or it might occur with their blessing.

The partner receiving the gifts might be completely aware how thoughtless their partner’s actions are but they refuse to keep quiet because they enjoy the attention and gifts they are receiving, even though they know that they will be in trouble because of it.

This aspect requires a lot of control on both sides, because it might seriously jeopardize the couple’s budget even in situations where they are financially well-off. This aspect somehow inspires spending and desire for luxury, and the couple should be aware not to fall into its trap.

This aspect often creates physical attraction between the partners. The Venus partner usually benefits from their partner’s generosity.

Jupiter enjoys giving to Venus and Venus is happy to accept his gifts. This aspect often causes a desire in the couple to show off to others and present themselves in a glamorous light. This can sometimes be just a façade hiding a different truth.

Despite of the challenging aspect this relationship is not a disastrous one. It just inspires to make unnecessary risks, and that is an urge which a couple that is mature and aware of their priorities will know how to control.

This aspect indicates love between the partners who enjoy being in each other’s company and experiencing all kinds of adventures together.

In some cases, the Jupiter partner could be perceived as too adventurous and instable by their Venus partner, who needs someone who is secure and stable by their side.

On the other hand, Jupiter might view his Venus partner as someone who is spoilt and shallow.

This is especially true if the Jupiter person is very interested in developing their spiritual side of personality, and the Venus partner isn’t.

The square aspect between two people’s Venus and Jupiter usually doesn’t bring disasters and breakups in their relationship, although it might be the cause of some stressful situations and disagreements between the partners.

The main issue with this aspect is that it inspires the couple to spend money on luxury items and pleasures even when they are not in a situation for such expenses.

The Jupiter person will most likely be the side who gives more, although Venus might also be inspired to spend money to make her partner happy.

These actions might pose a threat to their financial security and future, but in some cases that thought isn’t enough to stop the couple from spending money they don’t have.

In some cases, the partners will spend the money they have, but they will still be inspired to go overboard and spend more than they should.

This isn’t the case always, and this aspect, even though it inspires the partners to pursue pleasures together, could be controlled if the partners are mature and know what they want.

In some cases, Venus won’t understand her Jupiter partner’s desire for adventures and pursuing their passions, and Jupiter might be annoyed by the Venus’s shallow approach to life and subjects such as spirituality.

This aspect can have different varieties of expression like all other aspects, but in general, the relationship can be a lasting one with a little effort and compromise on both sides.

These partners love each other and there is a strong physical and emotional attraction between them.