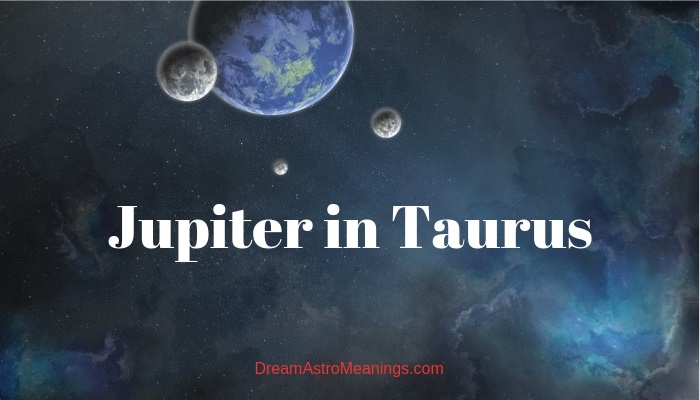 Jupiter is the biggest planet of all the planets in our Solar system. This is a giant planet and has a bigger mass than all the planets combined. This planet lacks a solid surface and is composed mostly of hydrogen.

The Roman god Jupiter gave this planet its name. Jupiter was the god of the skies and thunder for the ancient Romans, and was the king of gods in the ancient Roman pantheon. This deity remained on the throne as one of the most important gods in the Roman Empire, until the rise of Christianity and its acceptance as the main religion.

This planet rules the sign of Sagittarius and it is the most powerful in this sign. Since ancient times, Jupiter was considered the most beneficial planet which helps bring fortune and wealth into our lives.

This planet usually brings good influence unless it is badly positioned in the natal chart in which case it could bring misfortune in a person’s life especially regarding the person’s financial situation.

In most cases of bad placement this planet manifests as lack of opportunities for prosperity and increase and lack of good fortune.

Jupiter in a good placement in a person’s natal chart usually brings fortune and wealth in this person’s life, as well as overall protection of her wellbeing from harmful circumstances which might occur.

People with prominent Jupiter in a good position are often wealthy and fortunate. They reach high positions in society and live a calm and protected life without any financial struggles or worries.

Jupiter is not a personal planet like the Sun, the Moon, Mercury, Venus, and Mars. Personal planets are the ones who transit relatively fast through one sign and have a great influence on an individual’s personality.

Jupiter takes a year to transit through one sign, and is considered a social planet, which influences generations, rather than individuals. This means that all people born within one year will share the same traits of Jupiter in one particular sign. The differences between them will be based on their personal planet’s influences on their personalities.

Jupiter’s placement in different signs of the Zodiac is important, but not as important as the placement of personal planets in the signs; that is why the influence of the planet Jupiter for each individual should be determined by the analysis of its position in a specific sign, as well as its placement in a certain house of the natal chart, and the aspects this planet is making with other planets in a person’s natal chart.

In this text, we will give some information about the specific traits of people born with Jupiter in the sign of Taurus.

Men born with Jupiter in Taurus can be prone to life’s pleasures and self-indulging. These men love luxurious items and lifestyle and will try their best to provide them. If Jupiter is well placed in their natal chart, they are usually blessed with good luck and all their financial endeavors are crowned with success.

They strive towards material wealth, and they often focus on collecting material possessions. They often gather objects of art, or luxury objects, and they also tend to invest in profitable projects, as well as save money in the bank.

They can be spendthrifts if they have Jupiter badly placed, but they are usually careful with their money and pay a lot of thought about the smart ways of investing it.

These men can be hedonists who enjoy buying the best quality things and enjoying other luxuries which life can provide, but they should be careful not to exaggerate and end up in financial trouble.

Men with this Jupiter placement usually have a desire to provide a stable financial future.

Women born with Jupiter in Taurus love to spend money on luxury as well as beauty items.

They are great connoisseurs of quality items and usually don’t hesitate to spend money to obtain them. These women love jewelry and precious stones and are often experts in this area. They love to invest their money in items which gain value through time and have the ability to recognize these items and invest in the right moment.

Some of these women with badly placed Jupiter in their natal charts can be prone to spending beyond their means and jeopardizing their finances, but most of them know how to control themselves and make a balance between spending wisely and overspending.

With positively placed Jupiter in Taurus in their chart, they have the ability to recognize the right project to invest and usually have luck in earning money and increasing their wealth.

They are patient when it comes to making money, and make careful decisions about investing it. In general, these women are focused on creating financial stability for their future and usually manage to establish it through wise financial decisions.

Some of the good traits of people born with Jupiter in Taurus are:

Some of the bad traits of people born with Jupiter in Taurus are:

– spendthrifts, tendency to overspend, making financial decisions based on the desire to please themselves, hoarding material things, etc.

Jupiter in Taurus is a good placement for this planet. Taurus is an earth sign and symbolizes abundance and prosperity, as well as fertility, and in combination with Jupiter which also rules these areas, it could bring great results in a person’s life in terms of financial wellbeing, stability and future prosperity.

Taurus is a fixed sign as well, which in combination with the earth element causes slow but continuous progress and movement forward.

People with this Jupiter placement are usually blessed with good fortune and are financially well-off, unless Jupiter receives some very bad aspects from other planets. If Jupiter is well aspected, Jupiter in Taurus ensures prosperity and financial stability of the person.

These people are prone to acquiring material wealth, often in the form of luxurious items or artwork. They tend to increase their possessions through the years and their main focus is on ensuring financial security for themselves and their family members. They usually do it with ease.

Jupiter in Taurus makes people born with this placement indulge in life’s pleasures and creates true hedonists. The sign of Taurus rules pleasure and hedonism, and Jupiter always increases things ruled by the signs it finds itself in.

That is why these people can often become overindulgent and pleasing themselves way too much. It also gives a tendency of laziness and procrastination because things seem to come to them easily and without any effort put in.

If Jupiter is badly aspected in their natal chart, these people can be egotistic and very materialistic, prone to collecting material wealth beyond actual needs and just for the sake of collecting it and not enjoying in it.

Their desire to accumulate wealth can sometimes push them into doing immoral or even illegal things to acquire it.

The sign of Taurus rules beauty, luxury, arts, and money in general. That is why these people are often prone to collecting wealth in luxurious or artistic objects of beauty. They love jewelry and often have great collections of jewelry.

They also love investing in art and other forms of beauty. They often invest in different kinds of luxurious possessions. They love the security money provides for them, and they often have a substantial amount in banks as savings.

The planet Jupiter rules distant travels and foreign cultures, but when it is in Taurus it gives the person love for travel which will involve a dose of luxury and exotics.

These people are often very generous and enjoy sharing their blessings with others, especially the ones they care about. They are usually blessed with good fortune in the area ruled by the house where Jupiter in Taurus is placed.

Their main trait is love for material possessions and if Jupiter is well-placed in their natal charts they will most certainly be blessed with them.

If Jupiter in Taurus is not placed well in their natal charts, these people could also be prone to overspending and buying luxurious items beyond their means, thus jeopardizing their financial stability.

They often have a struggle with self-control when it comes to spending money, and they should learn to set their priorities in the area of finances. With badly placed Jupiter in Taurus in their natal charts, that often seems very difficult for them to do.

When Jupiter in Taurus is well aspected in their natal charts, they can be prone to spending much, but they will often find a fortunate way to recompense their losses and manage to stay financially secured.

These people love to give people gifts and they enjoy spending money on other people.

They are never sorry to spend money to make someone they care about happy. They also love receiving gifts and are very appreciative for any act of kindness and generosity made towards them.

These people know what quality is and desire only the best for themselves. They never feel sorry or guilty spending money to make themselves or someone else happy. They love the best perfumes and clothing, as well as the best quality food. Their home is usually beautifully decorated with luxurious items.

If they can’t afford everything in their apartment to be luxurious and the best quality, these people will at least try to have several of these items around them with a tendency to have even more of them in the future as a goal.

These people usually make wise and thoughtfully planned decisions about their investments and they tend to grow and increase their wealth through time. They usually profit from investing in anything which provides steady growth through time (like agriculture, or stock shares).

Because Jupiter stimulates growth, and that practically refers to the area ruled by the sign and house it occupies, in case of Jupiter in Taurus it can cause people born with this placement to have unusually long necks because Taurus anatomically rules the neck area.

The planet Jupiter transiting through different signs influences whole generations of people who are born during a period of around one year, which is how long it takes Jupiter to pass through one sign.

Because of that, its influence on an individual should be viewed as a combination of different factors, like the sign it is in and its house placement, as well as the aspects Jupiter is making with other planets in the person’s chart.

People with natal Jupiter in Taurus are connoisseurs of beauty and quality. They also love to collect material goods, which gives them a sense of financial security.

These people often collect luxurious items, like jewelry, artwork, expensive furniture, antiques, etc. and that is often considered as a form of investment combined with pleasure they have in possessing these items.

They are prone to saving and investing wisely into long term projects, which tend to grow in time.

If Jupiter is badly placed in their natal charts, these people can be prone to overspending and jeopardizing their finances with buying items beyond their means, just to satisfy their need for luxury.

Fortunately, not many of them cannot control their spending urges, and end up broke.

They prefer the feeling of security and peace which money in the bank provides for them, and they usually choose to feel safe and secure, rather than spend money.

By making wise financial decisions these people usually manage to provide a substantial amount of wealth and material possessions, which could keep them relaxed for the rest of their lives.